Huge news for Rob Kardashian — his ultra-rare Tom Brady football card has been formally graded as “Gem-Mint Condition” … meaning he’ll get top dollar if he chooses to sell!

As we previously reported, Rob — a lowkey trading card enthusiast — bought a case this week of 2020 Panini Mosaic Choice (hobby) cards … which usually runs for about $10,000.

Fortunately for him, he pulled the Holy Grail — a Tom Brady MVP Nebula parallel that’s a rare 1-of-1 card that collectors are going crazy over.

The condition of the card is a big deal in the high-level collector community — in other words, a card that’s graded anything less than a perfect 10 could mean the difference of 10s of thousands of dollars on the open market.

Rob, with the help of his pals at The Bullpen card shop in L.A., immediately sent the card over to PSA — one of the top authentication and grading companies in the industry.

The card was inspected and on Friday, Rob got the good news — it’s a perfect 10, gem-mint condition!

Our sources tell us Rob hasn’t decided whether he’ll sell the card or keep it in his private collection … either way, he’s a winner.

We’ve spoken to multiple memorabilia experts — who all agree it’s tough to predict the exact value of the card, but most agree Rob could likely get 6-figures.

Mitch Guttenberg, who owns The Bullpen, put it to us this way:

“It is a first-year Panini NFL Mosaic of the GOAT, Tom Brady in his Pats uniform and it is a 1/1 Nebula which in itself is huge. This significance of having a PSA 10 increases the value at least 5x.”

“People can argue all day long what the value is but we won’t know unless Rob decides to sell it. Then we can end the speculation. The amount of attention Rob is bringing to the hobby is fantastic. He is a great dude and his collection just got a lot better.”

By the way, Rob pulled some other insane cards out of his box … landing some cool Tua Tagovailoa autographs and a super rare Justin Herbert card — which also got a perfect grade Friday! 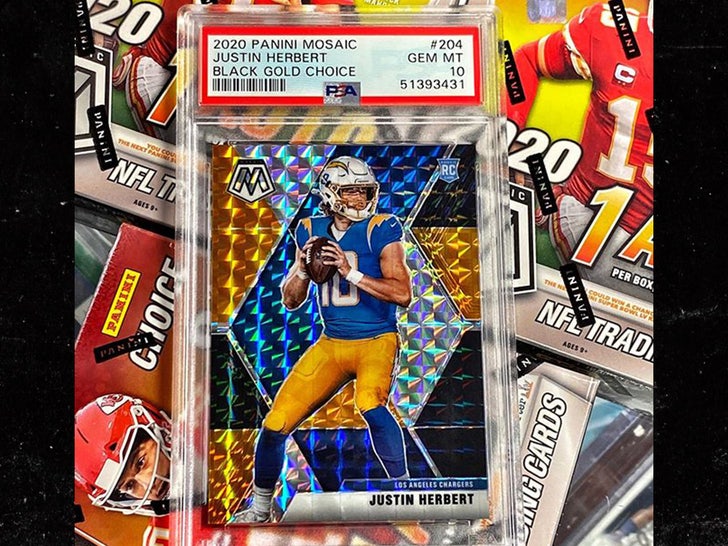