Rita Moreno lamented celebrities’ inability to please everyone while defending her friend and collaborator, Lin-Manuel Miranda.

The actress appeared on “The Late Show with Stephen Colbert” Tuesday where she discussed her career and working as an executive producer alongside Steven Spielberg on the remake of the film that made her famous, “West Side Story.”

After dazzling the crowd by dancing with the host’s in-house band, the 89-year-old EGOT winner insisted on taking a moment to address the criticism that forced the “In The Heights” creator to apologize to the Afro-Latino community for underrepresenting them in the recent film adaptation.

On Monday, Miranda took to Twitter to respond to criticism of the film alleging that he neglected to depict the dark-skinned, Afro-Latino population of New York City’s Washington Heights neighborhood where the story takes place. While Miranda admitted he “fell short” and promised to do better in future projects, Moreno noted that the criticism of the man who produced her recent documentary, “Rita Moreno: Just a Girl Who Decided to Go for It,” felt unfounded.

“Can we talk for a second about the criticism of Lin-Manuel?” she asked the host. “That really upsets me.” 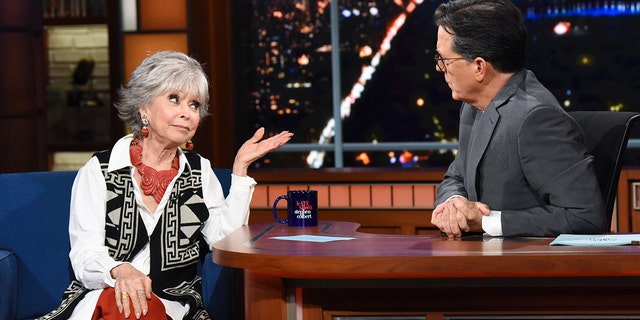 The star went on to lament that there’s no escaping criticism in show business, even for people like Miranda who have dedicated their careers to showing underrepresented characters and stories.

“You can never do right, it seems,” she lamented. “This is the man who literally has brought Latino-ness and Puerto Rican-ness to American. I couldn’t do it. I’d love to say I did but I couldn’t. Lin-Manuel has done that really single-handedly.”

Colbert asked if she felt the criticism about colorism in “In the Heights” was unfounded, or if targeting someone like Miranda about it was what made her upset. Moreno responded by noting that the Latino community comes in many different colors and suggested calling for full representation when there was previously none may hurt efforts to see more in the future.

“Well, I’m simply saying, can’t you just wait a while and leave it alone?” she said. “There’s a lot of people who are Puerto Rican who are also from Guatemala who are dark and who are also fair. We are all colors in Puerto Rico. This is how it is. It would be so nice if they hadn’t come up with that and left it alone, just for now. They’re really attacking the wrong person.”

Earlier in the interview, Moreno discussed the importance of representation for her own successful career. While she’d worked for years prior, Colbert noted that perhaps her biggest claim to fame was in the role of Anita in the 1961 adaptation of “West Side Story.”

“I come from an era where there were no role models, none, there were no mentors and it took me forever to find someone I could model myself on,” she told the host. “And it turned out to be Anita. This was a Latina woman who had dignity, who had self-respect. I never got to play a Latina like that before.”

She noted that the only roles for a Latina actress like her prior to Anita were more stereotypical and negative.

“I did a lot of stuff like that for years and years and years, and then I found this wonderful character, Anita,” she said. “And, you know, the Oscar followed and a Golden Globe, you know, when it was important.”

Despite defending Miranda from race criticism, the artist’s reference to the Golden Globes was a specific dig at The Hollywood Foreign Press Association, which puts on the show. It recently came under fire after it came to light that the organization lacked a single Black voting member, and faced accusations of somewhat unprofessional behaviors and accepting gifts from competing productions.

As a result of the scandal, NBC announced it would not air the Golden Globes in 2021.