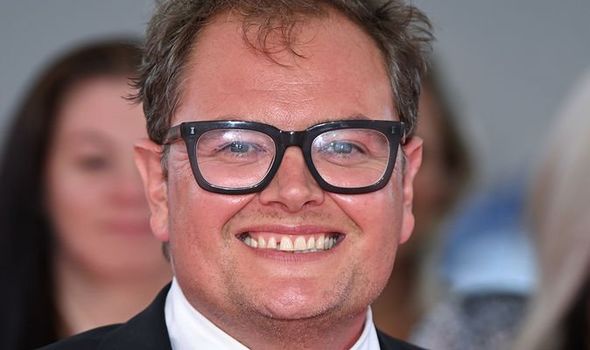 The comedian said it was a “dream come true” to present the 94th annual show at the Royal Albert Hall in central London last month, as well as greeting the Duke and Duchess of Cambridge after the show.

The 45-year-old said: “I just love the show, and it’s absolutely mad because of who you are rubbing shoulders with, and then, of course, the royals will be there and that adds another level of nervousness.

“My dad was crying because he was so proud, which is so sweet. My mum had never, ever been to the Royal Albert Hall.

“My mum and dad are mentioned in my monologue but had I told her I would be slagging off her Christmas dinner she wouldn’t have turned up.

“She did look very glam and I felt very proud of my mum, and my dad had a dickie bow on which was very odd to see.” But he said he “deserved” his glass of bubbly when he came off stage.

Alan said he “loved” the show when growing up and recalled first being asked to perform in it in 2005.

What is happening where you live? Find out by adding your postcode or visit InYourArea

He said: “Just thinking back to 2005, just sitting in the canteen in Cardiff with Shirley Bassey, the Blue Man Group, Cliff Richard, it just felt all very odd, and now I’m the one hosting and that’s the wonderful thing about showbiz – these kinds of things happen.”

Among the array of stars taking part were Ed Sheeran and Rod Stewart and Gregory Porter.

Alan dressed up in a muscle suit and joined former America’s Got Talent contestants the Messoudi Brothers on stage.

He said: “There was a real camaraderie and a buzz because everyone had a good one. It felt very modern and up to date and there was something for everyone and they got it just right.”

The cash raised helps people from the world of entertainment.