President Joe Biden personally called the family of George Floyd to discuss the murder conviction of his killer, former Minneapolis Police officer Derek Chauvin. After just 10 hours of deliberations, a Minnesota found Chauvin guilty of second-degree unintentional murder, third-degree murder and second-degree manslaughter in Floyd’s May 25, 2020 death. Biden told Floyd’s seven-year-old daughter Gianna that her daddy “did change the world,” as his death set off nationwide protests about police brutality and systematic racism.

In statements made live from the White House, Biden revealed “I just spoke with George Floyd’s family again. A remarkable family of extraordinary courage. Nothing can ever bring their brother, their father back. But this can be a giant step forward in the march towards justice in America ” He later continued, “What I just discussed with the Floyd family, the guilty verdict, does not bring back, George. But, through the family’s pain they are finding purpose. So George’s legacy will not be just about his death, but about what we must do in his memory.” 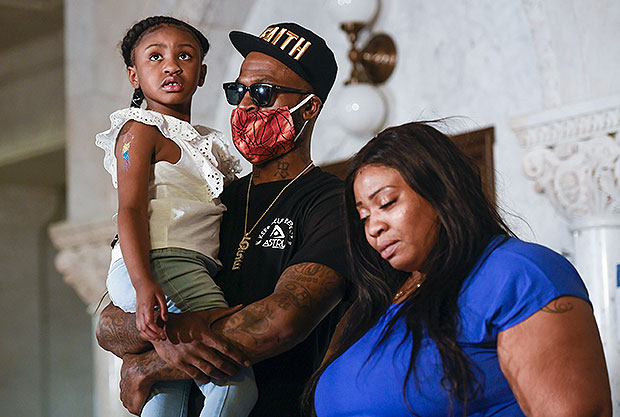 Biden said he talked to Floyd’s daughter. “I also spoke to Gianna, George’s young daughter. I met her last year, I’ve said this before, at George’s funeral. I told her how brave I thought she was, and I sort of knelt down hold her hand. I said daddy’s looking down on me so proud, said to me then and I’ll never forget it, ‘Daddy changed the world’. I told her this afternoon you daddy did change the world. Let that be his legacy, a legacy of peace, not violence.”

Biden also called lawyer Benjamin Crump, who was with George Floyd’s family in the courthouse in Minneapolis. Biden told them over speaker phone in video obtained by CNN, “You’re an incredible, incredible family. I wish I was there to put my arms around you. We were watching ever second of this, and the vice president…We’re all so relieved, not just with one verdict but all three counts. It’s really important. I’m anxious to see you guys. We’re going to get a lot more done. A lot.” Earlier in the day before the verdicts came down, Biden told reporters at the White House, “I’m praying the verdict is the right verdict. Which is, I think it’s overwhelming in my view.”

Biden then passed the phone to Vice President Kamala Harris, who told those gathered that, “I’m just to thankful to the entire family. Your courage, commitment and strength has been a strength for so many. And this has been a day for justice in America. And your family has proven themselves real leaders when we needed you. And in George’s name and memory, we’re going to make sure his legacy is in tact and that history will look back at this moment and know…we’re going to make something good come out of this tragedy.”