Just as Amtrak train number 82 pulled into Delaware, Joe Biden’s home state and the site of his campaign headquarters, CNN called it. Donald Trump was done. Seventy-four minutes after departing from D.C., Trump’s Washington was literally in the rearview and Pennsylvania, which had just clinched it for Joe Biden, was a few miles ahead.

“This is Wilmington,” announced the conductor, a moment later. Coach class burst into rapture. Applause. Tears. Supertramp! “Goooooodbye Stranger” blared from the laptop belonging to Louis Sotomayor — “Like Sonia, but no relation!” — a 47-year-old math teacher and Baltimorean. “Isn’t that appropriate, after five days of waiting, to come in this morning and get the good news in Delaware,” he remarked, between sips of an IPA. “I haven’t felt this optimistic in a long time.” The woman behind him piped up: “Same here.”

Passengers rushed to the windows to snap pictures of the Wilmington signpost. Somewhere just beyond was the soon-to-be 46th president of the United States — better known as “Amtrak Joe” around these parts.

“I used to ride this thing every day and nobody paid any attention,” Biden has said of this train line. Amtrak was always a symbol of his moral choices in life. After his first wife and daughter were killed in a car crash shortly after his election to the Senate in 1972, he rode these rails from Washington, D.C. to Wilmington each night to care for his two sons. The commute kept him grounded, he insisted. It was the unflashy antithesis of his opponent’s longtime shuttle: an airplane stocked with a double bed and a fake Renoir and his name slapped on the fuselage.

A few minutes later, the train reached Philadelphia. Trump’s former campaign manager, Brad Parscale, once likened the president’s re-election machine to the Death Star. If so, Saturday afternoon in Philly was like the forest moon of Endor at the end of Return of the Jedi.

“What a great day,” shouted Sterling Wilson, a 31-year-old real estate developer standing in a crowd of thousands outside of City Hall, singing along to Bon Jovi’s “Livin’ on a Prayer.” “Everybody’s been on pins and needles all week, man,” he said. “Dignity is returning to the United States, and particularly, the White House.”

Fireworks exploded over London and church bells rang in Paris. But in the end, it was all about Philly. This city delivered the votes that brought the curtains crashing down on the Trump show. The swampiest of satraps tried, however half-assedly, to slime the nation’s birthplace. Lapdog Lindsey Graham called Philly “crooked as a snake.” Ted Cruz cried that it was “the worst in the country”. Lou Dobbs dubbed it “a cesspool electorally.” And Trump himself had huffed that “bad things happen in Philadelphia.”

“I think good things happen in Philly,” says Anna Moye, 42, who was standing outside of the Pennsylvania Convention Center, which had been the white-hot center of the state’s vote count all week long. “We got the first African-American female in the White House and Joe got more votes than any president,” Moye said. “This is once in a lifetime.” 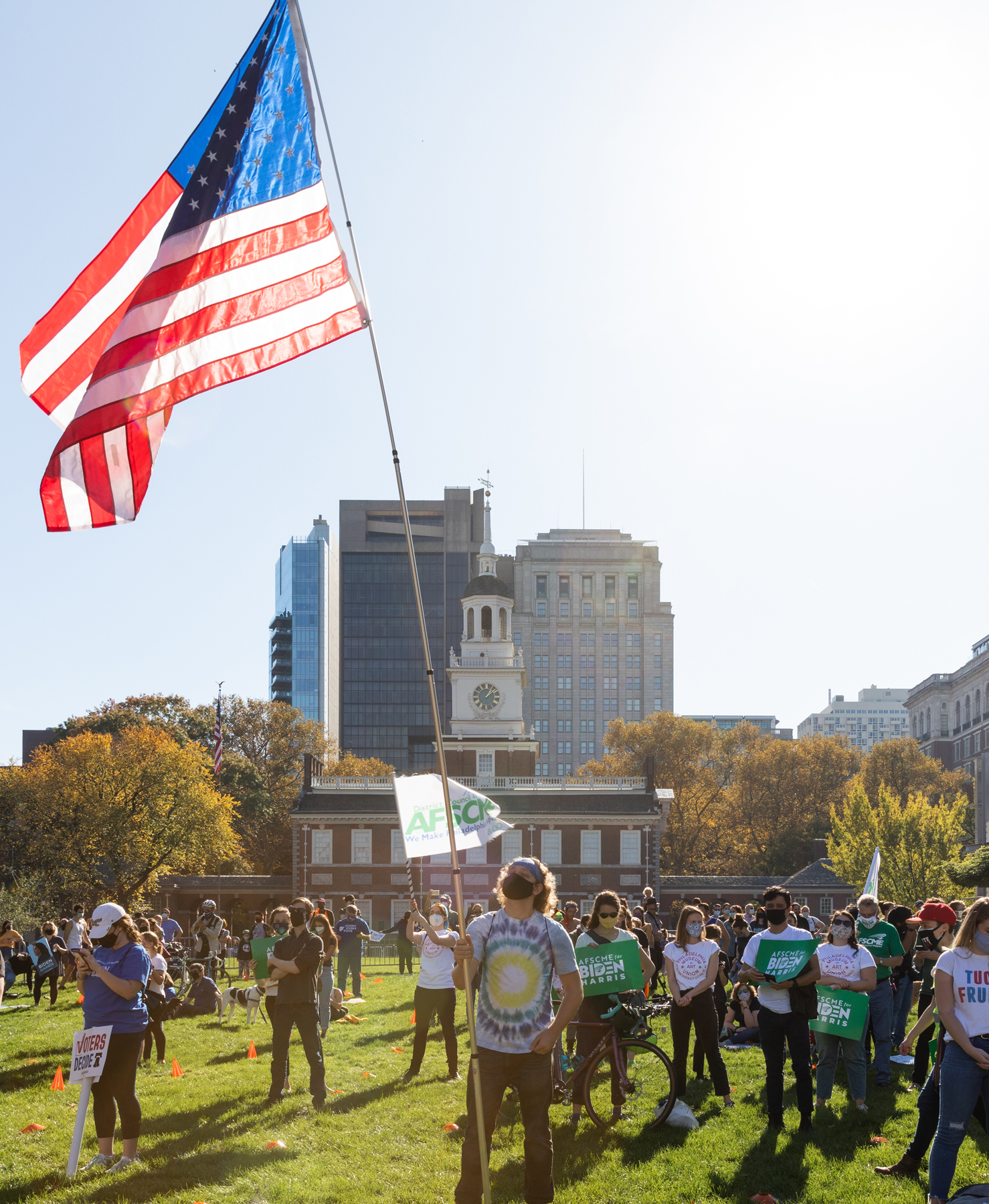 Joe reps Scranton but his wife, Jill, grew up here. “America’s going to get really familiar with Philadelphia accents,” said Jake Tapper, a son of Philly himself, while anchoring coverage on CNN that day.

Philly’s democratic mayor, Jim Kenney, told Rolling Stone that the parties in the streets were a “joyous manifestation of many things. One is relief that the Trump administration — which has vilified Philadelphia as a welcoming city for nearly five years — will soon be over.”

A remaining few MAGA loyalists languished behind barricades outside of the convention center, blasting an old speech by the president. Craig Cougle, a 62-year-old Verizon employee, shook his head at the sorry spectacle. “That voice, every time I turn on the TV,” he said. Cougle could hardly wait for the day that he’d never have to hear it again. “I’ve been depressed for four years,” he said. “I was shocked that people voted for this guy. I grew up in Northeast Philly” — the parochial, Trump-loving neighborhoods of working-class white people on the city’s edge — “and right now I’m living in South Jersey, surrounded by Trumpers. I found out a lot of my friends are not my friends.”

One man held a sign depicting Gritty, the deranged mascot of the Philadelphia Flyers, devouring the president. It read: “This is Philly, we eat assholes like u 4 lunch.” Nearby, hundreds streamed onto the lawn of Independence Hall, where the Declaration of Independence and the Constitution were formed. A woman hung her head out of a Ford Explorer and screamed, “He’s fuckin fired!” The whole block whooped in response.

A groovy day, no doubt. Still, this is Philly we’re talking about. It’s a rough town even on the giddiest of occasions. “If there’s something to like, I fucking hate it,” said Pat Degan, 34, standing on a street corner in South Philly, sucking down a Marlboro light. “I told my wife, there’s no reason to celebrate something that happens every four years. Guess what’s going to happen in four more years? We’re going to do the same fucking thing again.”  C’mon, man. This is different.

“What, that orange asshole?” he shrugged. “He’s going to run again. 100 percent. Why wouldn’t he?” Ahh, that sunny Philly spirit. 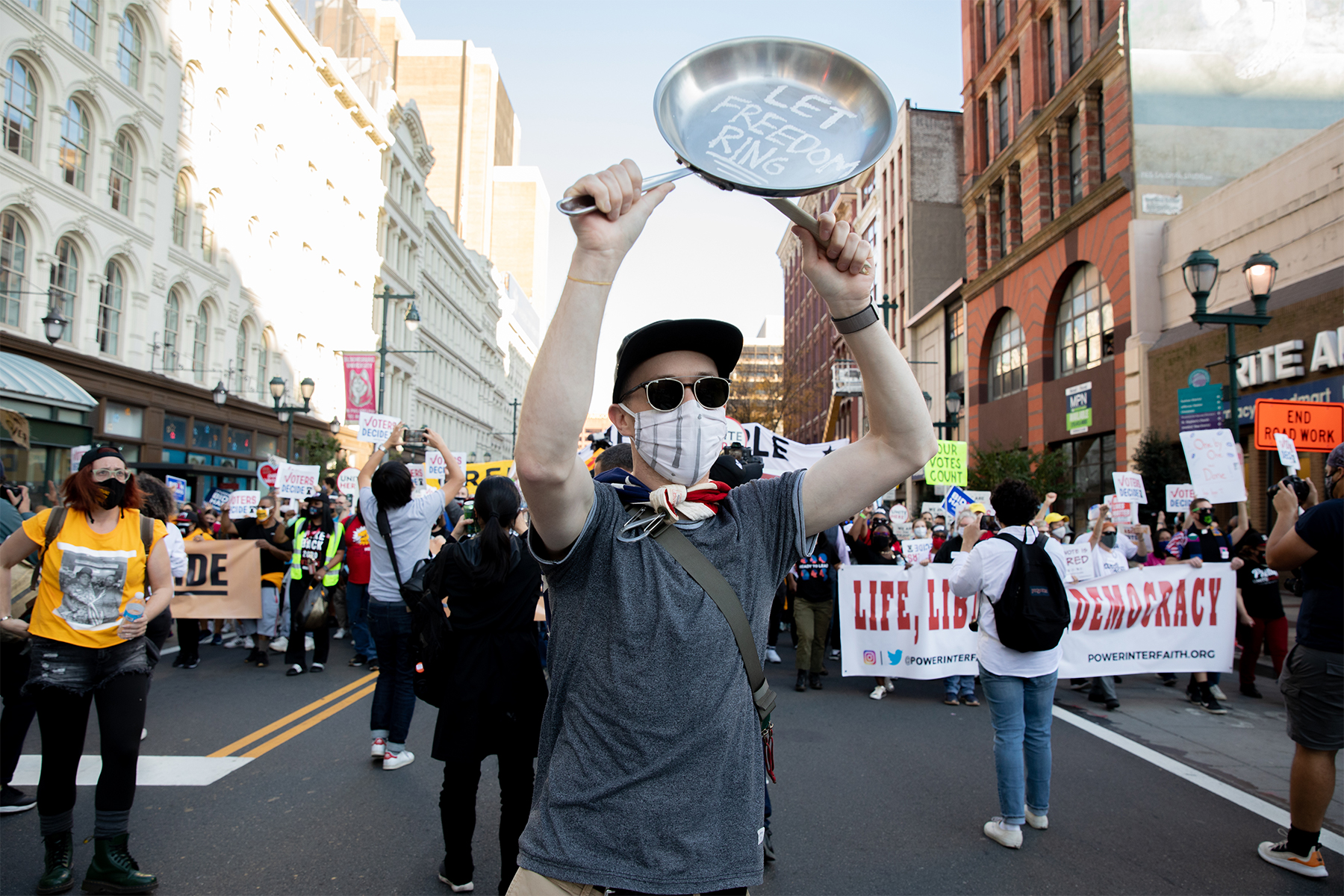 But not everyone was so jaded. “This was my first time voting,” said Sofia Graziano, a 19-year-old Jersey girl and physics major at the University of Pennsylvania. “It was soooo exciting.” She could hardly get the words out fast enough. “Everybody told me to mail in vote, but I wanted to do it in person!”

Graziano was standing on Market Street, clutching a sign that read “Joe Biden got that WAP,” as in, Wet Ass Presidency. “I am so excited to get a woman into office, Vice President Kamala Harris,” she beamed, her red mane glinting in the November sunlight.

“And I am so, so excited to get that man out of office.”