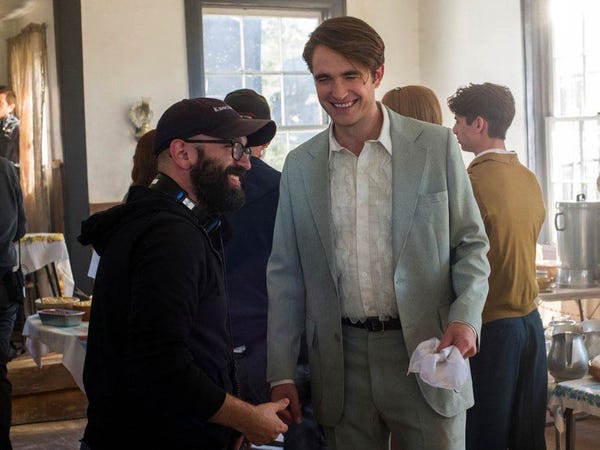 Though director Antonio Campos has been making movies for over 15 years, his latest, "The Devil All the Time," marks the first time that he's working with legitimate movie stars.

But with "The Devil All the Time" Campos has leveled up big time.

Backed by Netflix to adapt the popular Donald Ray Pollock novel, Campos is not just getting the largest audience ever to his work but attracting the likes of Robert Pattinson, Tom Holland, Bill Skarsgård, Riley Keough, Sebastian Stan, and Mia Wasikowska to come along for a story featuring a collection of troubled people and their interconnecting lives set in post World War II Midwest.

It could potentially be a lot of pressure for a director, not just working with big-name actors but also making sure that an ensemble like this gets the proper screen time. But Campos said he didn't feel intimidated by that pressure because he's looking for actors that aren't, as he put it, "divas."

"When I cast someone or want to work with someone it's because I feel like not only are they talented but they are good people and fun to be around," Campos told Insider. "I don't really have a lot of patience for people who are unpleasant and moody and complicated."

To make sure he wouldn't have anyone with huge egos on his set, Campos cast "The Devil All the Time" with actors he felt a connection with.

Some were people he built friendships with over time, like Robert Pattinson, who plays pastor Preston Teagardin in the movie. The two began hanging out when Pattinson was in New York making 2017's "Good Time."

Others were formed through general meetings he had, like Riley Keough and Bill Skarsgård.

"Riley was someone I got coffee with and we hit it off," Campos said. "Bill and I bonded right away because we were both having our kids two weeks apart."

Crafting a collection of actors he trusted helped a lot in building a fun and relaxed environment on set, Campos said. But he admits there was one actor that was a thrill to work with and that was Tom Holland.

"I've had good success working with young people," Campos said. "My first film was with Ezra Miller, so I really like working with young actors because I find that they are just so excited and passionate. There's nothing that's old hat to them."

He said that was certainly evident as he teamed with Holland, who is in his early twenties, to bring the movie's main character, Arvin, to the screen. Similar to the rest of the stars on the project, Campos said Holland didn't come with any ego, even though he's known the world over for playing Spider-Man in the Marvel movies. However, the indie-rooted Campos admits at the time of making "The Devil All the Time" he hadn't seen him play the superhero so he wasn't aware of how huge of a star he was.

"I knew him from his theater work and being the kid from 'The Impossible,'" Campos said, referring to the 2012 movie in which he stars opposite Naomi Watts and Ewan McGregor as a family caught in the tsunami that hit Thailand in 2004. "Peter Parker wasn't in my head, to me he is this thoughtful British guy."

Reflecting on why a movie with all these stars wasn't overwhelming, Campos said the biggest reason was everyone had the same goal.

"Everyone comes into this kind of project for the right reasons, which is they want to make something cool and interesting and they maybe want to go to a place they haven't gone to before as an actor," Campos said. "So they are there for the right reasons. They are there to challenge themselves and dive into the material. It's not about the money it's about the experience and because of that you feel everybody wants to be there and everybody is just giving everything to the role and the scene."

"The Devil All the Time" is available now on Netflix.