Fear Street looks set to bring the nostalgic thrills and chills on Netflix in July – and could well fill the Stranger Things hole in your life.

Based on RL Stine’s best-selling horror series, the upcoming horror movie trilogy is getting a unique release on Netflix, with one movie release per week. The three movies take place in different years – 1994, 1978 and 1666, respectively – and tell separate stories that tie into one overarching narrative.

Fear Street is set in the fictional town of Shadyside and begins in 1994 when a group of teenagers find themselves at the centre of a centuries-old mystery. They discover that the terrifying events that have haunted Shadyside for generations may all be connected and, what’s worse, they could be the next targets.

With an exciting young cast that includes Stranger Things stars Maya Hawke and Sadie Sink, the ambitious trilogy is sure to blend horror homages with retro charm in a similar fashion to Netflix’s hit series.

“We filmed all three Fear Street movies over one crazy, bloody summer,” said Leigh Janiak, who directed and co-wrote all three movies.

“It’s a dream that audiences now get to experience the story in the same way – back to back to back, with only a week of waiting in between. I can’t wait to welcome everyone into the world of Fear Street in 1994, 1978 and 1666!”

According to Bloody Disgusting, the second movie is set at Camp Nightwing in 1978 as campers and counsellors must band together to solve a terrifying mystery, linked to Shadyside and neighbouring town Sunnyvale’s shared history.

The third movie, set in 1666, focuses on a hysterical witch-hunt that ends up having deadly consequences for centuries to come, suggesting it’ll explore the origins of the trilogy’s central mystery.

Shadyside might not be Hawkins, but Stranger Things fans should feel right at home and the trilogy will make the wait for season four that little bit easier. The trilogy has even met the approval of the series creator, RL Stine.

“Fear Street fans are in for a treat – and some major surprises. Readers know that the book series is rated PG. But the movies are rated R. That means a lot more thrills – and a lot more terror,” he enthused.

“I have seen Leigh Janiak’s epic trilogy releasing on Netflix in July and I can tell you the scares and the screams are more than I ever expected. What fun to see the horrors of Shadyside come to life!”

Excited for Fear Street? Here’s everything you need to know about the trilogy. 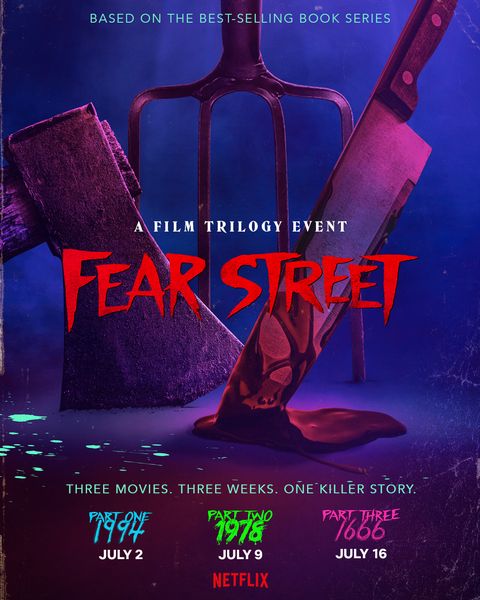 With each movie set to tie into one overall story about the dark mystery at the heart of Shadyside, you could choose to save them all up and binge them in one go on July 16 if you can resist the temptation.

But part of the fun will likely be guessing what’s going to happen next and coming up with theories, much like you would for a ‘normal’ movie trilogy released years apart.

Even though the three movies take place in different years, there will be some cast members that appear in all three movies, including Kiana Madeira as Deena, Olivia Scott Welch as Sam, Benjamin Flores Jr as Josh and Ashley Zukerman as Sheriff Nick Goode.

Maya Hawke appears in the first movie only as Heather, while her Stranger Things co-star Sadie Sink appears in the second and third movie as Ziggy Berman.

Community‘s Gillian Jacobs stars in the second and third movie as C Berman, likely some connection to Sink’s character. 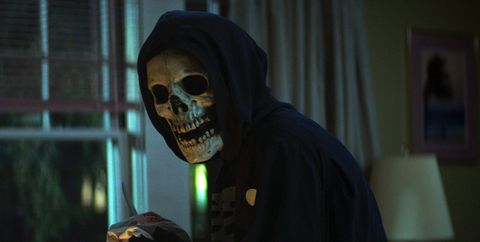 Interestingly, even though it’s set in 1666, the third movie features a lot of the same cast, potentially in different roles or it could mean some 1994-set or 1978-set sequences in the third movie.

The main cast lists for each movie are as follows:

We got a very brief look at the trilogy in late April when Netflix released a sizzle reel of its upcoming movies, before the streaming service released the first teaser in May.

If you missed it above, you can check it out below:

While the teaser might be light on footage, we do get more of a sense of the overarching story to the trilogy and it seems to revolve around a witch’s curse: “She’s been possessing people, turning them into killers to take revenge. It happens in Shadyside over and over.”