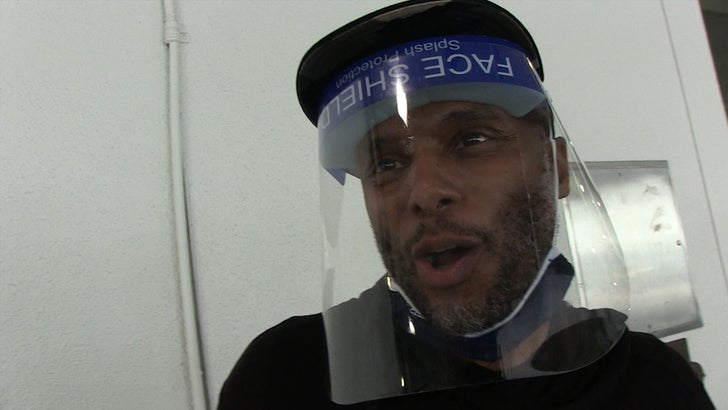 R&B star Kenny Lattimore says his music sales SKYROCKETED thanks to that memorable scene from “The Last Dance” featuring Michael Jordan rocking out to his songs more than 20 years ago!

In other words, THE MJ EFFECT IS REAL, YO!

You remember the scene … MJ was on the Chicago Bulls team bus, on the way to Game 1 of the 1998 NBA Finals, when someone asked what he was listening to on his headphones.

Jordan bragged he had some unreleased Kenny Lattimore tracks — and seemed to really dig it.

So, when we saw Lattimore at LAX the other day, we had to ask if the cameo in the docu-series spiked a surge in music sales.

“There’s so many people from around the world that started following me, sending me messages [because of ‘The Last Dance].”

“People were like, ‘This is Jordan’s guy’ or ‘I’m gonna listen to this ’cause this is what Jordan listens to.'”

Lattimore says his music sales went “to another level” thanks to the doc — noting streams of his songs were up big, too.

If you’re not familiar with Lattimore’s music … GET ON YOUTUBE ALREADY AND CHECK IT OUT!

Dude was huge in the ’90s and even got a Grammy nod for his smash hit “For You.”

As for Jordan, Lattimore ended with this — “Blessings to Michael Jordan forever. I am so grateful of him being a fan.”