Meghan Markle shared some inspiring and uplifting words to students at Robert Clark School. A year ago, to celebrate International Women’s Day, the Duchess of Sussex visited the Dagenham, England, school in honor of the holiday.

In a letter to the school, which it shared on Thursday, Prince Harry’s wife wrote thanking them for the “fond memories” they gave her and acknowledged how “difficult it’s been for students and families during the past year” amid the coronavirus pandemic.

Meghan wrote that on IWD she encourages “everybody to participate in real acts of compassion for the women in their lives and their community.” She also suggested to “learn about the trailblazing women who came before us.”

We had a very special delivery this week. It has been lovely to share this letter and advice with the students and remember our International Women’s Day celebrations last year. #IWD2021#iwdpic.twitter.com/wLDisgETwp 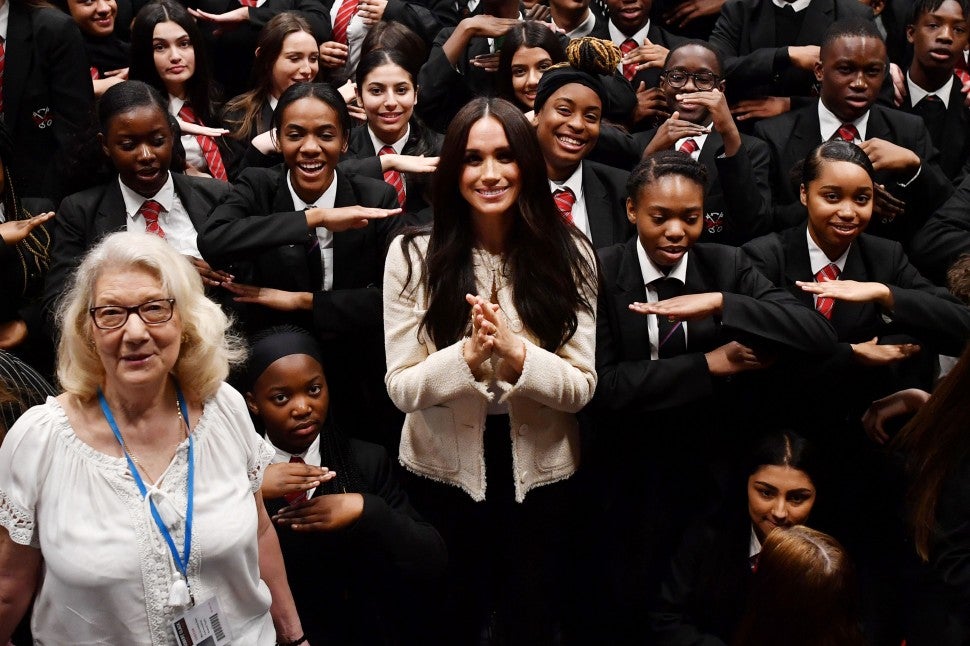 She continued by writing that she was “recently thinking about Geraldine Dear,” one of the original women who fought for equal pay in the 1960s.

“Without women like Geraldine, who formed part of the original group of women advocating for equal pay, so much of what we do now wouldn’t be possible. By knowing and appreciating legacy, we can—and you can—find inspiration to create legacy,” she continued.  “All of you, the young women and young men here today, will continue paving the way for a better and more compassionate future. Last year, I told you that your voices have the ability to change the world. I hope that you are continuing to make your voices heard.”

“Small acts of compassion have the power to make a real and lasting difference, and I thank all of you for the kindness you provided me during my visit,” she added, also recalling the young man, Aker Okoye, who went on stage with her during her visit. 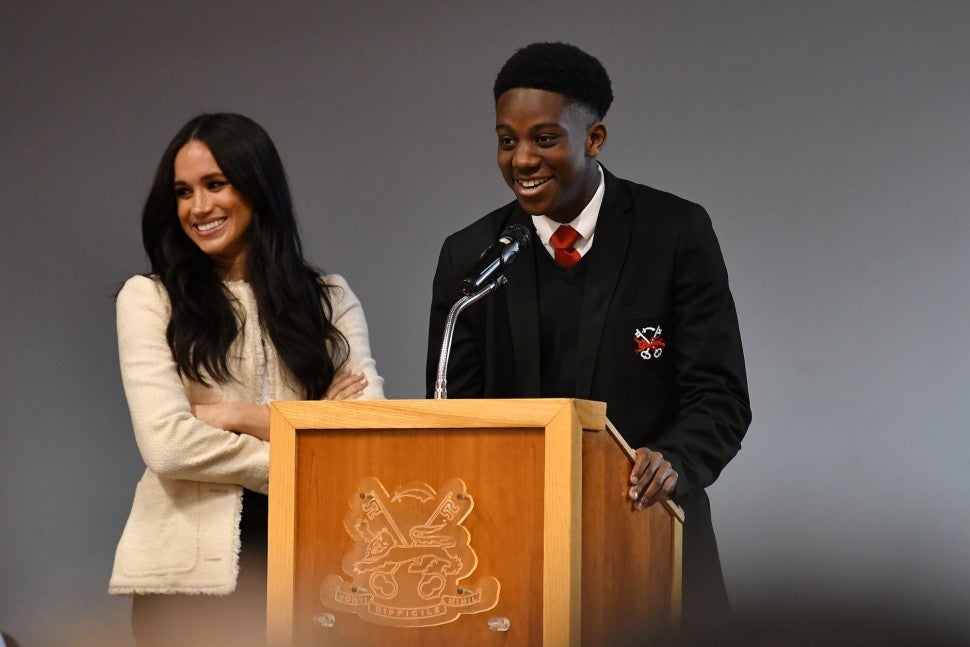 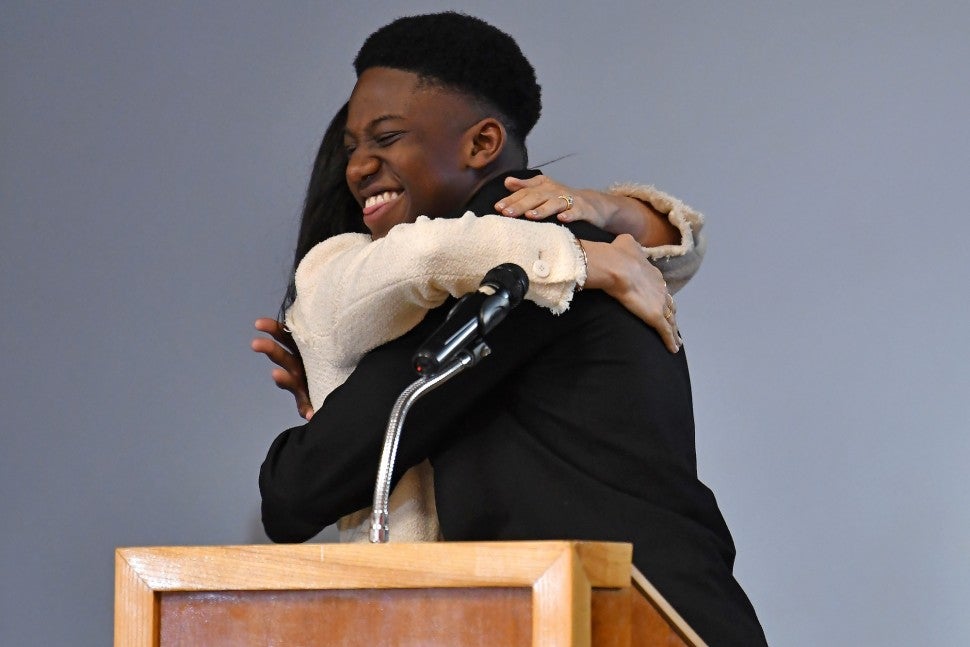 She concluded by noting, “P.S. I still have the Debate Society team jacket you gave me with me here in California and wear it often. Thank you again for thinking of me!” 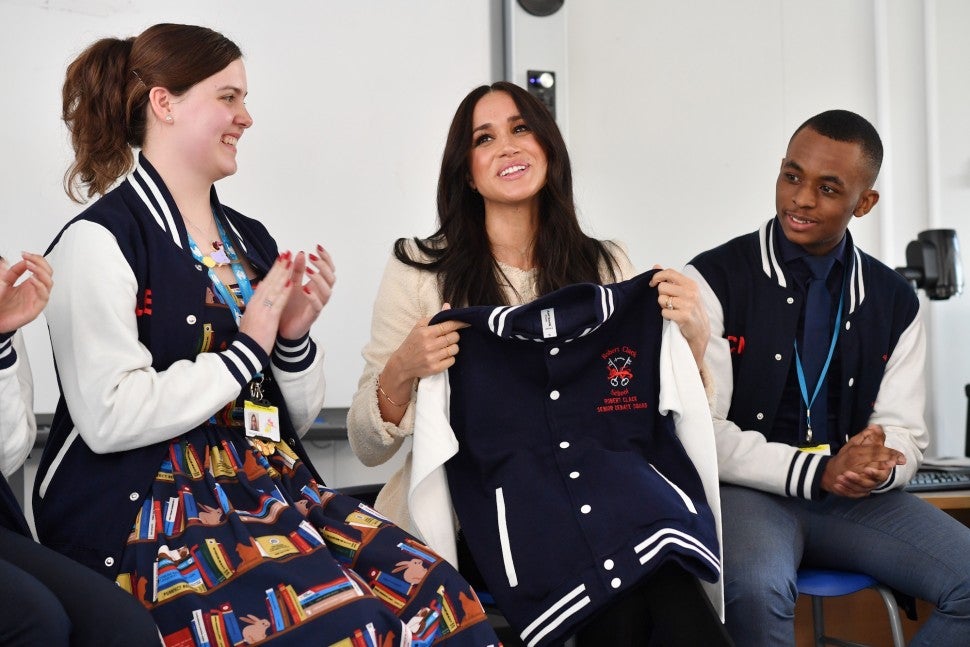 ET actually spoke with Aker following his meeting with Meghan, and jokingly apologized to Harry in a letter for “cuddling his wife.” Calling the moment he hugged Meghan “the best moment of my life thus far,” Aker also explained why he penned an apology letter.

“It was probably to clear everything up,” he said. “If that was my wife and I had this random child [hug her] … I don’t think he’s threatened by it [but] I thought it was polite to do so. It was out of my own kindness. If Meghan Markle wasn’t as big as she is, I would still say sorry for that. I just thought it was genuinely polite to do so. It didn’t feel as if I was forced into it.”

Meanwhile, on International Women’s Day, photographer Misan Harriman shared a never-before-seen picture from his photo shoot with Megan and Harry for her second pregnancy. Megan and Harry revealed they’re expecting a baby girl during their bombshell interview with Oprah Winfrey.

What wonderful news to celebrate on International Women’s Day! Congratulations my friends, and welcome to the #girldad club H ❤️#internationalwomensday#womenshistorymonth#remoteshoot#shotonipad#shotbymisan#itsagirlpic.twitter.com/OONzZrBBYK

Luminary Bakery in London also shared that the couple sent tasty treats to the women of Hubb Community Kitchen alongside a special note in honor of the holiday.

In Meghan and Harry’s much-talked-about sit-down with Oprah, the expectant mother said that she felt silenced by the royal family and wasn’t allowed to use her voice.

“That’s the sad irony of the last four years. I’ve advocated for so long for women to use their voice, and then, I was silent,” she said on Oprah With Meghan and Harry: A CBS Primetime Special.

Oprah then asked, “Were you silent, or were you silenced?” to which Meghan replied, “The latter.”

“It was only once we were married and everything started to really worsen that I came to understand that not only was I not being protected, but that they were willing to lie to protect other members of the family,” Meghan expressed. “But they weren’t willing to tell the truth to protect me and my husband.”

For more on the sit-down, see below.