Daphne du Maurier did not write her haunting 1938 novel Rebecca expecting it to be adapted for the screen — but it wasn’t long, as she put it herself, before film people were ‘sniffing around’.

The sniffing has never really stopped. Alfred Hitchcock’s celebrated movie was released within two years of the book’s publication and du Maurier, who hated what Hitchcock did with her earlier novel Jamaica Inn, was delighted with it.

So were the Academy Award voters, who anointed it Best Picture.

So in a way it’s surprising how many screen versions have followed down the decades, given the long shadow cast by the 1940 film.

But then it’s a great gothic tale, and that stroke of literary genius — allowing a dead character to loom so large in what, for all its creepiness, is really not a ghost story — is plainly irresistible to film-makers. 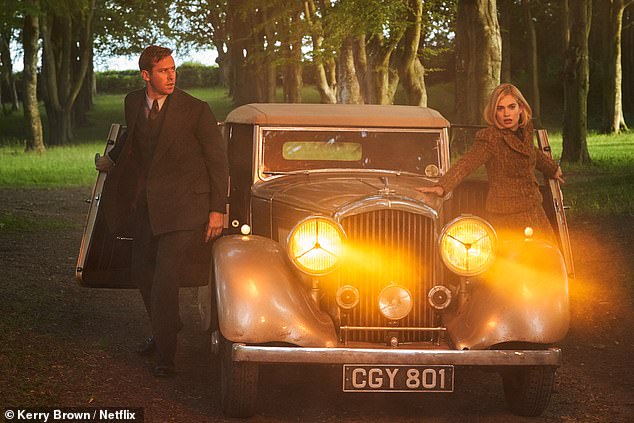 It succeeds, as all good Rebecca adaptations should, in reminding us of its great British literary lineage (above, Armie Hammer as Maxim de Winter and Lily James as Mrs de Winter)

On TV I remember seeing both Anna Massey and Diana Rigg playing Mrs Danvers, the forbidding housekeeper mordantly obsessed with her late mistress, and now, in Ben Wheatley’s new film, it is the turn of an actress of similar class and heft, Kristin Scott Thomas.

Armie Hammer is jolly good as rich, dashing, screwed-up Maxim de Winter, looking in his finery very much to the manor born (as indeed he is, being the great-grandson of oil tycoon Armand Hammer).

And Lily James — who has also just starred in her own private remake of Roman Holiday, if you’ve been reading the news pages — plays the diffident second Mrs de Winter (otherwise unnamed, another du Maurier masterstroke).

She is a pretty but mousey lady’s companion swept off her feet in between-the-wars Monte Carlo and then back to Manderley, Max’s fabulous Cornish estate, where she is both intimidated and eclipsed by the enduring influence of Rebecca, his beautiful, charismatic first wife, who died in mysterious circumstances a year before.

I sat down to watch wondering whether James, Hammer and Scott Thomas would themselves be eclipsed by their Oscar-nominated counterparts in the original film: Joan Fontaine, Laurence Olivier and Judith Anderson.

But actually, this is a stylish and generally irreproachable telling of the story, cleaving closer to the novel than Hitchcock’s version did.

It succeeds, as all good Rebecca adaptations should, in reminding us of the great British literary lineage to which the story belongs. The kinship with Charlotte Bronte’s Jane Eyre is unmistakable.

There is another Jane more directly involved. Entertainingly, Jane Goldman’s screenplay makes the most of the early Cote d’Azur setting, enabling Ann Dowd to ham it up gloriously as ghastly Mrs Van Hopper, the Lily James character’s snobbish employer.

James, by contrast, dials her performance down rather than up, as a young woman whose sudden material security breeds nothing but emotional insecurity. She does a fine job.

Should you watch on a television screen, you might find it hard not to think of her more assertive Lady Rose in the similar-period Downton Abbey, dealing with another stern but rather less complicated housekeeper in Mrs Hughes.

For the same reason, it is a challenge to look at those stirring Cornish cliffscapes and not expect Ross Poldark, frowning dishily, to thunder into view on a stallion.

Come to think of it, in that limited but I think significant on-screen band of lower-class women unexpectedly made chatelaines of households along the Cornish coast, Ross’s wife Demelza could have shown the second Mrs de Winter a thing or two. 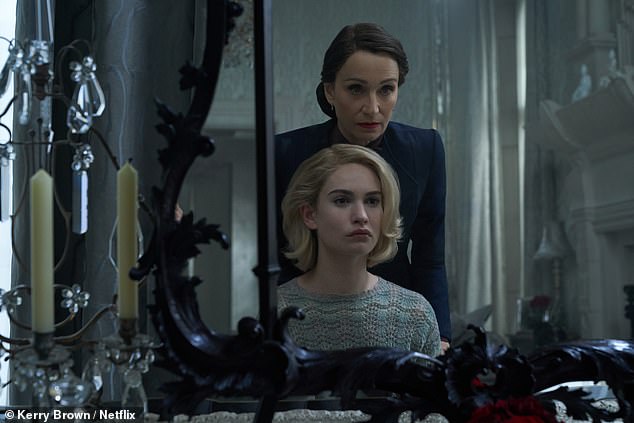 Still, this Rebecca needs to be judged on its own, not in the glow of other productions, nor really by comparison with Wheatley’s own back catalogue, which includes the riotous 2012 comedy-horror Sightseers. This is untypical, his most conventional film yet.

In a way, that is disappointing. It could certainly be more daring, less forgettable. But there is plenty to admire, not least a top-quality supporting cast including Keeley Hawes, Sam Riley and in a cameo as a batty granny, yet another Jane — Lapotaire.

Above all, I liked the way Scott Thomas makes Manderley’s housekeeper more human than we are used to seeing her. She is far from sympathetic but, beneath the icy demeanour, not so much boilingly psychotic as a psychological mess.

It’s a distinctly modern interpretation, yet it does nothing to diminish the character’s stature as one of the screen’s great scene-stealers.

That is what Mrs Danvers has been for 80 years, and I’m happy to say that the wonderful Scott Thomas upholds the tradition.

Rebecca opens in cinemas today and is available on Netflix from October 21.

The clever people at Pixar, whose ingenuity Chaplin would surely have cherished, must have had this line in mind when they created the brilliant pre-titles sequence in Soul, which has been showing as part of the London Film Festival.

Joe Gardner, a middle-aged, African-American middle-school music teacher, voiced by Jamie Foxx, has been invited to play with a celebrated jazz quartet. He is cock-a-hoop.

So he goes skipping deliriously through the busy streets of New York, barely noticing a series of perilous near-misses. It’s his lucky day. Except it’s not.

That open manhole does for him, and the next thing we know, his soul is ascending on a long conveyor belt to ‘The Great Beyond’.

That’s the cue for the film to become a kind of cinematic acid trip as assorted nebulous figures, rendered in surreal outline as if plucked from paintings by Miro, vie for control of Joe’s soul, which is represented as a sort of vaporous blob.

Pixar’s Soul becomes a kind of cinematic acid trip as assorted nebulous figures vie for control of Joe’s soul (pictured with 22), which is represented as a sort of vaporous blob

When blobby Joe escapes from the conveyor belt, he winds up in ‘The Great Before’, where unborn souls are prepared for deployment on earth.

There, he is assigned to mentor the rebellious number 22 (Tina Fey), who was too much of a handful for those previously asked to guide her, including Mother Teresa, Muhammad Ali and even the psychoanalyst Carl Jung.

All this is tricky enough for grown-ups to follow. Children won’t have an earthly what’s going on, so bear that in mind when it comes to Disney + on Christmas Day.

Happily for everyone, the acid trip abates when Joe and 22 find their way to New York, aided by another ethereal character, voiced (splendidly) by Graham Norton.

There, Joe’s corporeal form is languishing on a life-support machine. His soul has only to re-enter his body and, bingo, he can still make his gig. Unfortunately, there is a mix-up. It’s 22 who re-animates Joe, while Joe’s soul enters a cat.

In many ways, all this is an adult sequel to 2015’s Inside Out, which was also directed by Pete Docter. Mostly, it’s about one man’s midlife crisis.

It swings between joyfully mesmerising and bizarrely baffling, and I couldn’t help wondering whether the trippy episodes last as long as they do because the animation is not as complex. Like everyone else during this pandemic, Pixar have had to readjust.

In Walt Disney’s day it was an animators’ strike that forced him to cut corners, still conspicuous today when you watch Dumbo (1941). Maybe the coronavirus similarly influenced the making of this film.

It has certainly influenced the release plans. Disappointingly, Disney has chosen not to give it a theatrical outing — one more cruel thrust deep into cinema’s soul.