LeVar Burton and Ben Vereen are looking back at the time they spent with their late co-star, Cicely Tyson. ET’s Nischelle Turner spoke with the two actors individually about their experiences with the icon, who died on Thursday at the age of 96.

One of Tyson’s most memorable roles was portraying Binta, Kunta Kinte’s mother, on the groundbreaking 1977 miniseries, Roots. Burton played the young Kunte Kinte in the critically acclaimed series based on Alex Haley’s 1976 novel, Roots: The Saga of an American Family, and recalled learning from both Tyson and the late Maya Angelou, who played his grandmother.

“There has not been a day in my life where Cicely Tyson has not been a towering figure of inspiration, and so we are all in uncharted territory in a world without Cicely,” Burton tells ET. “I am not the actor that I am without her presence in my life. I am not the professional that I am.”

As an up-and-coming performer, Burton said he was eager to “win the approval” of his co-stars during the shoot. One memorable moment with Tyson, he remembers, is when he tried to impress her and Angelou by killing a bug for them.

“We were in this hut all morning and during a break in the filming, we were standing in there for shade and a bug had crawled into the tent,” he recalls. “And I thought, ‘Here’s my chance, I want to protect the women, right?’ And so I killed the bug, I squashed it with my foot. And Cicely dug into me like she was my mom and said, ‘Don’t you ever think that because you are larger than a thing or more powerful than a thing that you had the right to take his life.’ And that was a real mother lesson.”

“That is how it was, mother and son. Whenever we greeted one another, ‘mother, son,’ it was like that.” 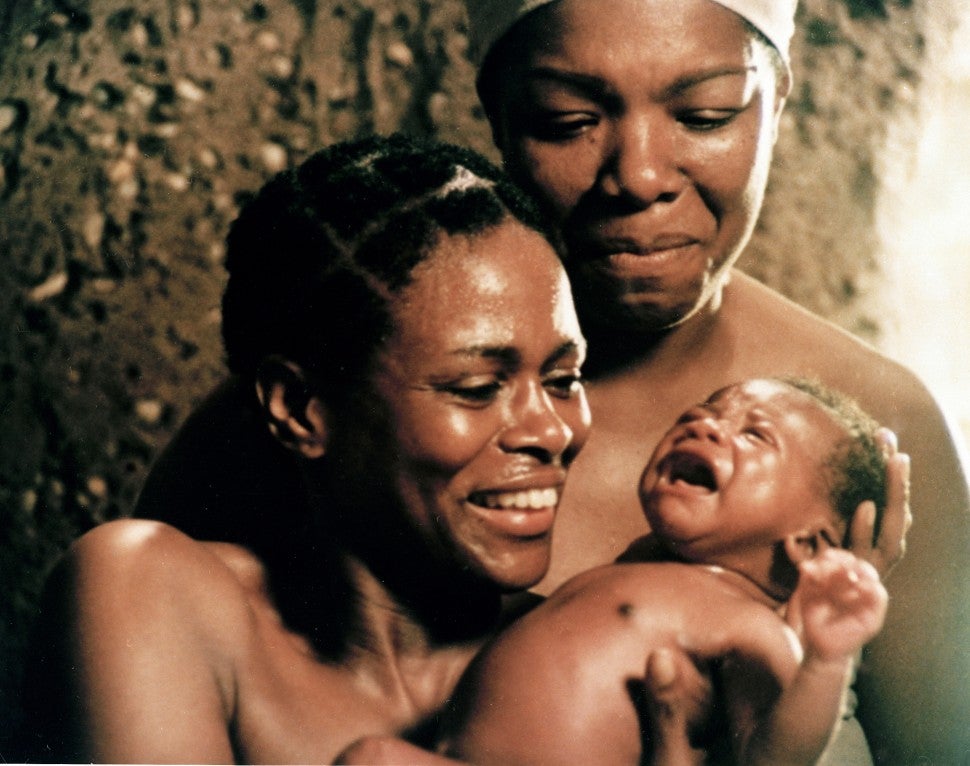 Burton also spoke about the significance of Tyson teaching her experience and wisdom to younger actors.

“We’re at a time in the lives of my generation where we are losing all of these greats, and my generation is a bridge from them to the next generation,” he notes. “It is days like today that the passing of giants like Cicely really bring home the importance of passing it on.”

He also reflected on her extraordinary achievements. Tyson was an icon of television, film and Broadway, having won Emmy, Tony and Screen Actors Guild awards. She was also a recipient of an honorary Oscar, and the Presidential Medal of Freedom awarded to her by Barack Obama in 2016.

“For Black people, especially, there was no finer or more prominent example in what it means to live an authentic life than Cicely Tyson,” he notes. “She did it her way on her terms, she knew exactly who she was and dared you to disagree with her assessment. She was — I know it’s been used before — but she was a force of nature.”

As for Vereen, who played “Chicken” George Moore on Roots, he admitted he had a crush on Tyson but he never told her. The two also worked together on 2006’s Idlewild.

“I’d stand back and be like, ‘Yes, Cicely, yes. Whatever you want,'” he remembers. “She’s beautiful … the way she carried herself. Just elegance … you know, the elegance and the class that she brought to the surface of this planet, she just oozed it.”

Career-wise, she also taught him a valuable lesson.

“What I got from her is be careful about the roles you take,” he shares. “You have an image to hold up, you know, and I will treasure that.”

Vereen said Tyson’s legacy will be her “elegance, grace and beauty.”

“Intellectual, just amazing,” he says of his late co-star. “It’ll be her legacy, that’s what I want her to be remembered by.”

ET spoke to Gayle King on Friday — who interviewed Tyson just last week for CBS This Morning — and she also talked about Tyson being extremely selective of the roles she took.

“You know, I talked to her years ago and got to hear her stories of how she doesn’t take a role unless it speaks to her, and she feels a tingling in her skin and she can inherit the character and the roles that she wanted to play to portray Black women and show the humanity of the Black race,” she recalled. “She said these weren’t just acting jobs to her, she saw these as using her platform. She was extraordinary.”

Watch the video below for more.