Bill Withers dead: Lean On Me, Lovely Day and Ain’t No Sunshine singer passes away at 81 from heart complications

Bill Withers, who wrote and sang a string of soulful songs in the 1970s that have stood the test of time – including Lean On Me, Lovely Day and Ain’t No Sunshine – has died from heart complications his family said in a statement. He was 81.

The three-time Grammy Award winner, who withdrew from making music in the mid-1980s, died on Monday in Los Angeles, the statement said.

His death comes as the public has drawn inspiration from his music during the coronavirus pandemic, with health care workers, choirs, artists and more posting their own renditions on Lean On Me to help get through the difficult times.

‘We are devastated by the loss of our beloved, devoted husband and father. A solitary man with a heart driven to connect to the world at large, with his poetry and music, he spoke honestly to people and connected them to each other,’ the family statement read. 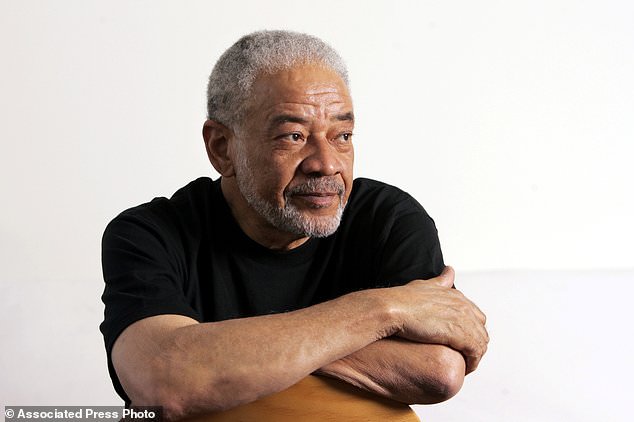 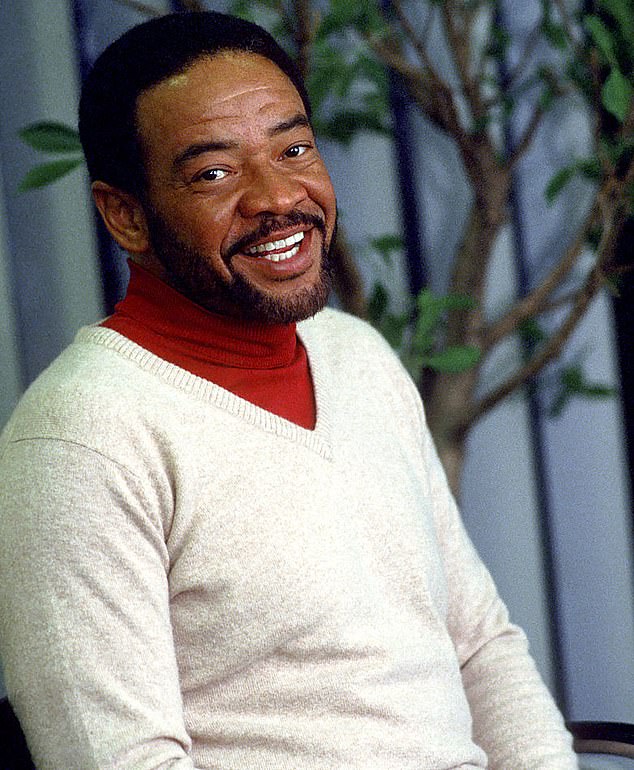 A hitmaker: Withers wrote and sang a string of soulful songs in the 1970s that have stood the test of time, including Lean On Me, Lovely Day and Ain’t No Sunshine

‘As private a life as he lived close to intimate family and friends, his music forever belongs to the world. In this difficult time, we pray his music offers comfort and entertainment as fans hold tight to loved ones.’

Withers’ songs during his brief career have become the soundtracks of countless engagements, weddings and backyard parties. They have powerful melodies and perfect grooves melded with a smooth voice that conveys honesty and complex emotions without vocal acrobatics.

Lean On Me, a paean to friendship, was performed at the inaugurations of both Barack Obama and Bill Clinton. Ain´t No Sunshine and Lean on Me are among Rolling Stone’s list of the 500 Greatest Songs of All Time. 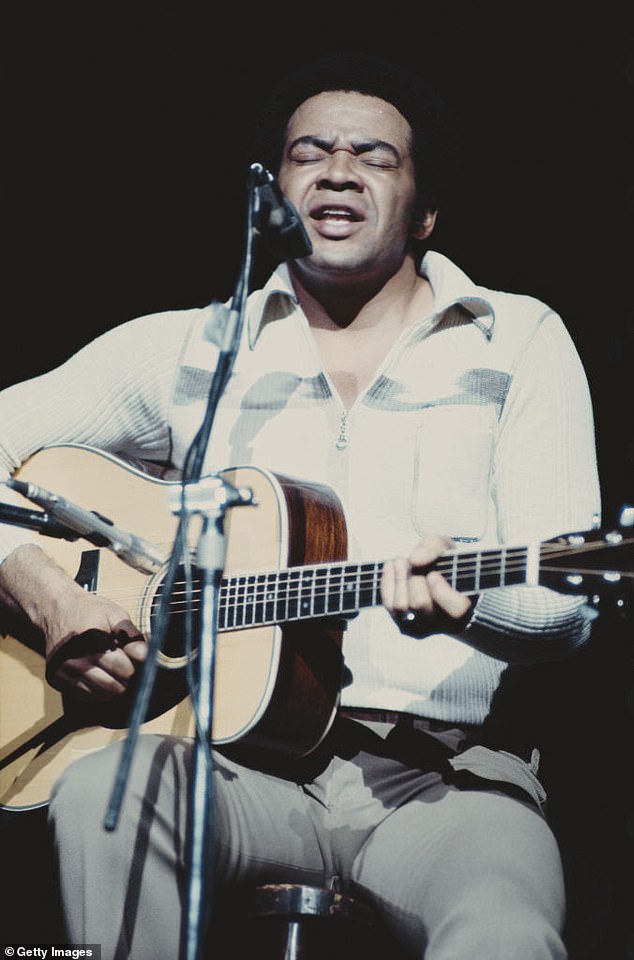 A favorite: Withers’ songs during his brief career have become the soundtracks of countless engagements, weddings and backyard parties. They have powerful melodies and perfect grooves melded with a smooth voice that conveys honesty and complex emotions without vocal acrobatics. Seen in 1972 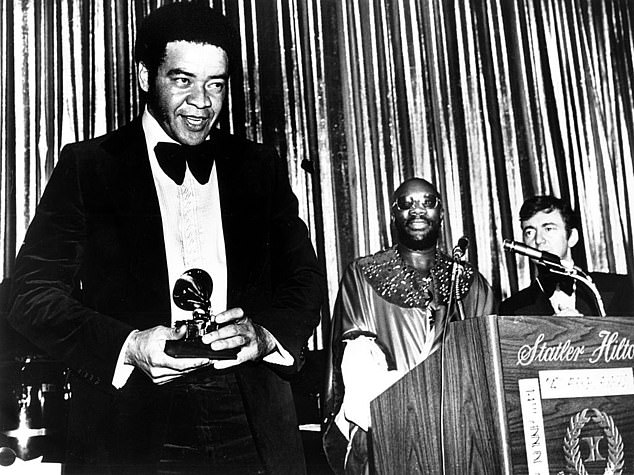 Awards came: Withers gets presented a Grammy for Best Rhythm & Blues Song for his hit Ain’t No Sunshine by singers Isaac Hayes and Bobby Darin at the 14th Annual Grammy Awards at the Statler Hilton in 1972

Withers, who overcame a childhood stutter, was born the last of six children in the coal mining town of Slab Fork, West Virginia. After his parents divorced when he was three, Withers was raised by his mother’s family in nearby Beckley.

He joined the Navy at 17 and spent nine years in the service as an aircraft mechanic installing toilets. After his discharge, he moved to Los Angeles, worked at an aircraft parts factory, bought a guitar at a pawn shop and recorded demos of his tunes in hopes of landing a recording contract.

In 1971, signed to Sussex Records, he put out his first album, Just As I Am, with the legendary Booker T. Jones at the helm. It had the hits Grandma’s Hands and Ain´t No Sunshine, which was inspired by the Jack Lemmon film Days Of Wine And Roses.

He was photographed on the cover, smiling and holding his lunch pail. 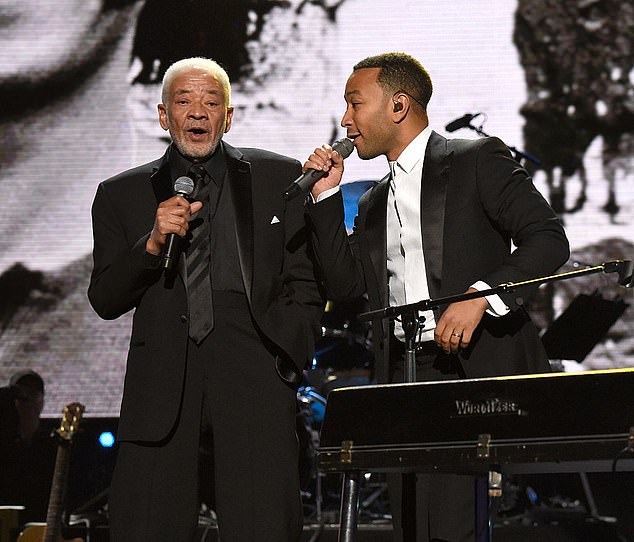 With a pal: Here the iconic singer is seen with John Legend as tghey perform onstage during the 30th Annual Rock And Roll Hall Of Fame Induction Ceremony at Public Hall in 2015 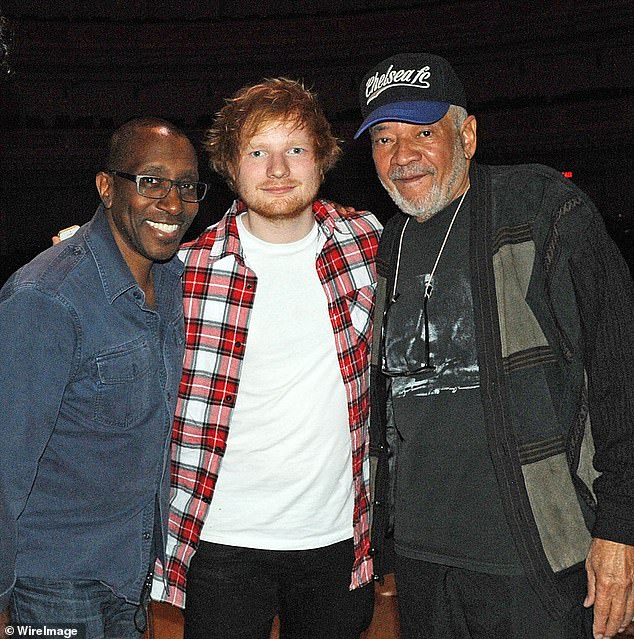 The younger generation looked up to him: Bill with Greg Phillinganes, left, and Ed Sheeran, middle in 2015 in NYC

Ain’t No Sunshine was originally released as the B-side of his debut single, Harlem. But radio DJs flipped the disc and the song climbed to No. 3 on the Billboard charts and spent a total of 16 weeks in the top 40.

Withers went on to generate more hits a year later with the inspirational Lean On Me, the menacing Who Is He (and What Is He to You)’and the slinky Use Me on his second album, Still Bill.

Later would come the striking Lovely Day, co-written with Skip Scarborough and featuring Withers holding the word ‘day’ for almost 19 seconds, and Just The Two Of Us, co-written with Ralph MacDonald and William Salter. His Live At Carnegie Hall in 1973 made Rolling Stone’s 50 Greatest Live Albums of All Time.

‘The hardest thing in songwriting is to be simple and yet profound. And Bill seemed to understand, intrinsically and instinctively, how to do that,’ Sting said in Still Bill, a 2010 documentary of Withers. 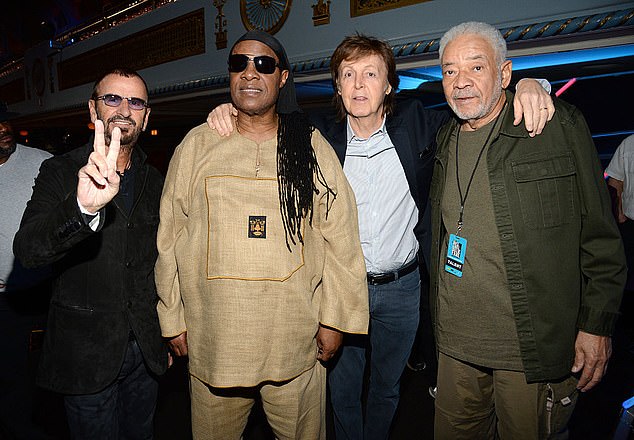 With other icons: From left, Ringo Starr, Stevie Wonder, Paul McCartney and Bill Withers in 2015 in Ohio

But Withers’ career when Sussex Records went bankrupt and he was scooped up by Columbia Records. He no longer had complete control over his music and chaffed when it was suggested he do an Elvis cover. His new executives found Withers difficult.

None of his Columbia albums reached the Top 40 except for 1977’s Menagerie, which produced Lovely Day. (His hit duet with Grover Washington Jr. Just the Two of Us was on Washington’s label). Withers’ last album was 1985’s ‘Watching You Watching Me.

Though his songs often dealt with relationships, Withers also wrote ones with social commentary, including Better Off Dead about an alcoholic’s suicide, and I Can´t Write Left-Handed, about an injured Vietnam War veteran.

He was awarded Grammys as a songwriter for Ain´t No Sunshine in 1971 and for Just The Two Of Us in 1981. In 1987, Bill received his ninth Grammy nomination and third Grammy as a songwriter for the re-recording of the 1972 hit Lean On Me by Club Nouveau. 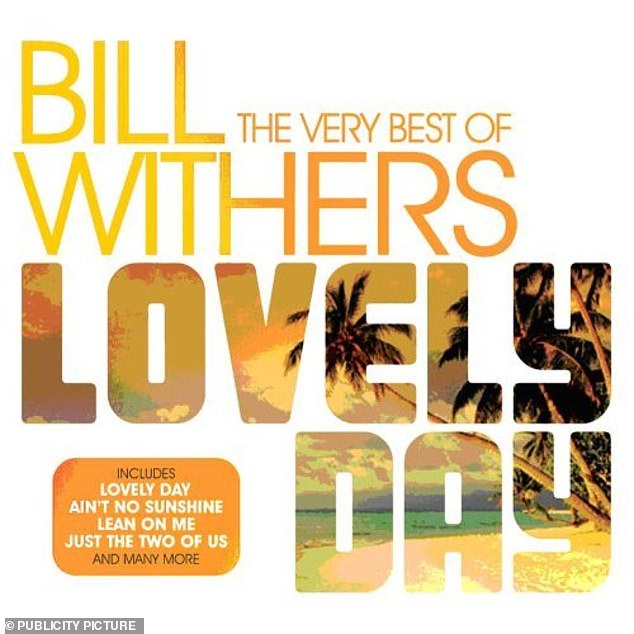 HITS! He was awarded Grammys as a songwriter for ‘Ain´t No Sunshine’ in 1971 and for ‘Just The Two Of Us’ in 1981. In 1987, Bill received his ninth Grammy nomination and third Grammy as a songwriter for the re-recording of the 1972 hit ‘ Lean On Me’ by Club Nouveau

He was inducted into the Rock and Roll Hall of Fame in 2015 by Stevie Wonder. Withers thanked his wife as well as the R&B pioneers who helped his career like Ray Jackson, Al Bell and Booker T. Jones. He also got in a few jabs at the record industry, saying A&R stood for ‘antagonistic and redundant.’

His music has been sampled and covered by such artists as BlackStreet´s ‘No Diggity, Will Smith’s version of Just The Two Of Us, Black Eyed Peas’ Bridging The Gap and Twista’s Sunshine. The song Lean on Me was the title theme of a 1989 movie starring Morgan Freeman.

His songs are often used on the big screen, including The Hangover, 28 Days, American Beauty, Jerry Maguire, Crooklyn, Flight, Beauty Shop, The Secret Life of Pets and Flight.

‘I’m not a virtuoso, but I was able to write songs that people could identify with. I don’t think I’ve done bad for a guy from Slab Fork, West Virginia,’ Withers told Rolling Stone in 2015.

He is survived by his wife, Marcia, and children, Todd and Kori.