Location, Location, Location presenter Kirstie Allsopp, 49, has taken to social media to air her views on the subject of the country’s national flag. Taking to Twitter, the TV presenter asked her 423,900 followers about their opinions on the symbol, but attempted to clarify her stance on the matter by declaring that she wasn’t making a “political statement” and simply found the topic “fascinating”. The TV host’s comments came after the topic was discussed on BBC Breakfast yesterday following the use of the British flag in a backdrop of a government interview.

Why are we ashamed of our flag?

She wrote on the platform: “Why are we ashamed of our flag?

“This debate would not be happening in any other country in the world”, Kirstie then added pictures of the national flags of Switzerland, Turkey, Pakistan, New Zealand and Brazil, before continuing, “and on & on all fly the flag with pride.

“Those who think just the [Americans] fly the flag don’t get out enough.”

Kirstie’s tweet has so far gained over 1,000 likes from fans. 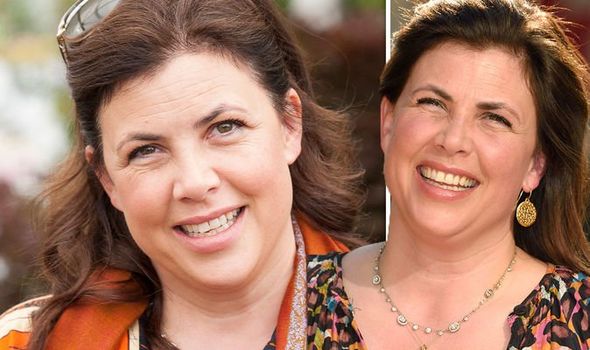 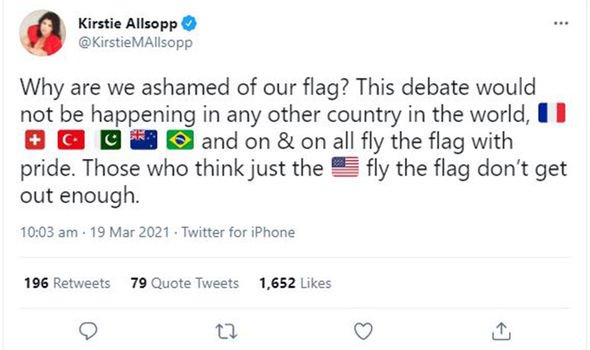 Responding to a follower who disagreed with her reasoning, Kirstie responded with her own experiences of flying a flag.

She continued: “I think the point is that we are ashamed of it, I don’t have a single friend who flies a flag, yet I have friends across the globe who fly their flags really proudly.

“We are a bit odd about our flag.”

Despite the TV personality airing her opinion of British people being “ashamed” of the national flag, Kirstie went on to tweet that she “had no views” on the subject. 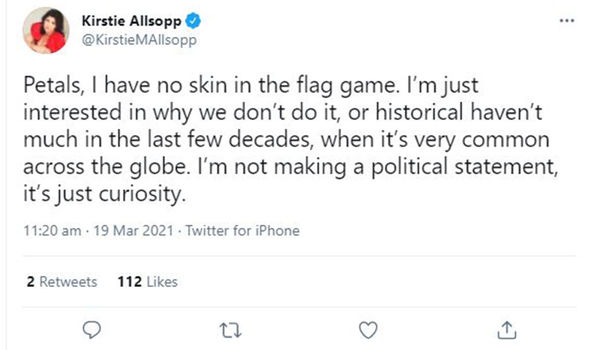 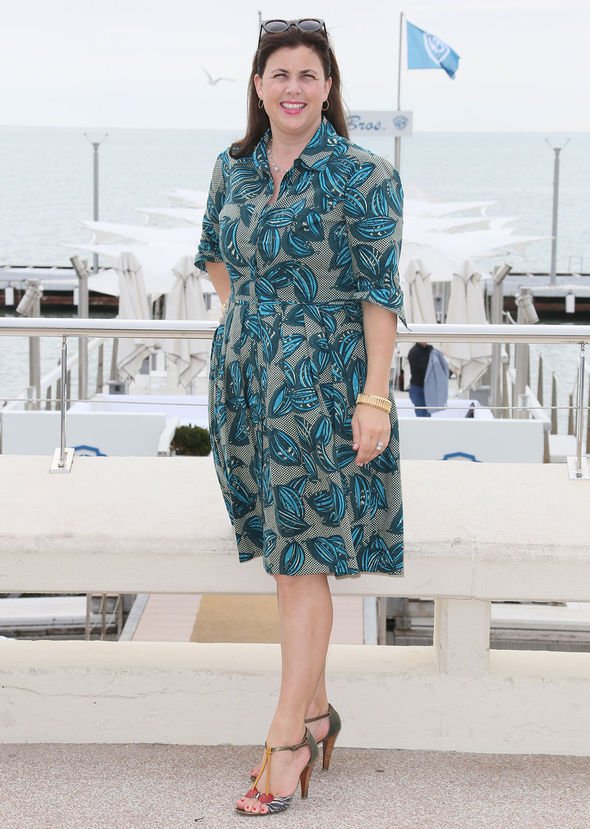 She said: “I have no views on it either way.

“I’m just interested that my British friends don’t fly the flag and yet friends further afield do.”

Fans of the Channel 4 star were quick to weigh in on the comments below.

One wrote: “Individuals flying the flag has never been the done thing in the UK.

“I want to stay British and do not want to become more Americanised.”

Another added: “Personally the last time I flew my very large Union Jack was at the 2012 Olympics.

“There was nothing political about it, just a way of showing support for the amazing UK athletes making history.”

As Kirstie’s discussion started to gain momentum, she quickly clarified that she wasn’t making a “political statement”.

She said: “Petals, I have no skin in the flag game.

“I’m just interested in why we don’t do it, or historically haven’t much in the last few decades, when it’s very common across the globe.

A fan agreed, causing Kirstie to reply: “I think the whole topic is fascinating.”