Rapper Kirko Bangz took to Instagram late on Thursday night to reveal the tragic news that his baby son has passed away.

The Houston-born rapper whose real name is Kirk Jerel Randle has been very quiet from the musical point of view this year, but while details are currently scarce, it appears he’s just suffered a terrible tragedy.

Bangz posted a picture of himself and his partner staring adoringly at a little baby boy. He accompanied the picture with a long and touching tribute to his baby boy, where he directly addressed his son.

The Drank In My Cup singer wrote: “Fly high BIG MAN. We love you so much!” He continued with the heartbreaking sentence, ” We had so much planned that we won’t be able to do now, but we know you’re in a better place and in no more pain.”

Bangz then implored the little one to: “Watch over your mom; she needs your strength more than ever right now poppa man.”

The rapper concluded by telling his son that he was grateful that he is no longer in pain. “I know u don’t hurt no more and I try to make myself think of that to find a little bit of light in this. GOD got u poppa I love u.” 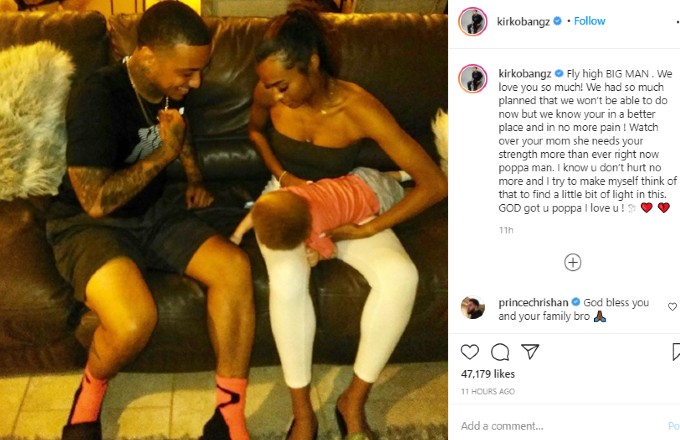 At the time of writing this article, his post had received nearly 50,000 likes, and Bangz had received numerous messages of condolences.

R&B singer Prince Chrishan was among the first to offer his condolences; he wrote: “God bless you and your family bro.”

Rapper Boston George sent Bangz prayers and urged him to hold his head up. He wrote: “Damn bro that’s hard prayers out to you n ur girl man I couldn’t imagine hold ur head up n no god don’t make mistakes.”

Reality star Natalie Nunn messaged to say she was “praying for your family from my family.” And musician Brian Angel continued with the message of keeping faith by writing, “Prayers to you and the fam brother.”

Kirko Bangz always keeps his private life out of the limelight, and it remains unclear what age his baby boy was and why he has lost his life. He has been less prolific than usual with his music this year, which might be explained by difficult family issues.

May the little one rest in peace.

In August, Chicago based rapper FBG Duck, real-name Carlton Weekly, was shot dead in a drive-by shooting while shopping in an affluent area of the city. Two cars appeared alongside the rapper, and gunmen opened fire from both vehicles killing the rapper and wounding two other individuals.