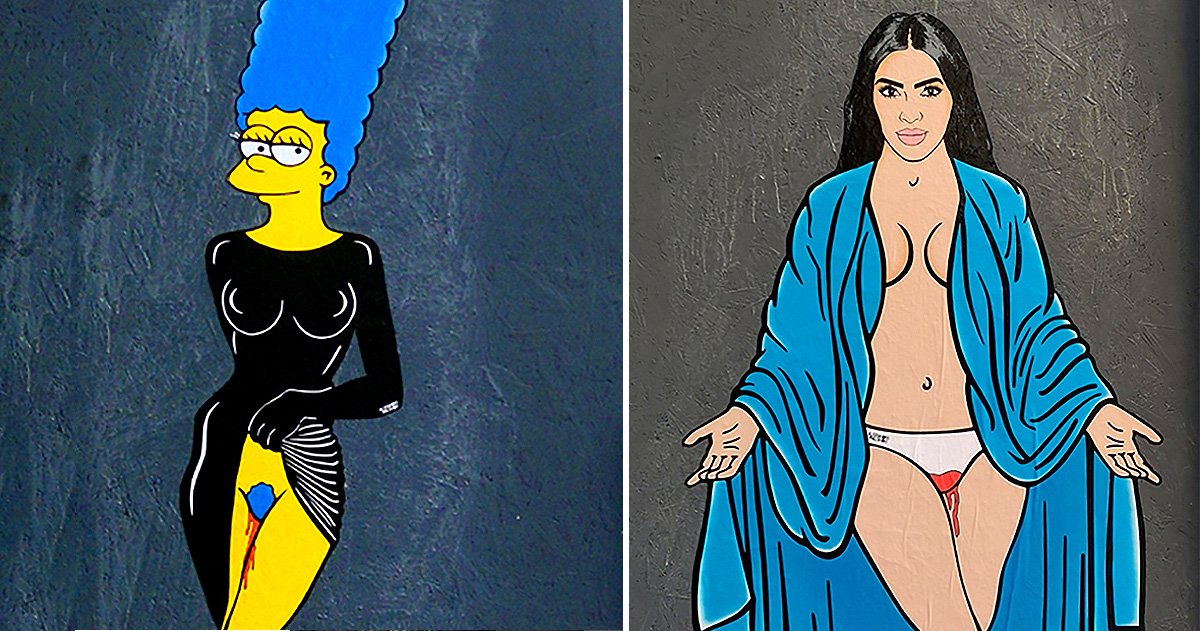 Kim Kardashian and Marge Simpson are the stars of a new campaign for the destigmatisation of menstruation – in graffiti form, that is.

Artwork from Italian pop culture artist AleXsandro Palombo has popped up on the streets of Milan ahead of the International Day of Menstrual Hygiene on May 28, showing illustrations of Kim and Marge both bleeding through their underwear and free bleeding.

The image of Kim depicts her wearing an open blue robe and holding her hands out like a religious figure, with her white underwear exposed.

Blood is painted onto her underwear to depict her period.

The Marge Simpson work is much racier, and is based on an infamous picture of Stephanie Seymour taken by Richard Avedon.

In the illustration, Marge lifts up her dress to show that she is free bleeding.

Palombo said the series of artwork is to fight against the taboos and stigma of menstruation, as well as the tampon tax and menstrual poverty, and said: ‘To fight social inequalities and gender disparities, we must also go through menstrual equity.’

‘Menstrual hygiene is a human right that must be guaranteed to all women in the world and the “Tampon tax” as well as the “period poverty” are a real gender discrimination deriving from the macho culture that goes against the equality of genders.’

The artist continued: ‘For centuries art has portrayed the blood that flows from all sort of injury, from the sacred to the profane, from the Middle Ages to the Renaissance and up to the 1900s. Art has been steeped in blood and violence, but I have never seen anyone get so disgusted with these visions as with menstruation. It’s time to celebrate the flowing blood without wounds, the miracle of menstruation.’

The higher tax rate had been set for luxury items like cigarettes and alcohol, leading to campaigners arguing that sanitary products should be in the tax bracket for necessary products.

In the UK, the tampon tax of 5%, which treated sanitary products as non-essential, was scrapped from January 1 this year, joining countries including Ireland, Australia, the United States, India, Canada, Nigeria, Jamaica and Kenya.

However, a Plan International UK poll on 1,000 girls and women between the aged of 14 and 21 undertaken last year estimated that almost a third of them had struggled to access or afford sanitary products during lockdown.

Additionally, 47% of girls and women in 160 countries experienced more difficulties in getting period products during the pandemic.

Palombo is known for his reimagining of The Simpsons characters and Disney princesses, using them in artworks championing causes and campaigning against domestic violence.

Back in 2015, he caused controversy by giving stars like Kim Kardashian, Kendall Jenner, Emma Watson and Miley Cyrus black eyes, split lips and bruises in his Break The Silence to show the realities of domestic abuse.

At the time, it was reported that while Kim and Kendall backed the cause, they were not happy with their images being used without their permission, although Palombo said he did not hear from their lawyers.

This month, his series Just Because I Am A Woman – which depicts female politicians including Angela Merkel and Hillary Clinton as victims of domestic violence – was chosen for display at the Musée des Arts Décoratifs in Paris.