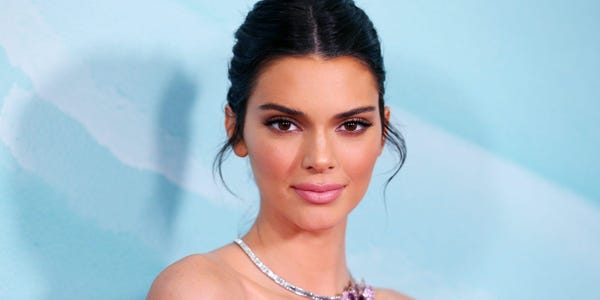 Kendall Jenner recently shared a childhood photo of herself and pointed out her noticeably uneven bangs, saying that they were her mom's doing.

The model and "Keeping Up With the Kardashians" star posted the photo on her Instagram story on Saturday, which shows her, alongside her sister, Kylie, dressed in matching plaid dresses and red-glitter shoes — just like Dorothy from "The Wizard of Oz" — alongside their parents, Kris and Caitlyn Jenner.

"Why were my bangs like this mom???" Kendall Jenner wrote in her caption.

Jenner is pictured with noticeably uneven bangs — her hair is longer on the sides and cut short in the middle.

"Oh man, Kendall tried to cut her own bangs lol" one user commented on the picture, which was originally posted by a fan account on Instagram, @velvetcoke.

It's unclear whether or not Kris Jenner was really responsible for Kendall's childhood bangs in the picture. That being said, the supermodel is known for experimenting with her hair.

The star showed off "baby bangs," or bangs that are cut extremely short, at the Christian Dior Masquerade Ball during Paris Fashion Week in 2017.

The style was a nod to Audrey Hepburn's iconic short bangs.

In February 2019, Jenner posted a photo of herself with long, wispy bangs on Instagram.

She captioned the photo "Yes, no, maybe so?"

More recently, the reality star appeared to dye her hair blonde and shared a photo of her new look on her Instagram story in May. The star has since reverted to her usual darker, brunette hue.

Though the Kardashian-Jenner sisters post plenty of photos of themselves on social media, it's rare that they share throwback family pictures. When they do share old pictures, however, fans are typically quick to comment on how much they look alike, or how they resemble their own children.

For example, in early January, Kim Kardashian shared a childhood photo of herself, Khloe, and Kourtney that she captioned "triplets."

Some commenters pointed out that the young picture of Kim looks just like her oldest daughter with Kanye West, North.