While Kate Middleton visited Scotland, the Duchess of Cambridge attended an event wearing a vibrant blue outfit that was close to the same one Princess Diana wore nearly thirty years earlier.

Kate Middleton was “rhapsody in blue” when she and Prince William visited Turning Point, a social care charity, in Scotland on Monday, May 24. The Duchess of Cambridge wore a double-breasted blazer from Zara and paired it with a new pleated skirt from UK-based brand Hope Fashion (according to Us Weekly.) The look was near identical to one that William’s mother, Princess Diana, wore when visiting The Queen’s Medical Center in Nottingham, England, in 1992. Diana wore a similarly blue double-breasted blazer and pleated skirt. 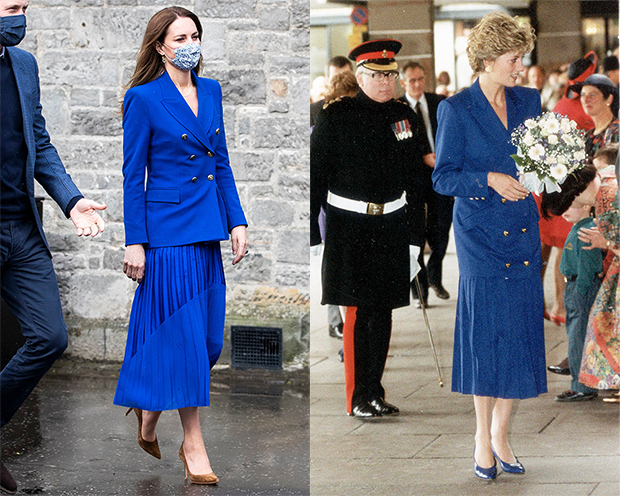 The only significant difference between the outfits was the shoe choice. Diana wore pumps that matched her blue outfit. Kate, 39, opted for a Gianvito Rossi suede pump. She also opted for a Spells of Love Double Strand Beaded Chain Necklace, a pair of citrine earrings, and an Amaia Kids blue floral print face mask. The color scheme was also seemingly intentional, with blue and white making up the colors of Scotland’s national flag. 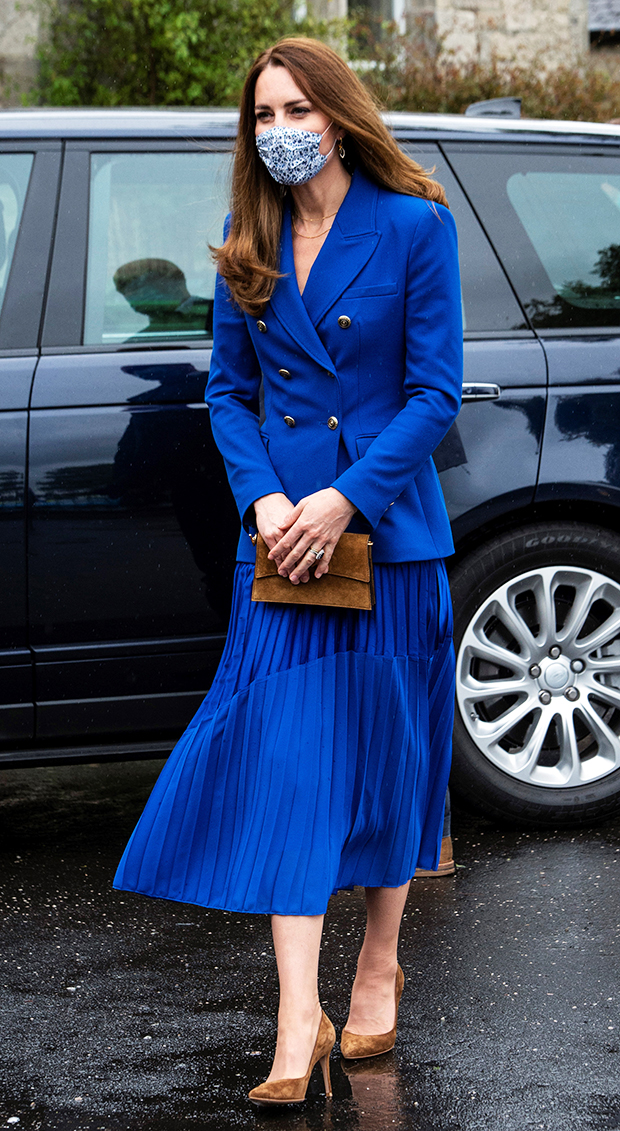 This is far from the first time that Kate has taken fashion inspiration from her late mother-in-law. In October 2020, while holding her first audience at Buckingham Palace since the pandemic lockdown,  Kate wore a pair of sapphire earrings and a necklace bearing the same gemstone. Royal family watchers took this accessory choice as a subtle nod to Diana. Sapphires were a favorite of the late Princess of Wales – her engagement ring was a Sapphire, and she often wore the jewels to major events.

Similarly, Kate’s sister-in-law, Meghan Markle, has also used Diana as a fashion template. While attending the Royal Ascot one year, Meghan wore a white and black outfit (with chic fascinator) that echoed a similar look to Diana’s. When attending the royal wedding of Prince Harry’s cousin Celia McCorquodale in 2018, Meghan wore a blue and white Oscar de la Renta dress similar to the floral print that Princess Dianda donned when visiting Saudi Arabia in 1986. It was just one of the two-dozed times that Meghan and Kate honored Diana with their wardrobes – and we can now add this Scotland visit to that growing list.