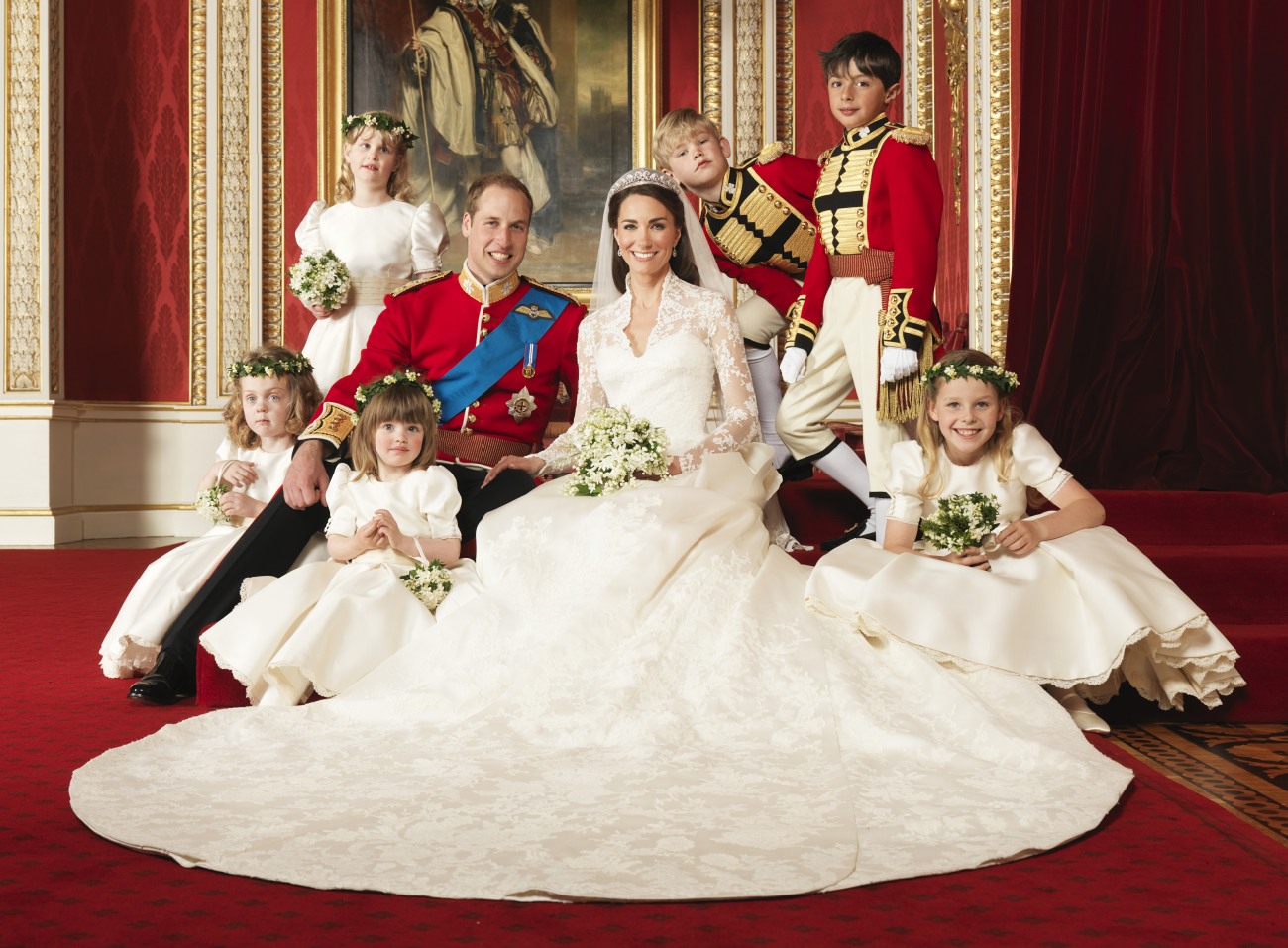 April 29th, 2011 – the Duke and Duchess of Cambridge’s wedding date. They celebrate their ninth anniversary this week. I know there are many people who theorize that this marriage will not last, but… I do not agree. I think the marriage will last as long as William wants it to last. Kate has shown that she’ll never leave him. Even if Kate has secretly been drowning in unhappiness – which I don’t think she is – she still won’t leave him. Her identity is too tied up in being William’s wife and, frankly, she’s always had her eye on the prize of being the Queen Consort. Future Queen style.

Anyway, I do like to go back and look at William and Kate’s wedding photos because every year I look back, I feel a different way about their wedding and Kate’s gown and their vibe. This year, I’m feeling weirdly generous. This year, Kate doesn’t look as orange in these photos. This year, her wedding gown looks really classic and yet of-the-moment. I also didn’t give Kate enough credit for choosing a design which “walked” well and photographed in a very “clean” way.

A reminder: Kate commissioned Sarah Burton at Alexander McQueen to design this gown. The Middletons’ paid for the gown, which was “unusual” at the time – usually the royal family picked up the costs of a royal wedding entirely, but the Middletons picked up the $434,000 tab for the gown. When the Queen wanted to exhibit the gown at Buckingham Palace, Kate allowed the palace to “borrow” it for the exhibit, and Kate ended up getting a cut of the profit from ticket sales.

Burton sewed a blue ribbon in the gown as Kate’s “something blue,” but I would argue that the sapphire engagement ring was “something blue” as well. Kate’s something new was the pair of diamond acorn-and-oak-leaf drop earrings her parents gave her for the day. Her something borrowed was the Cartier Halo tiara, which the Queen let her borrow. Kate did her own makeup for the day, but a professional hair stylist did do her hair that morning. Kate reportedly worried that she would cry on the ride to Westminster Abbey beside her father. Kate also planned it out so she would arrive at the Abbey in a car – like a “commoner” – and leave by a gilded carriage as a princess.

Oh, and their wedding cake was fruitcake! I’m still mad about that. Following the Westminster Abbey wedding, William and Kate went to Buckingham Palace for more photos, a balcony wave & kiss, and a lunch hosted by the Queen. After that, William and Kate changed into their party looks at Clarence House (Charles’ home) and attended a party there, and then went back to party at Buckingham Palace. Kate’s second wedding look was also Burton-for-McQueen. I’m including some photos of that second look, plus a shot of Kate’s wedding gown at the Palace exhibition after the wedding. The Queen reportedly hated the macabre “ghost bride” look of the exhibition. 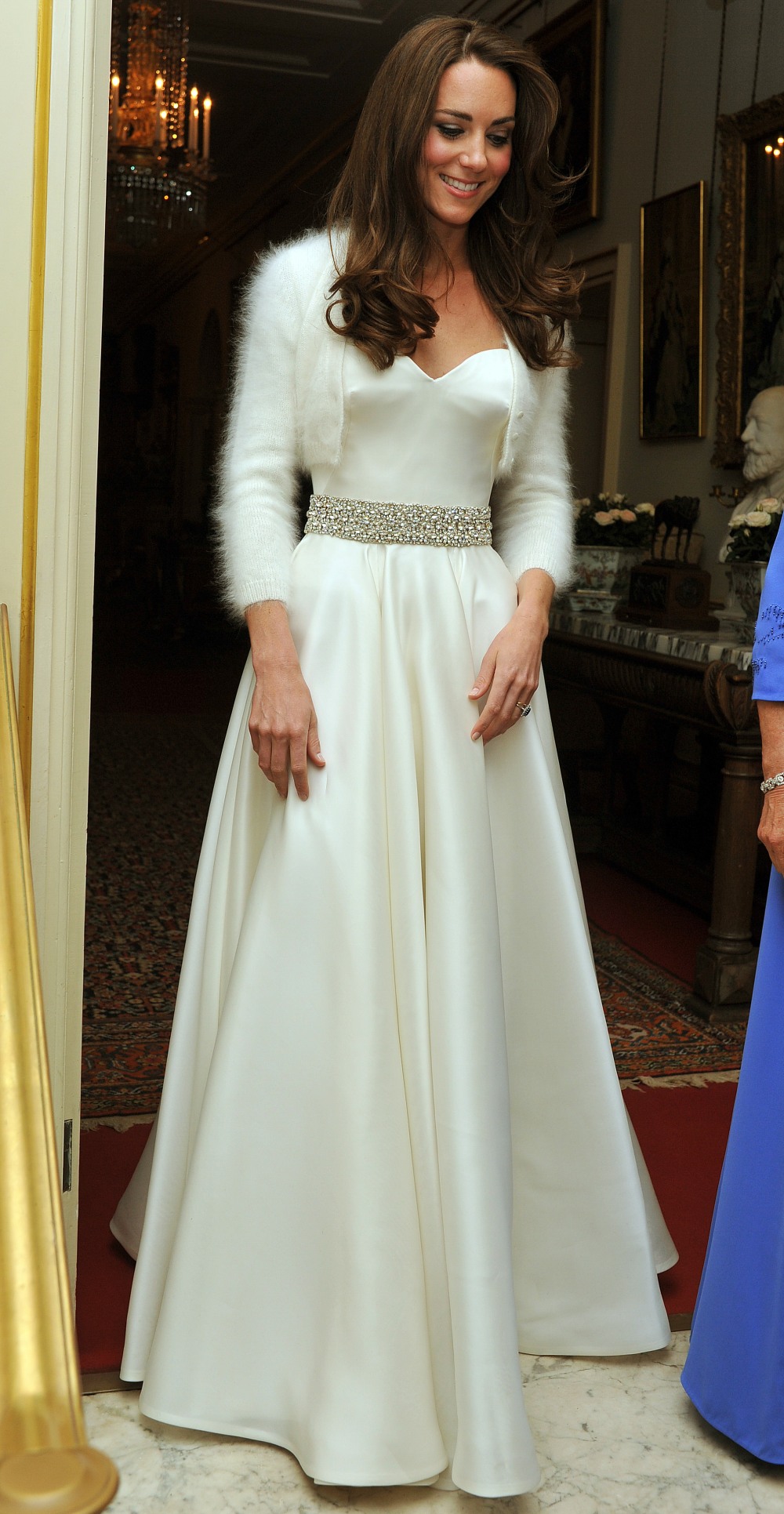 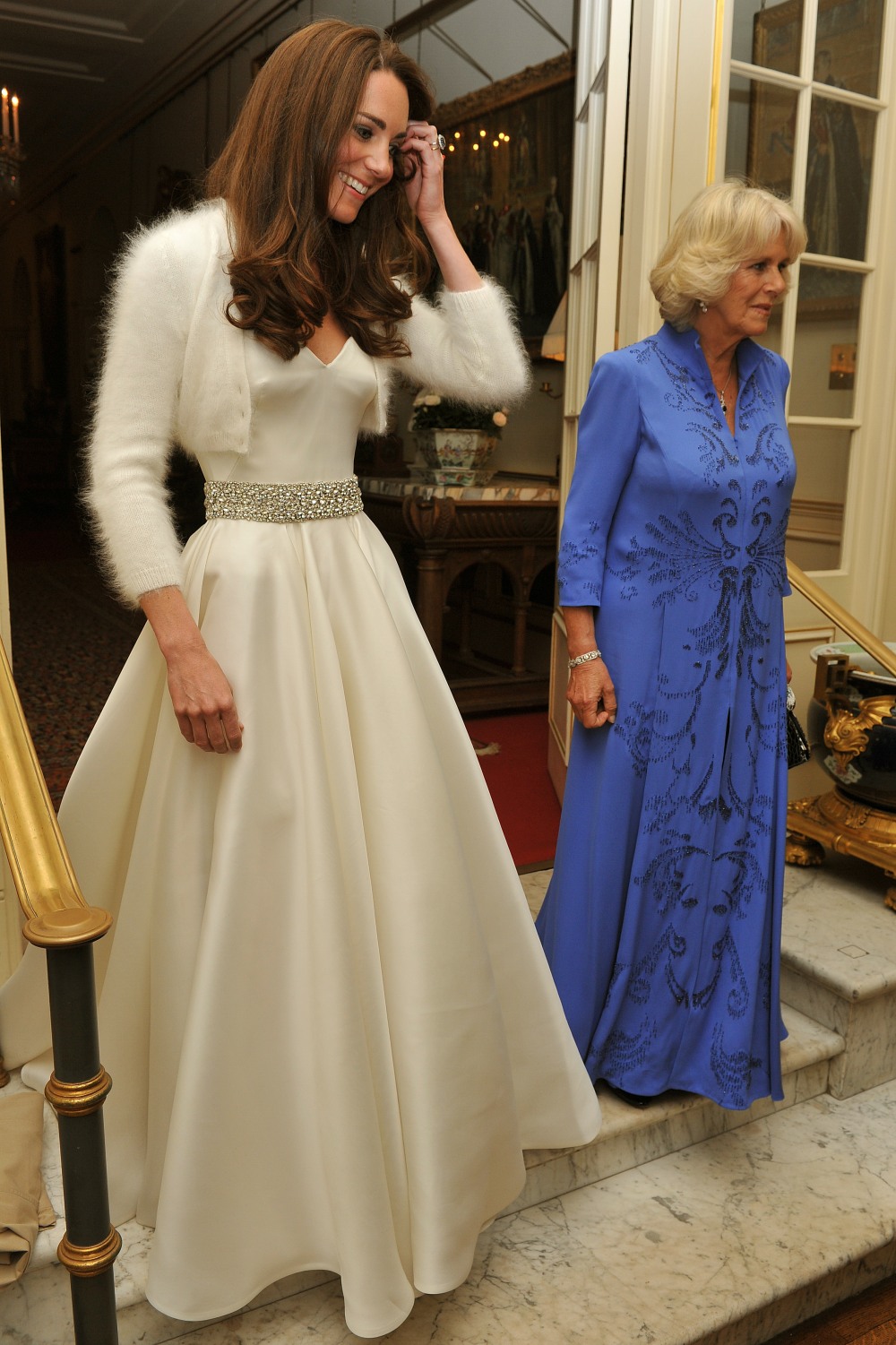 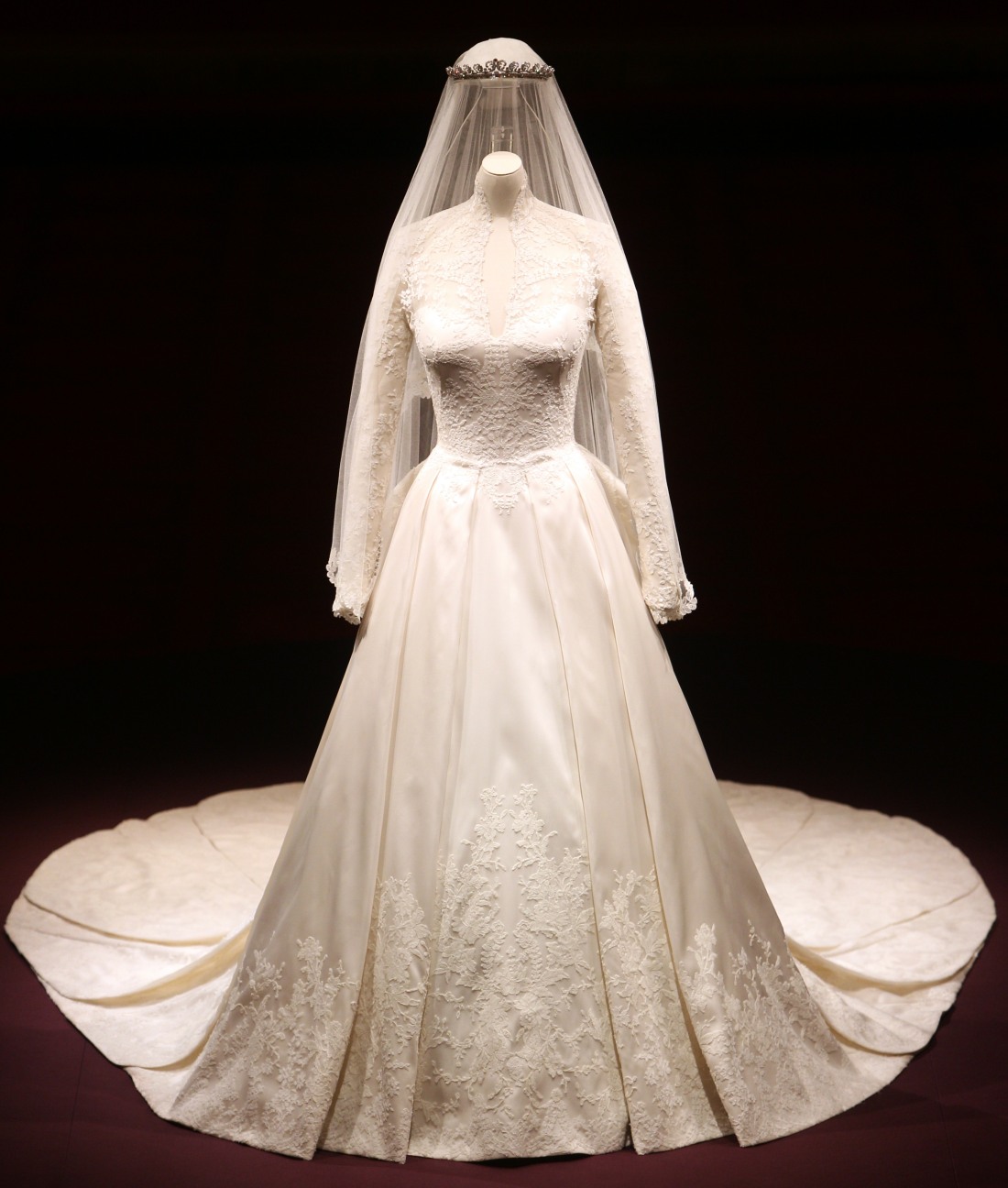 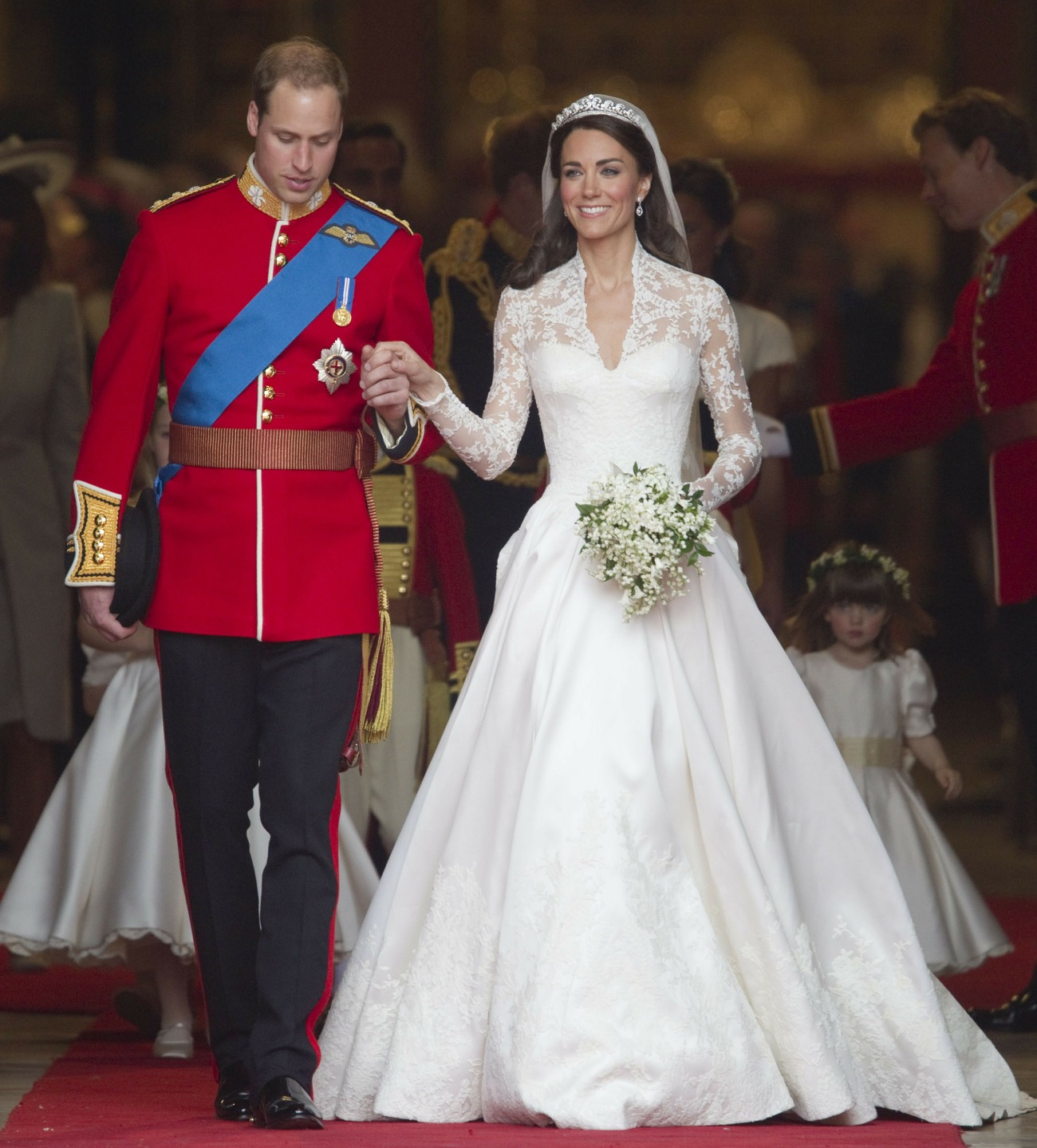 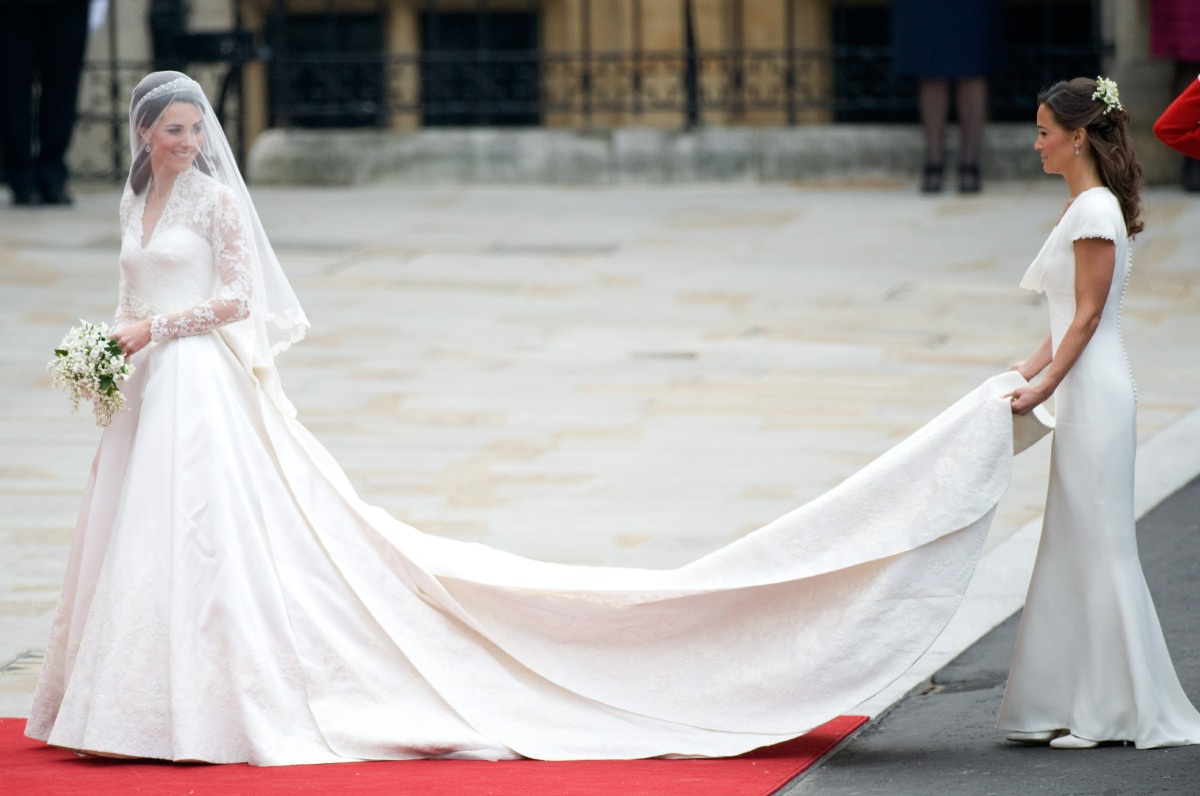