When it comes to the Braxton sisters, fans know Towanda Braxton as “the responsible one.” The title is fitting. Not only does she exude the role of the middle sister who is historically known for being the glue, but she works hard to maintain open and honest communication with her sisters despite how difficult it can be in a world full of opinionated and strong women. 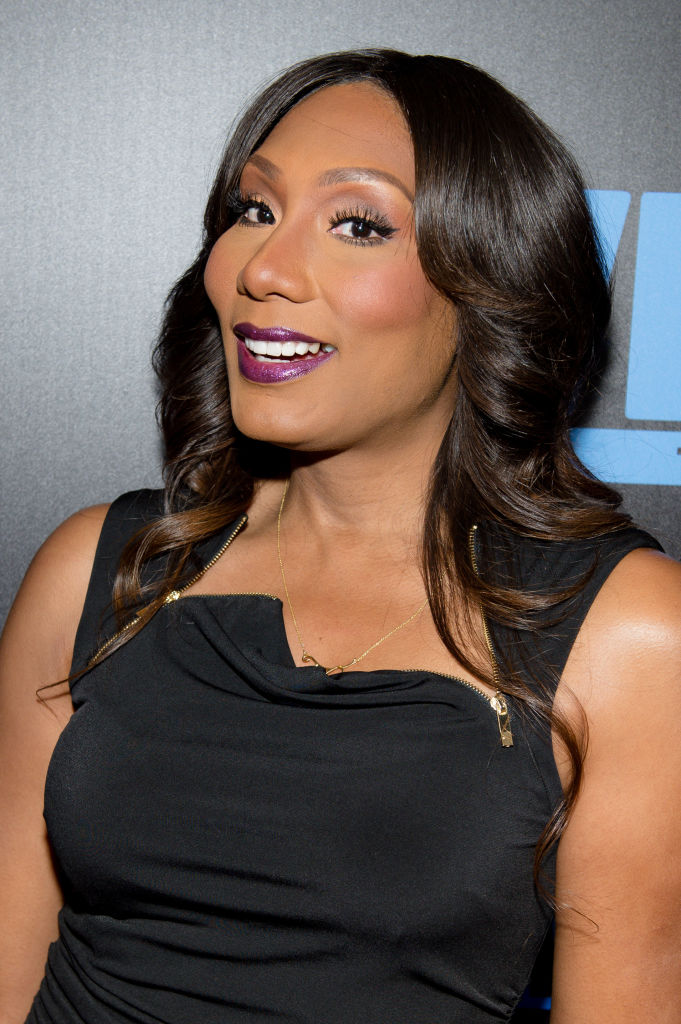 Nowadays, Towanda is taking more responsibility for herself and putting her needs and wishes at the center. Despite enjoying working with her talented family, she’s working to make her personal dreams a reality.

Towanda has followed her own path of acting, straying away from her musical family to dedicate her time to her first love. She’s also established several businesses on her own, which revolves around beauty. 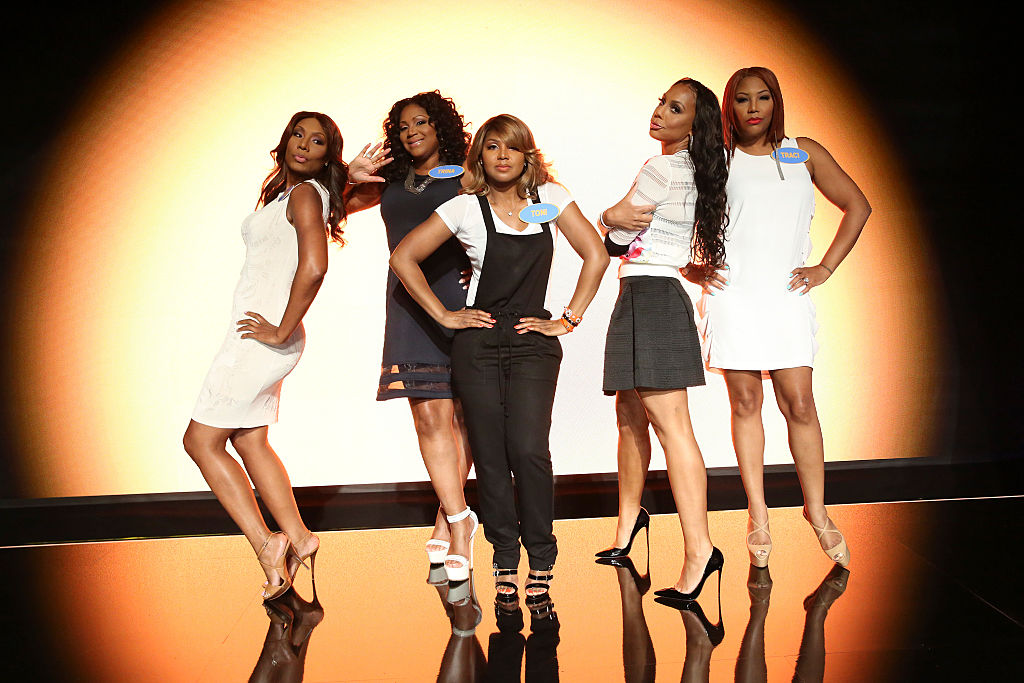 Showbiz spoke to Towanda about her individual branding with acting and establishing herself as an entrepreneur with her skin care line and other businesses. She also gives fans a heads up on what to expect with her crazy family on the upcoming season of Braxton Family Values.

Towanda is following her passions outside of music and one of which has been skin care with her new line, LadyBug Skin Care

The Braxtons are known for their musical magic and though Towanda has a beautiful voice, singing is not her ultimate goal. She’s made it a point to branch off from her musical roots to explore other avenues. Known for her glowing natural skin, she’s taken what she’s learned about preserving her youthful looks with a new skin care line, LadyBug Skin Care.

“I’ve always been into skin care and because I don’t drink a lot of water, I’ve had to rely on the assistance of skincare products to help keep my skin intact,” she said. “I also have skin envy and one day I was admiring actress Meagan Good’s skin and was inspired to come up with my own products to achieve a similar look.”

Towanda partnered with Charlotte Wilson, known as the “Skin God.” Together created a line of seven products focused on anti-aging and glowing skin. The product infuses natural ingredients, with one of the key contributors being turmeric which helps with evening skin tone.

For best results, we encourage using four products day and night. In the morning, use the morning and night bar to wash the face, followed by the morning toner, morning cream and then the sunscreen to protect your skin throughout the day. In the evening, rewash the skin with the bar, apply the cream to assist with dark circles, then the serum and end with the night lotion.

Ladybugs have always been Towanda’s favorite insect, she even has a tattoo of a ladybug. But it’s become even more special since she and Hall started dating almost five years ago. He refers to his lovely lady as his ladybug and she calls him her king.

Together, they have branded the term “King LadyBug” with a joint Instagram and YouTube page but Towanda says LadyBug Skin Care is solely her business. However, she is not opposed to taking on creative projects with Hall.

“The skin care line is mine but it would be beautiful to expand the King LadyBug brand,” she said. “Right now, I am focused on my businesses and my children since my divorce and that’s been my main priority. But I enjoy our social media presence together and showcasing our relationship.”

Braxton Family Values viewers watched the demise of Towanda and Andre’s relationship from the start of season 1. The two were living together but legally separated and sleeping in separate rooms while they co-parented their two children. Towanda says she masked a lot of the ugly details of their marriage for the sake of their children.

“What made it difficult was that I was in a protective mode of not making him seem bad or telling the full truth of what really occurred in the marriage with him bc I didn’t want my children to think negatively of their father,” she said.

Now that the divorce is final, Towanda has been adopting a more open and honest policy with her children as they’ve aged and can better comprehend things. Still, she hinted that not all is well between her and her ex-husband and promises viewers will see it all play out on the upcoming season of Braxton Family Values.

Luckily, Towanda is able to thrive in her new healthy and happy relationship with Hall, who takes an active parenting role in her children’s lives.

The trajectory of the show from season one to now is vastly different. Viewers were initially introduced to the five sisters singing and enjoying time with one another. As the seasons progressed, their arguments became more brutal and frequent. Fans of the show became fed up with the constant fighting but Towanda believes it’s all a part of the process.

“Looking back and watching how the situations grew into something else, we realized that we had to create boundaries and a lot of the sisters were resistant,” she explains of the arguing. “We are going through the growing pains now to get to a better place and with prayer and everything we will get there one day at a time.”

Towanda revealed that the unexpected death of their 24-year-old niece Lauren “Lolo” Braxton was an eye-opener for the family.

All these gals in this photo are such amazing women, one post will never be able to explain it all. I love them more than they can imagine and I would punch you in the eye if you disrespect them! 😝 Happy Mother’s Day to the amazing, talented, beautiful Braxton gals! @evelynbraxton @tonibraxton @therealtracibraxton @trinabraxton1 @tamarbraxton #ladybug #ladybugskincare #sisters #family #mothersday

“Lauren’s death impacted the family immensely and we are still trying to cope. It’s only been a year since her passing,” she said. “We took a break for a year from filming but ultimately decided to continue because we realize we are an example of families who can go through things and get over it.”

The Braxtons debuted as a group in 1989 but embarked on solo careers after Toni’s career took off. In between working on their own projects, the sisters all toured with Toni as background singers at some point. With the response of their long-awaited joint album, Towanda says that more music may happen in the future.

#braxtons We’ve been in this game for a looooooooong time….. #respect #family #bfv #sisters We get in each other’s last nerve however comma, dem my girls and I love them.

Related: ‘Braxton Family Values:’ How Did The Braxtons Do As a Singing Group?

“We have committed to probably doing one or two gospel songs to fulfill what we started as the church is where our roots are,” she revealed.

The sisters have also taken on other business opportunities together outside of music. Prior to the COVID-19 shutdown, they were actively working toward opening a restaurant in D.C. but everything was halted. However, once they are given the green light to continue, they will resume what they started.

Towanda has proven to be quite the triple threat as a singer, dancer, and actress. She feared facing rejection from her family if she opted to stray away from music in order to act but she realized it was necessary for her to follow her passion.

Three years ago on this day August 15, 2016 I was awarded my very own day in Daytona Beach, FL. My king was by my side then and is still standing strong while holding my hand through this journey. Thank you @epimediagroup for making it happen. @itsseank I love you. Thanks for loving and supporting me and my amazing children. @kingladybug always…. #blessed #thankful #towandabraxtonday #love

In the midst of going through marital issues with her ex-husband, she finally got the courage to focus on her acting. She was accepted into the Lee Strasberg acting school and her acting credits have increased.

“I’ve done a movie with my sister Toni and Michael Jai White, as well as a film with David and Tamela Mann. I’ve also appeared in a string of shows and am looking to do more once the shutdown conditions improve,” she explained.

Towanda was also the executive producer of Toni’s Lifetime biopic Unbreak My Heart. While adhering to quarantine guidelines, Towanda has continued taking her acting classes online to stay ready post-shutdown.

Along with her skin care line and acting career, Towanda has been working on several businesses

After retiring as her sister Toni’s personal assistant, Towanda used her experience to start a development and training school for personal and executive assistants called The Secret Squirrel. Many of the graduates have been placed locally in Georgia where the school is based, as well as nationally.

Towanda also has several other business ventures in the works, including a gel nail polish line that will be available for purchase in July that can be used at home and at the salon – as well as a new fitness app, Just Fit.