Danny Trejo is a man of many talents. He’s not just an iconic actor, he’s also a writer, a music mogul with his own record label, Trejo Music, as well as an entrepreneur with a growing empire that includes Trejo’s Donuts, Trejo’s Tacos, Trejo’s Cantina and Trejo’s Cerveza.

The 76-year-old Chicano star has a real rags to riches story, spending time in and out of jail during the 1960’s, going on to become a Hollywood and Latinx icon, to now being sober for over 50 years. This year, Trejo also released his first cookbook, Trejo’s Tacos: Recipes and Stories from L.A.: A Cookbook, which includes 75 recipes, as well as an insight into his life, career and how his mother inspired his culinary ventures.

“How does a man known for playing merciless, shirtless, tattooed, gun-toting, vengeance-thirsty, knife-throwing tough guys become the face of a restaurant group selling award-winning tacos, authentic barbacoa, and kale salad?” Trejo writes in his book. “I say this a lot and Trejo’s Tacos is proof of it: It’s not how you start. It’s how you finish.”

“Even more important than home was Mom, who, no matter whether I was being good or bad, would cook the best food. I loved it. Trejo’s Tacos exists because of that love,” he shares. “Through it all, my mom was always there for me, in the kitchen cooking up carne asada or chilaquiles, no matter what.”

“When I was out partying with my friends, we’d all show up in my mom’s kitchen, sometimes at one, two o’clock in the morning,” he recalls. “First, my mom would bawl me out for being out so late. Then she’d make us something to eat with a big smile on her face, thanking God I was home. That kitchen was always a safe haven, a place where I could stay out of trouble.”

In celebration of Hispanic Heritage Month, Trejo shares the recipes to make his Carne Asada Tacos and Salsa Verde. 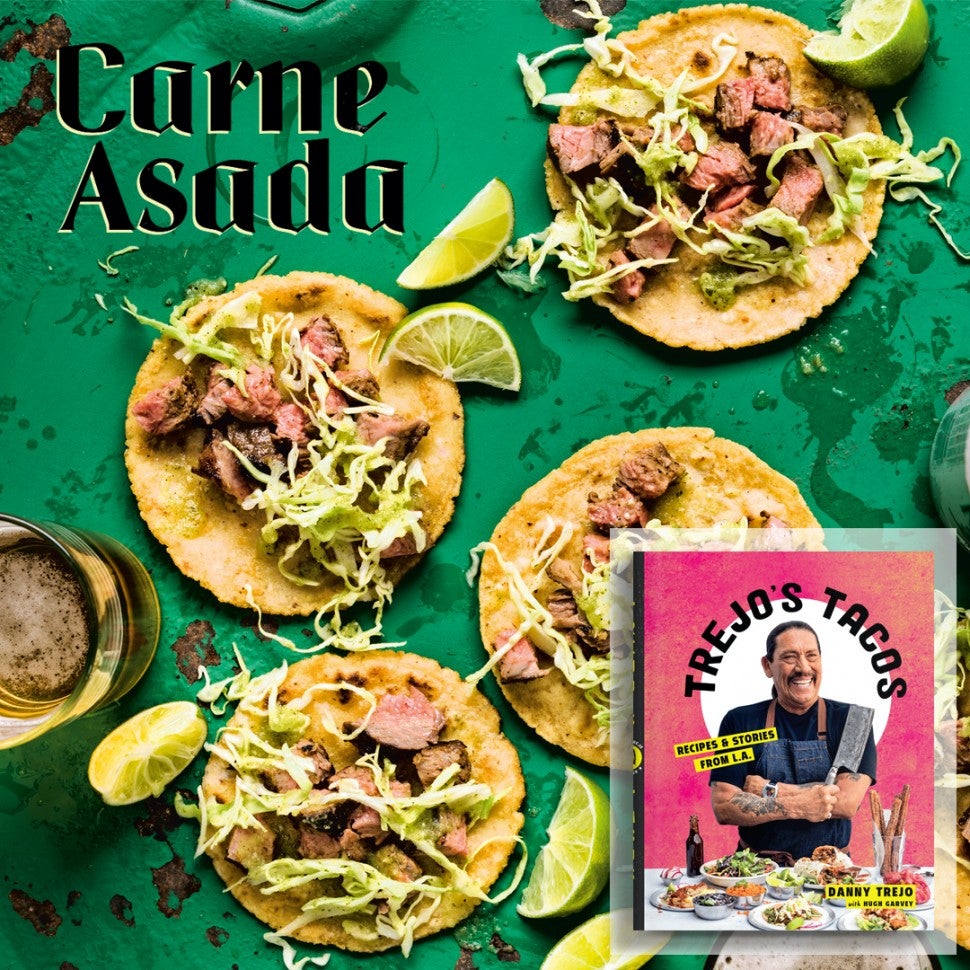 1. Marinate the Steak: Combine the onion, chipotles and sauce, jalapeños, garlic, cilantro, orange juice, olive oil, soy sauce, lemon juice, cumin and paprika in a food processor or blender and puree. Transfer the marinade to a large self-seal plastic bag or airtight container. Add the flank steak and turn to coat it in the marinade, then seal the bag (or cover the container). Refrigerate overnight.

2. Grill the Steak: Remove the steak from the marinade, letting the excess marinade drip back into the bad or bowl. Place the steak on a platter and set it aside at room temperature for 30 minutes. Meanwhile, heat a gas or charcoal grill to medium-high heat. Grill the steak until it is charred, about 5 minutes. Turn it over and grill until charred on the other side, about 5 more minutes. Transfer it to a cutting board and let it rest for 5 minutes before slicing it crosswise and against the grain.

1. Heat a large heavy skillet over medium heat until it is very hot, about 4 minutes

2. Add the whole tomatillos and jalapeños. They should sizzle when they hit the dry hot pan

3. Cool until the vegetable are black and blistered in spots and soft on one side, 5 to 7 minutes

4. Use tongs to turn the tomatillos and jalapeños over

7. Remove the pan from the heat and let the mixture cool to room temperature

8. Transfer the tomatillos, jalapeños and garlic to a blender or food processor and add the onion, cilantro, lime juice and salt

9. Process until the sauce is completely smooth

10. Taste and add more salt or lime juice if desired

11. Transfer the cause to a bowl and chill before serving, or refrigerate in it an airtight container for up to 5 days

We’re so excited to announce the opening of our newest @trejostacos Downtown Los Angeles kitchen! We are now serving all of the East Side 🌮 of Los Angeles via @postmates #downtownla #eastside #postmates

We’re so excited to announce the opening of our newest @trejostacos Downtown Los Angeles kitchen! We are now serving all of the East Side 🌮 of Los Angeles via @postmates #downtownla #eastside #postmates

2. Stack the tortillas, wrap them in aluminum foil, place them in the over, and let them warm until they’re fragrant and pliable, about 15 minutes

3. Remove the tortillas from the oven. Unwrap the stack and line up the tortillas, assembly-line-style, on your work surface

4. In a medium bowl, mix the shredded cabbage with the Salsa Verde

5. Divide the carne asada among the tortillas, placing it in a straight line down the center of each tortilla

6. Place a line of the cabbage mixture to the right of the steak

7.Serve a lime wedge with each taco

This recipe and more can be found in Trejo’s Tacos: Recipes and Stories from L.A.: A Cookbook, available now.