Big Night At The Bingo – Our Lives

As the whole country goes stark raving mad, it’s fitting that we all look like we have escaped from Bedlam. Three months without a haircut will make anyone seem like a loony.

David Tennant and Michael Sheen are sporting magnificent lockdown hair in their witty, wordy playlets, Staged (BBC1). Former Doctor Who Tennant has grown a bob, held in place with grips. If he shaved his beard, he could play Joan of Arc.

Sheen has a mane of grey curls surrounding his head like a halo. He looks like he’s preparing to be Aslan in Narnia. With that roaring voice of his, he’d be good, too.

The pair of them are unrecognisable from their double act in the comic fantasy Good Omens, in which Sheen was a cherubic blond angel and Tennant a swaggering demon with a taste for glam rock.

But the friendship they formed during the filming of that big-budget show seems a genuine one.

The grainy, low-res footage of Staged looks as though it was filmed for loose change. But there’s a spontaneity, an unspoken sense of shared fun in their dialogue as they chat via laptop and video phone apps.

This series of 15-minute segments, written by co-star Simon Evans, has them trying to rehearse a play.

Doing that via Skype or Zoom turns out to be practically impossible, mostly because all the distractions of home are constantly intruding.

Tennant’s children are a non-stop source of ‘noises off’, while Sheen is knocking back red wine at three in the afternoon and stuffing his face with nibbles. 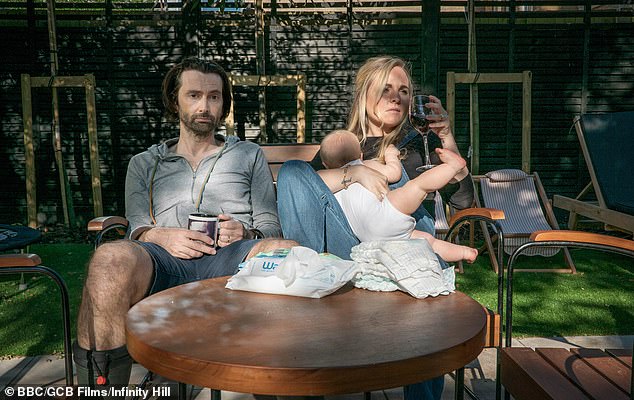 David and Georgia Tennant pictured in the series. It isn’t the first time we’ve seen well-known spouses make an impromptu appearance on shows filmed in Lockdown

There’s a running joke that both of them are living with women much cleverer than they are.

Pretentious job title of the night

It used to be a porter’s job . . . but as service gets worse, titles get longer.

It isn’t the first time we’ve seen well-known spouses make an impromptu appearance on shows filmed in Lockdown: Charlie Brooker’s wife, Konnie Huq of Blue Peter fame, had most of the best lines in his satirical Antiviral Wipe last month, for instance.

But the parts written for Georgia Tennant and Anna Lundberg are much more than ad libs. I snorted with laughter at Georgia’s complaint about the frustration of home-schooling her children: ‘How many f*****g rainbows does a four-year-old need to make?’

Sheen had an airy answer to that: ‘Teach them a craft instead. Get them up a chimney.’

That led into a conversation about whether Sheen could play Fagin in Oliver! (Good lord, how I’d love to see that) and what part Tennant would get. They decided on Nancy.

The sharpness of the script and the skill of the actors makes us feel as if we are eavesdropping on the affectionate bickering of two fed-up friends.

It’s a joy — and all six episodes are already available on iPlayer. Another joy of lockdown is the way it encourages the Beeb to screen local documentaries that wouldn’t usually get an airing outside their own region.

A fortnight ago it was Soul Boy, about the North’s long love affair with Sixties R’n’B. 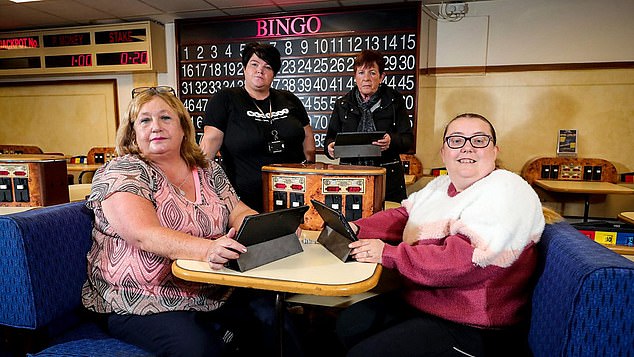 Big Night At The Bingo (BBC1). The likes of Eilish, Kate and Margaret, the type of women who form the backbone of working-class families, are not often seen on TV

Another in the Our Lives strand, Big Night At The Bingo (BBC1), was first shown in Northern Ireland back in January. It took us up the Falls Road in West Belfast, to the Westway for Gala Night, where an entrance ticket for £29 buys you a chance of the £1,000 first prize.

The likes of Eilish, Kate and Margaret, the type of women who form the backbone of working-class families, are not often seen on TV. They’re here to get away from the house for an evening, maybe win enough for a new washing machine, and above all have a chinwag.

‘We’re not on Facebook,’ said one. ‘We’re talking to each other.’