Martha Stewart does not want this profile to mention her age. Not because she doesn’t want it to be known (after all, there’s this thing called Google), but because, she says, a man's age is rarely discussed when they’re the subject of a story. "Why, after every woman's name, is her age?" she asks. "It’s very sexist and very inappropriate." I’m virtually face-to-face with Stewart on Zoom and I agree vehemently. "I don't know how old you are. I don't know how old I am," she continues. "Age means nothing to me."

"So if I see my age anywhere in this article, I will be very upset." There’s half a beat before we move on to the next question, during which I've already begun the mental gymnastics of figuring out how I'll explain this to my editor when — as Stewart is keenly aware — the world is fixated upon her age.

I will just say, then, that Stewart has about a year on President Biden. Not that his age matters, either. "I don't care how old Biden is," she says. "I don't care that he might be the oldest president we've ever had. Guess what? If he can accomplish what he’s promised, then congratulations. It’s not about how old you are, it's about what you're doing."

And Stewart is doing a lot. She has clothing lines on Amazon and QVC (the short-sleeve puffer vest is a must-have seasonal transition piece), a new book (Martha Stewart's Very Good Things, an anthology of more than 500 of her favorite tips for optimizing your home), a show called Martha Knows Best on HGTV, a thriving media empire (like Allure, her magazine celebrates its 30th anniversary this year), and partnerships with too many brands to mention. 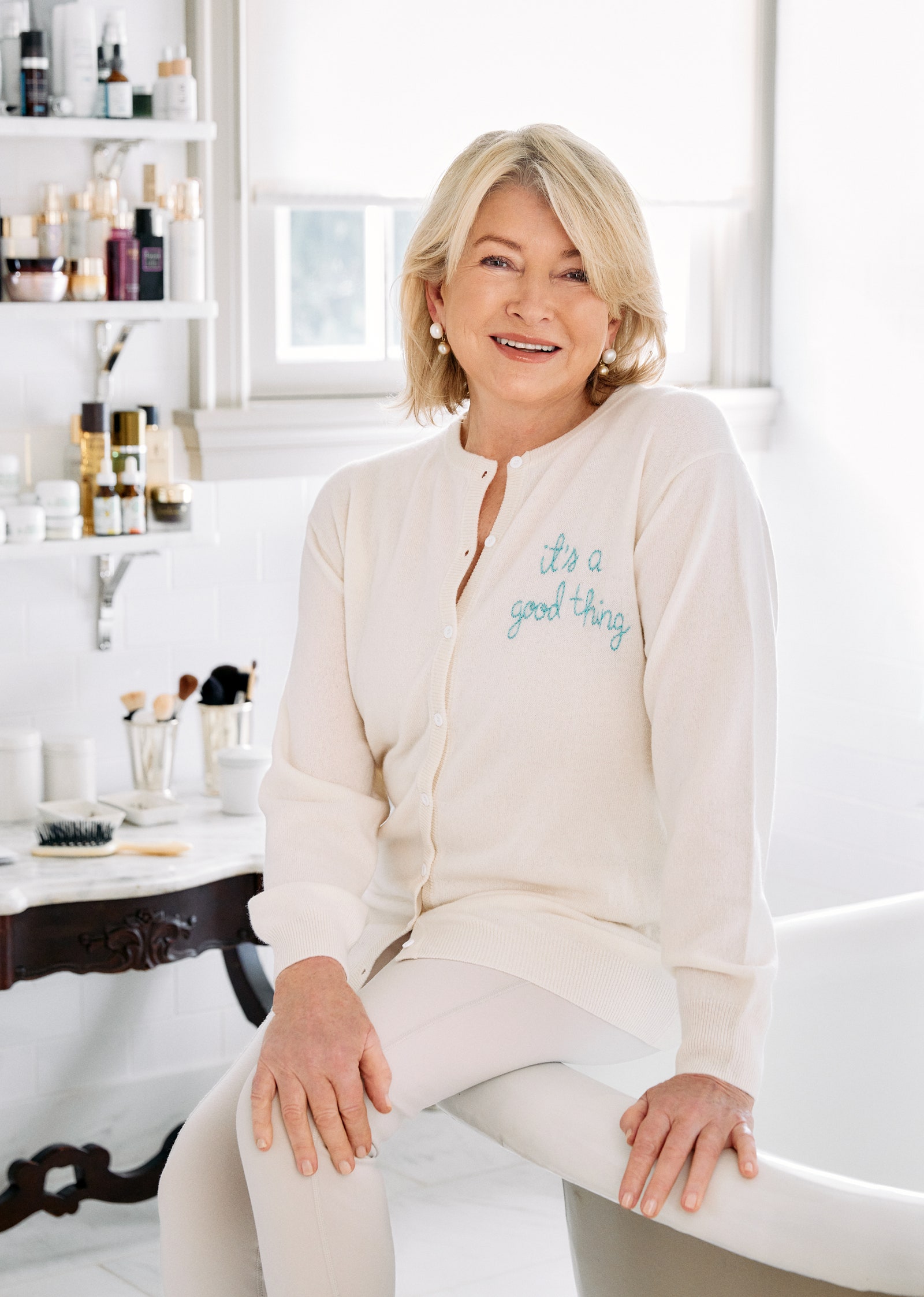 But if you follow Stewart on Instagram (and if you don't, we recommend you go do that), you know her latest passion is CBD — as in cannabidiol, a feel-good (but not psychoactive) compound extracted from the Cannabis sativa plant. In February 2019, Stewart signed a deal with Canopy Growth, the first cannabis-producing company to be listed on the New York Stock Exchange, to produce CBD-based products under her name.

Since then, Stewart has been singing the praises of her CBD-infused oil drops (she takes a few before bed to help her drift off, though she admits she awakens a few hours later because she is "a horrible sleeper") and wellness gummies. Stewart's love for animals, including her dogs Emperor Han and Empress Qin (Chow Chows) and Bête Noire and Crème Brûlée (French bulldogs), inspired her to create a CBD-based range for animals, including chews designed to help calm and improve mobility.

After a press conference (in which Stewart, Emperor Han, and Bête Noire all participated) about the research on CBD that informed the line's creation, the market cap of Canopy went up $1 billion, Stewart tells me, proudly. "Because people are waiting for announcements and developments [regarding CBD]," she says. "I think as more research is done on it, more and more doctors will adapt it to their practices. I've already met three doctors — serious doctors — who are using CBD."

Which brings us to the main topic of today's conversation: skin care. It’s the first time Stewart is divulging details of a new line of topicals infused with — you guessed it — CBD. She is aware she is not the first to bridge the worlds of cannabidiol and skin care: "I had been trying CBD masks and I thought, Well, gee, this is really interesting. It really is making a difference in the elasticity," she says. "If you already have lines, it's not going to take them away, but it certainly diminishes any kind of furrows in your face. And it certainly lubricates and it certainly invigorates." 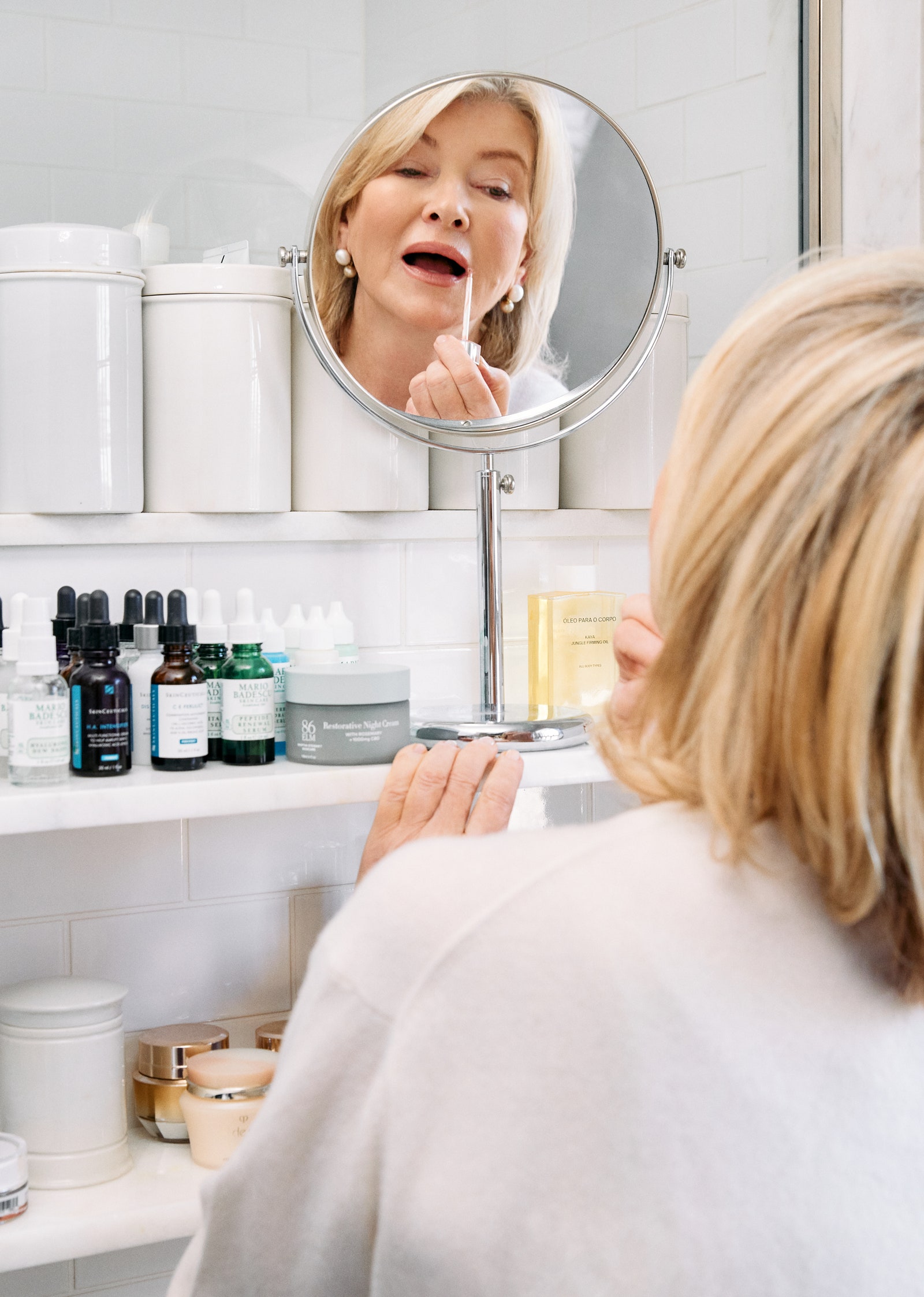 After trying other CBD-infused skin-care products with mixed results (some creams "were useless"), she called upon dermatologist Dhaval G. Bhanusali to help her harness the power of CBD into a plant-based line called 86 Elm. (It's the address of her childhood home: 86 Elm Place in Nutley, New Jersey.) The brand will launch with four products: Revival Serum, Restorative Night Cream, Rehydrating Mist, and a Replenishing Sheet Mask.

She can't reveal much more ahead of 86 Elm's debut this summer, but Stewart says the line will be accessibly priced for luxury skin care. "That's the way I've always been," she says. "I really want to give the best value for the best price."

And if anyone knows how, say, a best-in-class night cream is supposed to smell, look, and feel, it's Stewart, whose own skin-care routine is just about as high-maintenance as it gets. I ask her if she still rises at 4 a.m. and applies a mask on her face, neck, and décolleté for at least an hour, a ritual she shared with Allure back in 2014. "I did that this morning, actually. I did it yesterday morning, and I did it the day before." 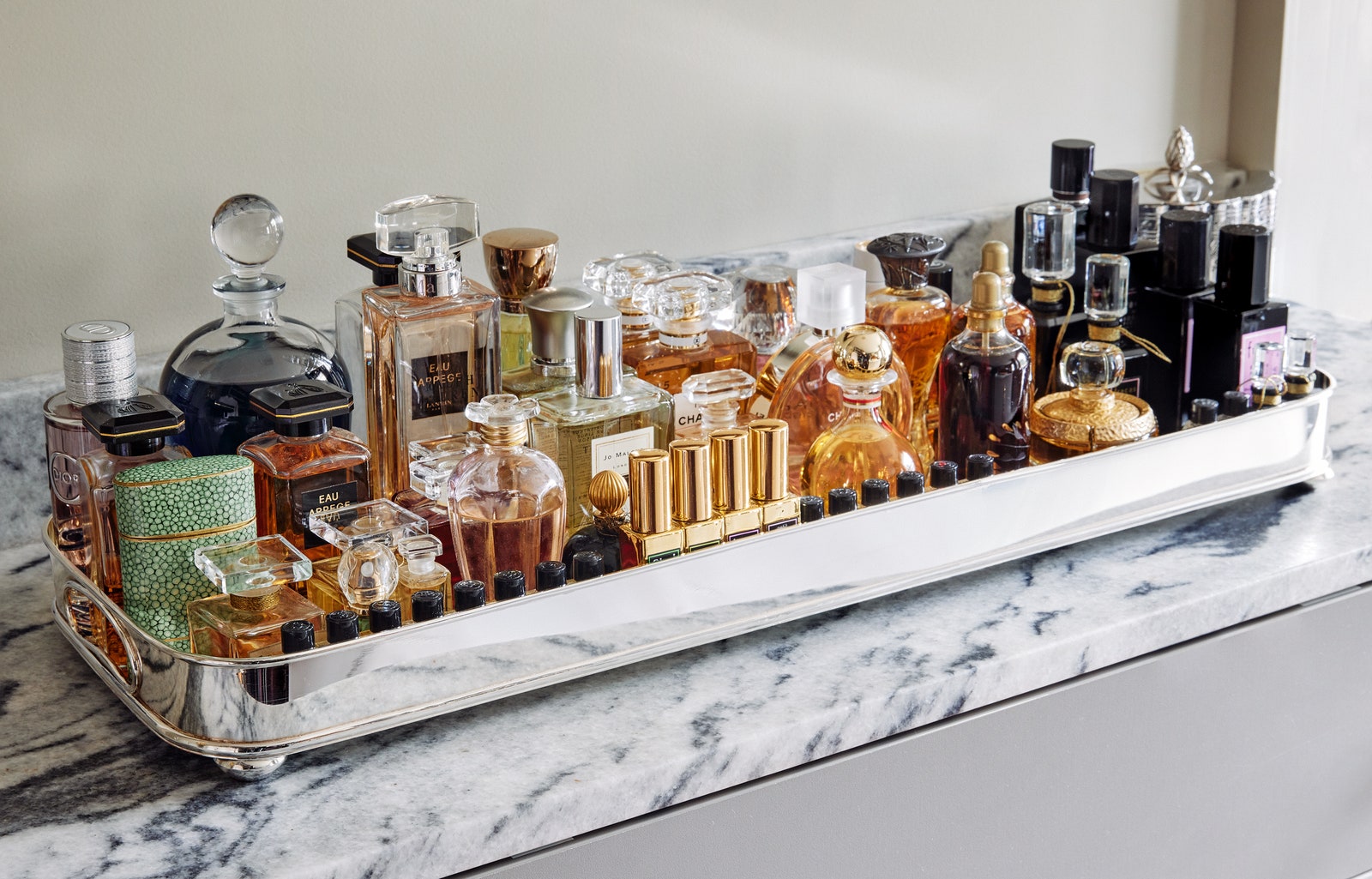 I ask how many more steps there are in her routine. "Oh, lots," she says. "First, after I take my shower, I spray myself completely with CBD tonic — head to toe, the whole thing. And my back, because you can't reach your back with cream, so I spray my whole back with all that beautiful tonic. I love tonic because it’s astringent, cleansing, as well as tightening." A vitamin C or her own "luscious" serum comes next, which she applies all over her face and décolleté. ("I might put both. I just open jars.") She tops it off with a richer cream (she likes Clé de Peau Beauté's or the new one from 86 Elm) before applying more serum, which she mixes with a Clé de Peau Beauté foundation. "That’s my foundation for the day. That's what I have on right now, nothing else, just that." (And reader, she is radiant.)

At the end of the day, Stewart takes it all off with a cleansing oil and hot washcloth. "I would never go to bed unless I have washed my face," she says. "Even if I'm with a lover, I do not go to bed with makeup on. I can't. I feel horrible."

Stewart also has a penchant for using face products (like rich creams from Sulwhasoo and Tatcha's exfoliating powder) as full-body treatments. She particularly enjoys the way the latter is packaged. "See, I like that on my shelf. I like the Clé de Peau on my shelf," she says. "I want my bathroom to look as good as me."

Make that bathrooms with an "s" because Stewart actually has two that she alternates between for her daily beauty routines at her home in Bedford, New York. The property, where she’s been camped out during the pandemic, has plenty of space to roam (she goes horseback riding at least once a week for about two hours), a full gym, and multiple greenhouses, including one dedicated solely to citrus. 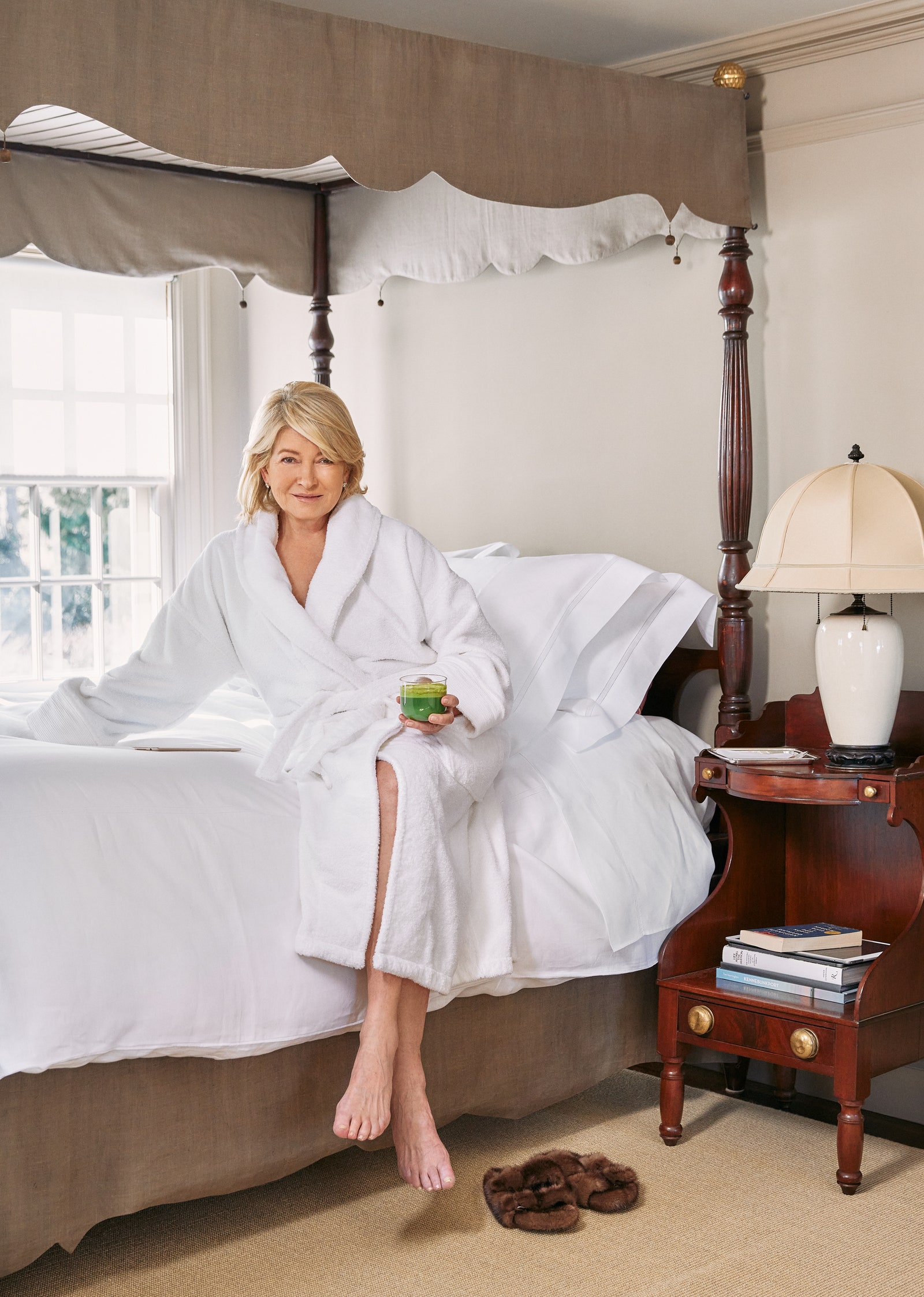 "I have good things happening every few minutes of the day," she says. "Good things" being Martha Stewart-speak for the niceties that define her personal brand, like peeling a batch of roasted garlic and putting it in olive oil to keep in the fridge for dipping later.

Of course, even Stewart has found herself parked in front of the TV over the course of the past year. "I’ve seen anything [that's] good," she says. "I'm a fanatic." Her latest binge-watch is Balthazar, a French drama about a forensic pathologist (he's "very sexy," says Stewart) who communicates with the dead.

She tells me she watches the show on Acorn TV, a streaming service I've never heard of, let alone used. It's not surprising that Stewart is an early adopter. "Well, what I care about, really, is keeping up with what's out there. I don’t like to get set in my ways," she says. "For me, change is always good. Always. It's been part of my life, change."

"I think that keeping up with technology, chemistry, happenings out in space…" she trails off before recounting with enthusiasm the mission of AppHarvest, a startup changing the way vegetables are grown around the world. She joined its board last summer.

Perhaps the one constant in Stewart's life is that throughout her home, there is classical music playing "all day long," which I can hear faintly in the background of our Zoom. "I think the animals love it," she says.

As her screen clicks off, the sounds of Mozart stop abruptly, and just like that, our time together is over. A few days later, Stewart posts a photo of herself getting the second and final shot of her COVID-19 vaccine. After all, she's got things to do.

Stewart does not like doors: "Even in my kitchen, everything's pretty much out in the open because I like to reach, grab, use, put back." And when it comes to beauty products, what she reaches for depends on the day. "I'm a big experimenter. I will experiment and edit out what I like and what I don’t like," she says. "I haven't had any disasters. Nothing's burned me or hurt me in any way, but some work much better than others, so [those are] the ones I keep." The resulting setup is, in her own words, "an edited apothecary for beauty." 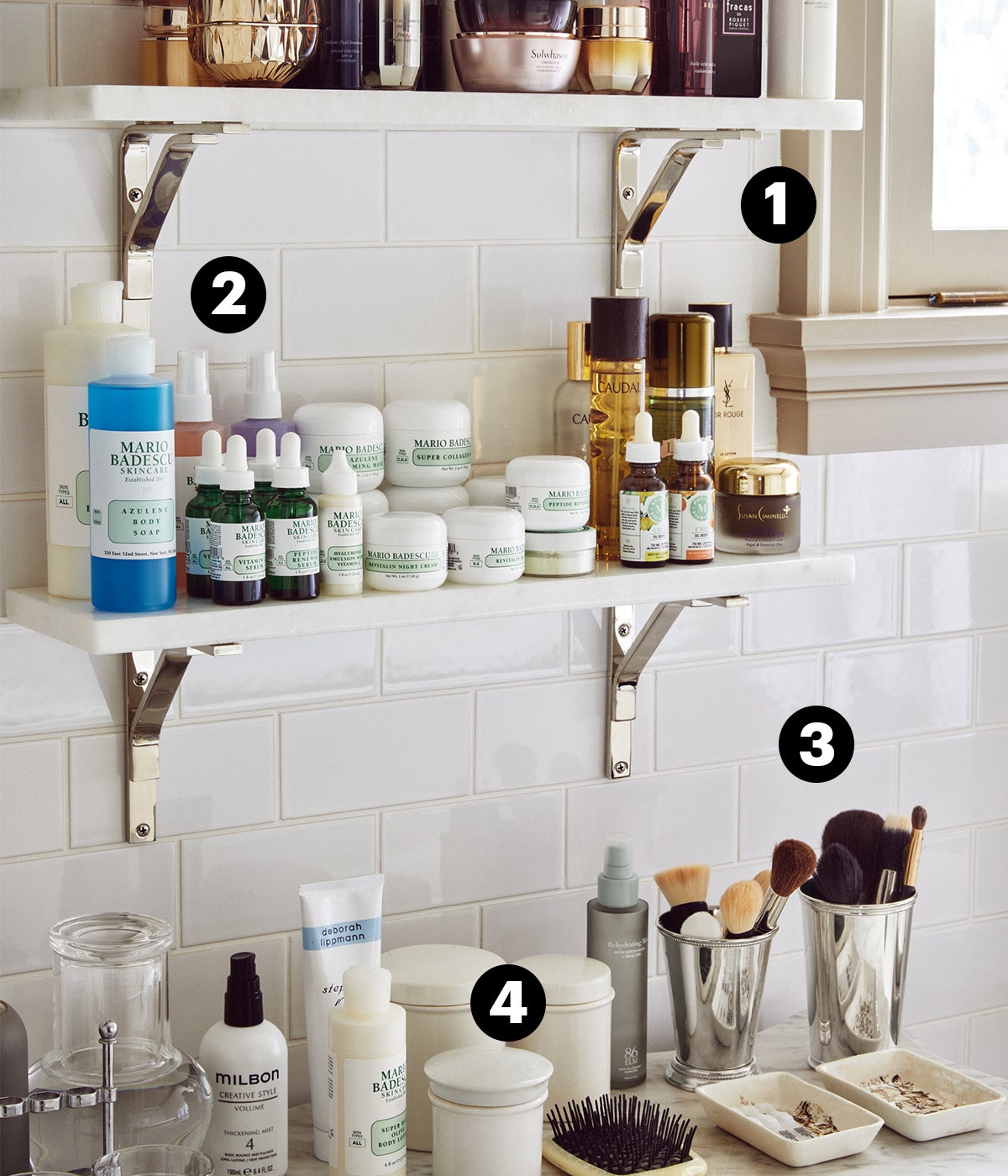