Harry Styles really gave fans a one-two-punch with his cheeky response after his songwriting collaborator, Kid Harpoon, was named Songwriter of the Year by Music Week! Upon announcing his tremendous accomplishment on Instagram on December 15, Kid Harpoon, who was a co-writer and producer on Harry’s album Fine Line, received a lot of love, save for a few snarky comments from Harry. “They found 8,000,000 opposing ballots in a bin behind his house. FRAUD,” Harry wrote. 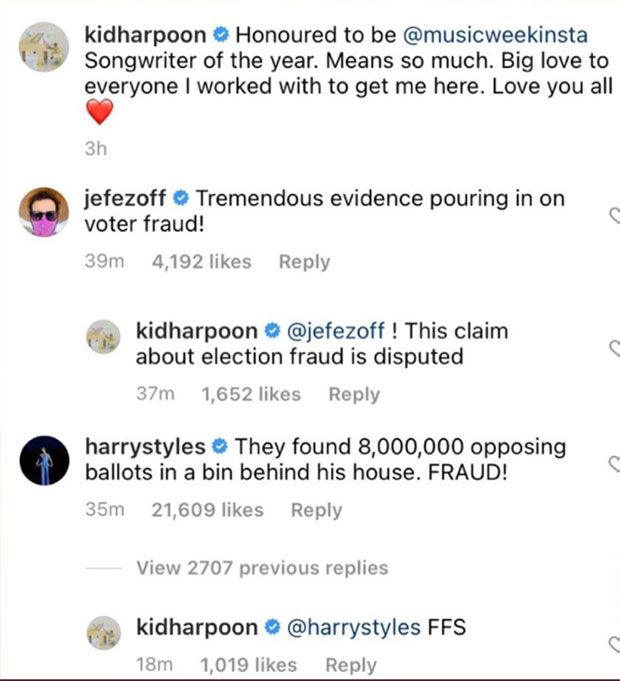 Kid Harpoon, playing along and having good fun with the jab, commented back to Harry, saying, “FFS!” Of course, one element of Harry’s comment that fans could hardly get over was its distinct likeness to President Donald Trump‘s continued Twitter rants over the 2020 Presidential Election. Since the election was officially called on November 7 in favor of President-elect Joe Biden, President Trump has tried, in vein, to overturn the results.

His legal team has levied a number of baseless lawsuits in key states like Michigan and Pennsylvania, which have been thrown out for lack of evidence. Finally, on December 14, the electoral college officially cast their ballots in favor of President-elect Joe Biden and Vice President-elect Kamala Harris, with the former Vice President and his running mate earning 306 votes to Trump’s 232. Coincidentally, that’s the same number of votes Trump earned in 2016.

Although he’s not incredibly active on social media, Harry has, in the recent past, used his platform to get political. On October 27, Harry retweeted a campaign video for then-candidate Joe Biden, with an equally thoughtful, succinct message. “If I could vote in America, I’d vote with kindness,” Harry’s tweet read. Then, of course, there’s his recent — and epic — clapback at conservative pundit Candace Owens.

After Harry appeared on the cover of Vogue‘s December issue in a gorgeous Gucci dress, Candace went after the Grammy-nominee for not being “manly” enough. As such, Harry not only defended the fashion choice, he mocked Candace’s own criticism! “Bring back manly men,” Harry captioned a photo he re-posted to social media, featuring himself in a powder blue suit with a sheer white blouse. Although it’s not often that Harry treats fans to his wry wit on social media, it’s always such fun on the rare occasion when he does!