Appearing on “The Kelly Clarkson Show” on Thursday, Garrett Hedlund revealed that his former “Friday Night Lights” co-star is now the godfather to his and Emma Roberts’ son, Rhodes.

“He’s somebody that I admire and respect, not only as an amazing father, an amazing husband [but as an] amazing musician and amazing actor — his name is Tim McGraw,” the actor, 36, told Clarkson. “I’ve known him for a long time.”

Hedlund and McGraw, 53, have shared the screen several times over the years — from 2004’s “Friday Night Lights” to 2010’s “Country Strong.” Speaking on their near-two-decade relationship, Hedlund noted that the pair has “remained such close friends” since first appearing together in the 2004 football film.

“We laugh about it because it’s been probably over 17 years that we did ‘Friday Night Lights’ together,” Hedlund recalled. “We played father and son and I got to first experience him as a father in that film — somewhat more of an abusive one — but then we did ‘Country Strong’ together, and we’ve remained such close friends.” 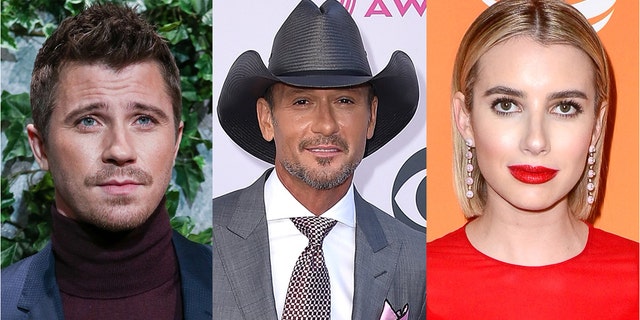 Garrett Hedlund has chosen Tim McGraw to be the godfather to his and Emma Roberts’ son, Rhodes.
(Pablo Cuadra/WireImage, AP, Jerod Harris/Getty Images)

The “Tron: Legacy” actor then told the interesting story of how he broke the news to McGraw, who had a feeling before Hedlund even said anything.

“After around the 12 weeks time of Emma being pregnant, I called him and the first thing he said was, ‘I’m the godfather,’” Hedlund revealed. “How can you argue?” he added.

Hedlund and Roberts, 30, have been romantically linked since around March 2019 and welcomed baby boy Rhodes in December 2020.