A lot of people were at least a little doubtful when Warner Bros. announced a new Batman film starring Robert Pattinson. No shade to Twilight or anything, but how does a teen-beloved vampire go on to play the greatest superhero of all-time? Luckily for us, Pattinson soothed our apprehensions—his recent movie choices, including Tenet and The Lighthouse have been exceptional, and he’s learning Brazillian jiu-jitsu for fighting scenes. Plus, his Batman costume is damn near identical to the comic version. Fans seemed to finally be coming around on this new take on Batman until, well, now.

In leaked promo art, fans are getting a look at the new Riddler, played by Little Miss Sunshine and Prisoners star Paul Dano, and, well, some of them are not happy. The unreleased photo, said to be a mistake from a tie-in calendar, shows Dano dressed up in blending goggles and a sort of mask, bearing a similar resemblance to the Zodiac Killer, a real-life unidentified serial killer who terrorized Northern California in the 1960s and ‘70s (and subject of director David Fincher’s Zodiac, one of the greatest serial killer movies of all time). And, some fans are not liking this new look: “Honestly not loving the new Riddler design for The Batman,” one fan tweeted. 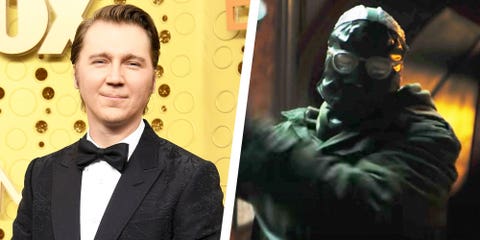 Unlike The Batman, other adaptations (Gotham, Batman Forever, to name a few) feature the Riddler in his comic book getup—a green suit marked up by question marks. However, this may be the very first time a Batman film switches up the comic book villain’s portrayal so drastically. And, while some fans hate that director Matt Reeves is moving away from the source material, others love the idea of introducing a more realistic version of the Riddler: “I freaking love this design for Riddler. I think it’s definitely one of the best reinventions of Riddler in years. Fair enough it’s not the traditional design but I love the approach to his character in this version!” a fan wrote.

Until The Batman comes out on March 4, 2022, we’re not sure if this new Riddler will work. But, his uncanny similarities to a real-life serial killer is a good sign that Dano might be bringing his A-game, even if his outfit is different from what fans are accustomed to.