Celebrity relationships are already complicated due to their public nature, but when friendships get ruined at the same time, things get even messier. That’s exactly what happened when Dixie D’Amelio and Griffin Johnson called it quits this past summer. Their breakup became the chatter of TikTok users everywhere, especially when she started dating his friend Noah Beck just two months later. While things are still up in the air between the three stars, Dixie D’Amelio, Griffin Johnson, and Noah Beck’s social media exchanges say a lot.

Once upon a time, D’Amelio and Johnson were the picture of happiness, and fans couldn’t imagine them splitting up. So when they announced their split on Aug. 2 amid speculation Johnson cheated (claims he did not directly acknowledge, but seemingly apologized for in September), fans were shook. Months later, fans were shook again when rumors swirled she had moved on with Beck, a fellow member of Johnson’s TikTok collective, Sway House. Although Beck and D’Amelio denied this for months, the rumors ultimately rang true. D’Amelio has since become more vocal about her newfound romance with Beck, but the three stars’ social media exchanges tell the story best.

On Feb. 26, Johnson uploaded a super flirty TikTok video that revealed how close he and D’Amelio were. The two didn’t kiss on camera, but they sure came close. 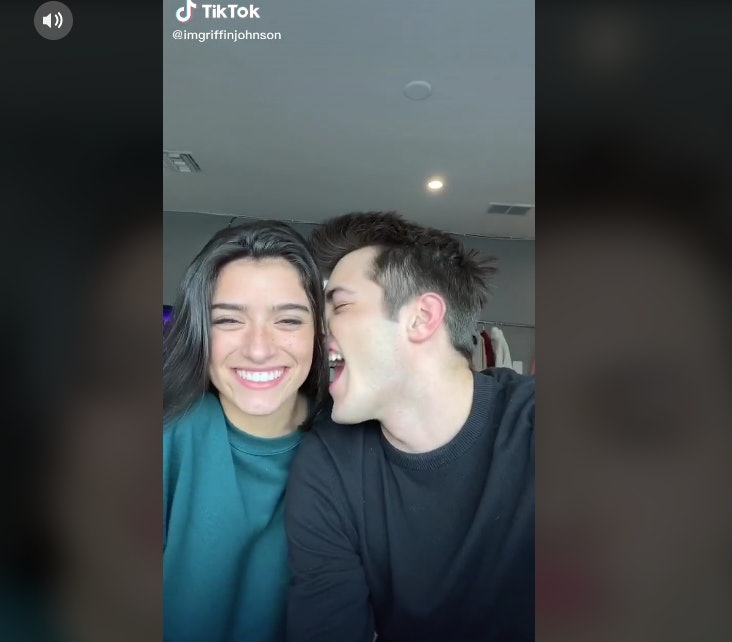 One month after their first TikTok together, D’Amelio resurfaced on Johnson’s page. This time, he did little to hide his feelings for her. He dueted a video that showed her dancing in a bikini, and Johnson looked visibly shook. "Watching Dixie like," he captioned the March 3 post. 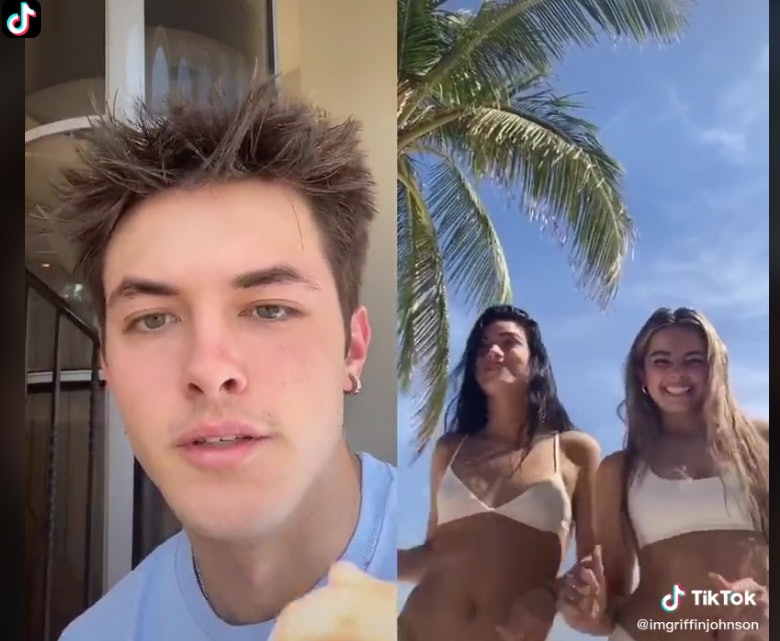 On March 9, D’Amelio tagged Johnson in an Instagram post that showed her recovering from having her wisdom teeth taken out. Johnson looked happy to be by her side to nurse her back to health.

One of Johnson and D’Amelio’s sweetest moments was when he tagged her in a TikTok featuring some of their most intimate times together. "Quarantine camera roll of stinky," he captioned the April 1 post. 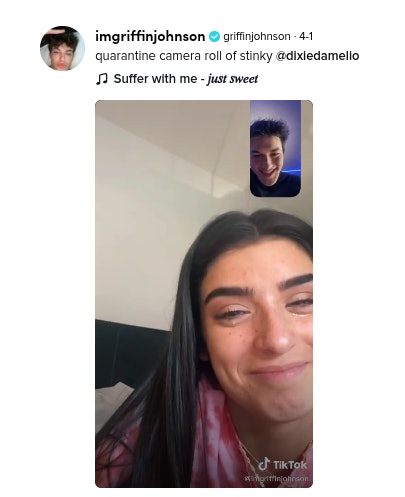 D’Amelio proved she and Johnson were going strong on June 24 when she tweeted a short message that said a whole lot. "i have a crush on griffin johnson," she tweeted, which marked the first time she explicitly addressed their romance on social media.

On July 6, Chase Hudson dropped a bombshell tweet claiming Johnson cheated on D’Amelio multiple times. "Griffin cheated on Dixie with Tayler’s ex Kaylyn and Bryce’s ex Elle," he said in one part of the lengthy post. The post took aim at several different TikTok couples, but Johnson still felt the need to defend himself.

On July 8, he took to Instagram to address the drama. “2020 is already hard enough.. quit wasting your energy on people and drama that doesn’t matter. I speak for everyone when I say that nobody cares," he wrote.

He later issued a statement on Twitter which held a much different tune. “I’m not always proud of my decisions,” he said in his Sept. 1 apology tweet. “Most importantly, I want to publicly apologize to Dixie for the hurt that I have caused. I am human, I am not proud of some of my choices.”

By Sept. 2, D’Amelio and Johnson’s relationship fell off the rails. Not long after Johnson’s cheating rumors filled the internet, D’Amelio shared a YouTube video titled "My Last Date With Griffin" and confirmed they had split.

D’Amelio intro’ed the video by saying, "Hey, so, we actually broke up, but I had this video scheduled for today, so I’m posting it anyways."

Even before D’Amelio and Johnson officially called it quits, Beck and D’Amelio seemed to be building a relationship. On July 20, she was all smiles with Beck on TikTok, enlisting him to appear in one of her dance videos. 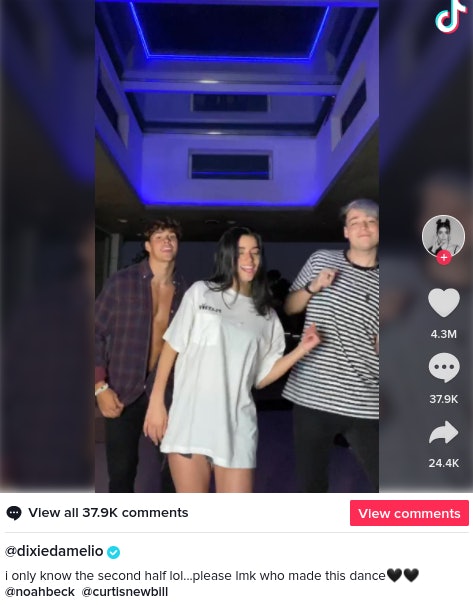 For a while, D’Amelio insisted she was focusing on herself after her breakup with Johnson and wasn’t seeing anyone. But her social media exchanges with Beck soon began to hint at a different story.

All bets were off when Beck liked a fan post about his bright "future" with D’Amelio on Sept. 2, shortly after D’Amelio confirmed her split with Johnson. The fan post included photos of the pair getting super flirty, and it was the closest thing to a confirmation of their relationship fans had received at that point.

On Oct. 6, shortly after the pair got cuddly in D’Amelio’s Sept. 20 music video for "Be Happy," D’Amelio and Beck threw in the towel on trying to keep their relationship private.

Beck confirmed they are a couple in an interview with AwesomenessTV, gushing about how "amazing" his lady is. "She is an awesome girl. It’s been really fun, and so I’m excited for the future with her," he said. This only led to more cute content from the couple.

When their one-month anniversary rolled around on Oct. 26, Beck publicly proclaimed his love for D’Amelio.

Despite being members of the Sway House and working closely together, the jury’s out on whether Johnson and Beck are really good friends. The only proof available on Instagram is this photo of them eating Tostitos and living their best life together from July 18.

It’s tough to tell where Johnson and Beck stand these days, since the two haven’t posted a picture together after this one from July (which is coincidently right around the time things went south with Grixie and started heating up between Doah).

Still, Johnson hasn’t said anything negative about her ex’s new relationship (at least not on social media), so hopefully he’s just silently supporting from afar. Either way, it looks like D’Amelio and Beck are going strong.

In Elite Daily’s It’s Complicated series, we dissect the biggest celebrity drama to find out what happened in front of the camera, behind the scenes, and everywhere in between. Read more here.