For the first time ever, Demi Lovato performed with her new short pink hair while singing ‘Lovely Day’ on the ‘Celebrating America’ inaugural special.

Demi Lovato, 28, just performed for a major audience: pretty much all of America! On Jan. 20, shortly after Joe Biden and Kamala Harris were sworn in as the 46th President and 49th Vice President of the United States, Demi performed Bill Withers‘ 1977 song “Lovely Day” for the Celebrating America inaugural special. This was also Demi’s first televised performance since chopping off her dark shoulder-length hair for a pink pixie ‘do!

Demi looked like she could take office herself in a stylish pantsuit with big hoop earrings, a look that she teased in an Instagram video leading up to the performance. “What a historic day and evening ahead,” the Disney channel alum wrote in the caption.

The invite to perform on the inaugural special came as a total surprise to the Disney Channel alum, who was more than excited to say bye to Donald Trump as he left office. “I was left speechless when I was asked to perform!,” Demi tweeted a week before her performance. We learned even more about how Demi felt about the special honor. 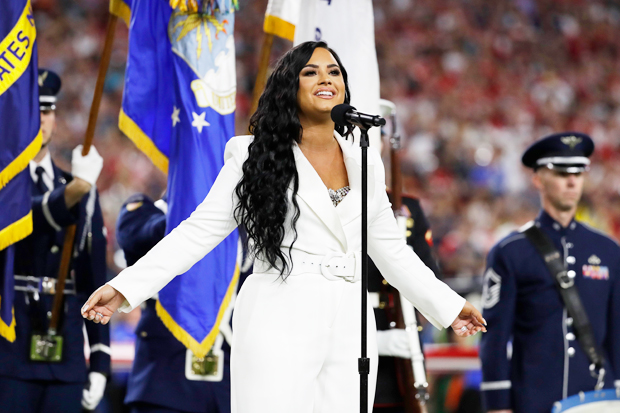 “Performing for the inauguration is a dream come true for Demi on so many levels. She’s very emotional about it,” a Demi source EXCLUSIVELY told HollywoodLife before the performance. Considering that Demi penned her own diss track about Trump in Oct. 2020, called “Commander In Chief,” our insider added, “Everyone knows how she feels about Trump, I mean she even wrote a song about it, so this inauguration means everything to her. Being asked to be a part of it, that’s just next level.”

The inaugural performance follows on the heels of Demi’s last major performance in Feb. 2020, which was almost exactly one year ago. “Demi’s highlights these past few years have only grown bigger and more memorable than she ever could have imagined. Demi thought performing the National Anthem at the Super Bowl was the biggest highlight of her career that she could have ever obtained,” another source EXCLUSIVELY told HollywoodLife. “It’s still one of her proudest moments and always will be, but to be able to have the opportunity of a lifetime to perform in front of the world at the inauguration is an honor she never imagined would be presented before her.”

In addition to Demi, John Legend, Justin Timberlake, Ant Clemons, Jon Bon Jovi, Bruce Springsteen and the Foo Fighters were invited to perform for the 90-minute inaugural special. The event was hosted by none other than Oscar-winning legend, Tom Hanks.