Before reality television, before four-letter punchlines in comedy and sex scenes in soaps, before serial killers and pathologists eating ham sandwiches over corpses on the slab, escapism on TV meant something different. 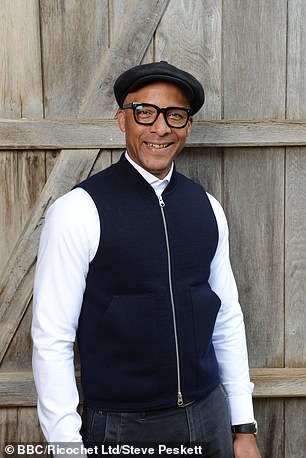 To prevent over-excitement among viewers who had just bought their first sets in the Fifties, the BBC broadcast intermissions between programmes.

The most popular of these was known as the Potter’s Wheel. A pair of hands kneaded a lump of wet clay as it spun, and coaxed it into shape — first an ashtray, then a vase, then a bowl and, after about five minutes, a broad dish.

We never saw the face belonging to these delicate hands, though they apparently belonged to a man, since he wore a baggy white shirt and braces. As he worked, the Queen’s Hall Light Orchestra played The Young Ballerina, one of those airy pieces of classical music.

The effect was soothing, even soporific. The Repair Shop (BBC1) works the same way. For a happy, stress-free hour, we can watch craftsmen and craftswomen restore much-loved heirlooms, using traditional tools and lashings of patience.

They explain what they’re doing as they go along, but mostly their soundtrack is the tap-tap of the tacks and the squeak of leather polish.

There’s nothing on the box more calming. The closest this comes to drama is the moment when the lovingly refurbished antique is unveiled and its owner wipes away a grateful tear.

The Repair Shop is strictly about an item’s sentimental value. We’re never told what that newly fixed violin or grandfather clock would fetch at auction. Often, one of the broken items brought in by members of the public will have some connection to one of the wars.

At first, when The Repair Shop was a 45-minute show tucked away at teatime on BBC2, I assumed researchers picked these things because they come with such good stories. But there seems to be an inexhaustible supply, and now I suspect that people treasure them because, at the toughest time of their lives, their parents and grandparents relied on these objects — a clock, a sword, a pen or practically anything else.

This time, it was a leather armchair that a brave Frenchman hid in his cellar under heaps of coal, rather than let Nazi officers commandeer it. When he finally brought it back upstairs, after D-Day, it was shredded by flying glass in a bomb blast.

That chair had quite literally been in the wars, and the careful skill of restorers Hannah and Suzie, as they revived it without sacrificing its battered charm, was a joy to see.

If you prefer your escapism violent and blood-spattered, Save Me Too (Sky Atlantic) saw the return of Lennie James as Nelly, a hard-drinking Londoner fighting to free his teenage daughter Jody from the clutches of a sex-trafficking gang. The cast is stupendous — Suranne Jones as Jody’s mother, Stephen Graham as his best mate, Kerry Godliman as his girlfriend, Adrian Edmondson as an underworld auctioneer . . . the list goes on.

The dialogue, written by James, is wordy speechifying, but that’s not what puts me off. There’s just nothing to like about Nelly, a bullying alcoholic who ignored his daughter all her life and now expects everyone to uproot their own lives to help him find her.

He sneers, yells, passes out, cadges money and never changes that yellow puffa jacket, which must smell like a decomposing badger. The first episode was all about the surprise 50th birthday party thrown for him by his devoted pals. Why would they?