Naga Munchetty calls Carol Kirkwood ‘one of the best forecasters’

Carol Kirkwood, 58, was missing from BBC Breakfast, as the meteorologist reacted to her co-star Matt Taylor, 44, who stood in for the weather forecaster. He revealed a cheeky “imposter” was in the studio as Carol’s replacement.

Taking to Twitter, Matt explained that the show’s boss, Richard Frediani, had assumed that Carol would be fronting the weather but was mistaken.

In view of his 34,600 followers, the meteorologist admitted he didn’t want to “disappoint” so unveiled a show stand-in.

Matt penned: “Morning all! My @BBCBreakfast boss @BBCFrediani thought it was the wonderful @carolkirkwood on weather duties today. And you know me …I don’t like to disappoint! See you from 6am.”

He accompanied the post with a candid clip that showcased a Carol cardboard cut-out which he held in front of him. 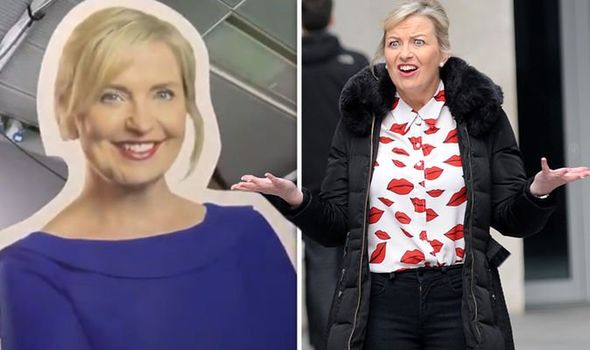 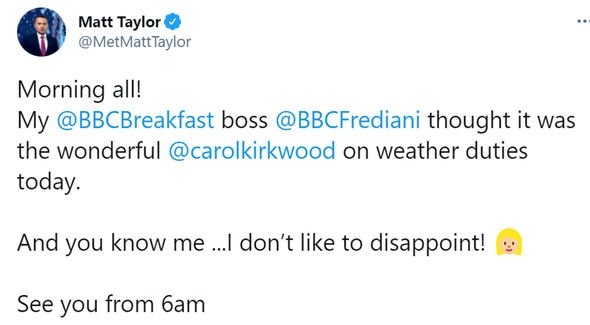 Spotting the tweet, Carol replied with a series of crying with laughter and kiss-face emojis.

Matt followed up: “Worst imposter ever!!! Miss you x”

The BBC weather favourite took the opportunity to address her recent absence as she confirmed her return to the show this week. 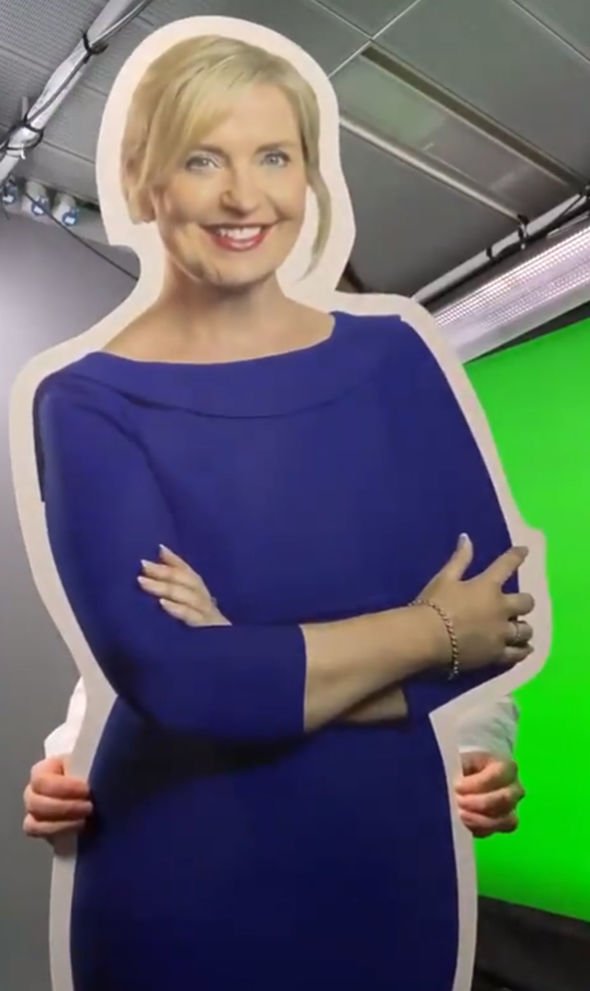 Viewers flocked to comment on Matt’s tweet, as one quipped: “Looking unusually flat today, Carol! Hope you have a lovely day.”

Another quizzed: “Was that from your own personal collection? We all need a smiling Carol Cardboard Cutout (sic) in our lives.”

Matt responded: “Yes! I suppose I’m very lucky that I have the real thing as well.”

A third added: “An impersonator Carol? There is only one true queen of the BBC weather and you are that very person.”

“Thanks for the chuckle,” a social media user remarked.

Carol recently took a break from her weather presenting duties but is due to return this week.

It comes after viewers recently quizzed the meteorologist about her role on Breakfast after weather forecaster Owain Wyn Evans stepped in.

Carol, who presents on weekdays, has spent more than two decades presenting the weather at the BBC.

Earlier this month, Owain stepped in at the weekend to front the weather forecast and was met with praise from viewers.

One user said they were “loving the new happy, happy weatherman” and another praised his “great weather reporting”.

A third wrote: “Morning Owain, a breath of fresh (if chilly) air having you on the box and in the studio this morning.”

BBC Breakfast airs weekdays on BBC One at 6am.