Cardi B has proven time and time again in 2020 that she isn’t going to stay silent when it comes to her beliefs. In recent months, she’s been vocal in her support for presidential candidate Joe Biden, as well as her disapproval of President Donald Trump and his policies. Still, people continue to take aim at the rapper for her beliefs, like conservative commentator Candace Owens, who clearly is not a fan of Cardi. Cardi B’s response to Candace Owens criticizing "WAP" turned the focus to some extremely important issues.

Owens first caught Cardi’s attention when she called out the artist for her recent sit-down interview with Biden. Owens, while sitting down for an interview on The Ben Shapiro Show, blasted Cardi for her open conversation with Biden about police brutality in the United States, among other things. Multiple times Owens referred to Cardi as an "illiterate rapper."

Calling out Cardi — and her music — directly, Owens captioned an Instagram clip of her comments: "Since most black people didn’t have the spine to admit that @benshapiro was 100% correct about @iamcardib and how her music and platform contributes to the disintegration of black culture and values."

Cardi didn’t wait long to hit back at Owens for her critical comments. "You wanna know why joe gotta talk to me Candice cause I have the #1 song & yet my sister can’t go to the beach in the Hampton’s wit out trump supporters harassing cause they were by themselves & Santa Claus was harassing my sis GF all because they are a Afro/Hispanic gay couple," she captioned a video that shows her sister, Hennessy, in the midst of a confrontation with a male wearing a "Make America Great Again" hat.

Owens replied asking Cardi, "To clarify—Joe Biden ‘gotta talk’ to you because you have the number 1 song and Santa Claus was harassing your sister? Um. K. Thanks for clearing that one up." 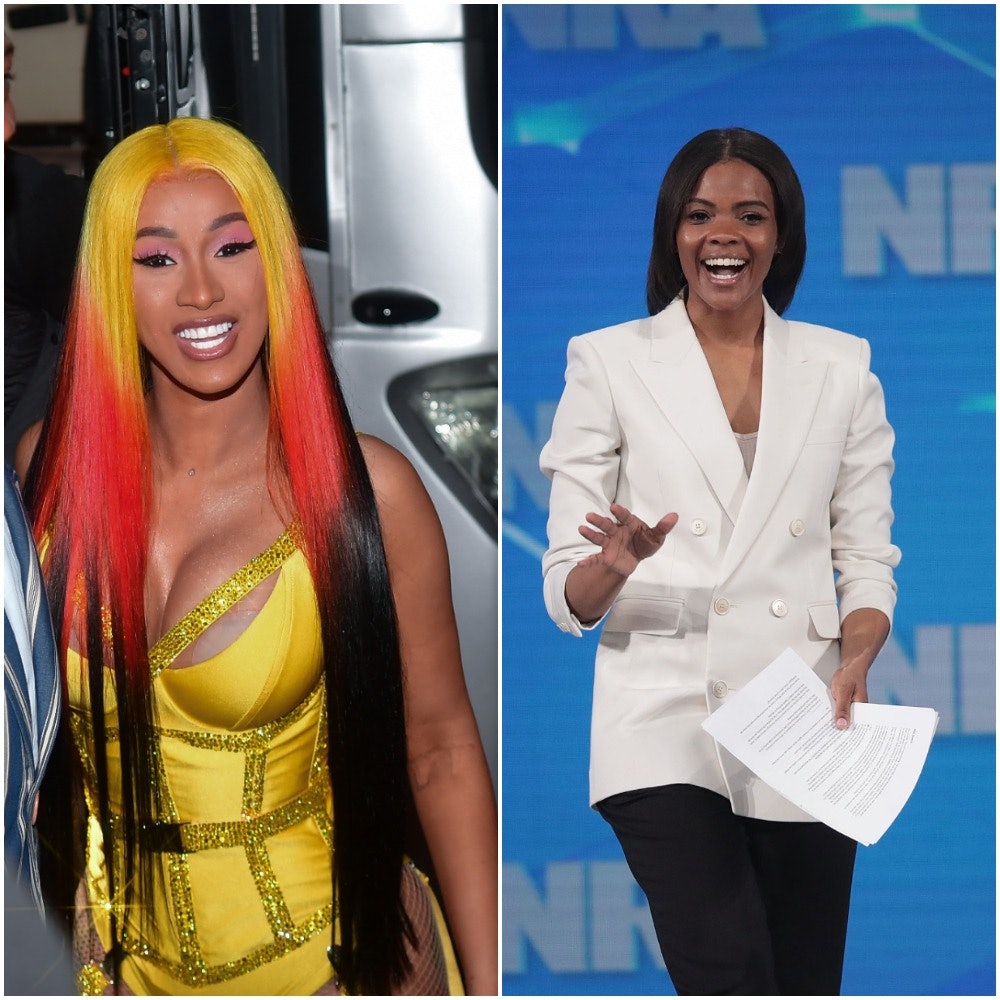 Cardi shot back: "Yes you are right I have the number 1 song & I have a huge platform and I can make millions go vote to get the MAN THAT USED YOU .I don’t want to argue with you Candace I really don’t have the time .I honestly just feel sorry for you."

The back-and-forth didn’t end there, either. Owens slammed Cardi for "encouraging MILLIONS to go vote for the man that locked up entire generations of black men," referencing Biden’s 1994 crime bill.

Cardi shot back, "& you are encouraging millions to vote for a man who laugh Everytime a black men gets killed by a cop and tell millions of Americans to drink bleach. Trump didn’t even have you talking at the Republican convention. He thinks you’re dumb."

Amid all the drama, Cardi brought attention to the fact that the public bashes celebrities for not standing up for what they believe in, but then tears them down when they finally speak out.

"People claim artist we don’t do enough then when we do it’s also something," she wrote. "I get to the point I get discouraged but when I see the news I get fired up again !I WONT STOP. MY VOICE IS POWERFUL!"

The following day, Owens posted a video to Instagram addressing the situation. "Dear @iamcardib. You know nothing," she captioned the clip. "Stop using your platform to call for more black deaths.Stop lying about Trump.Stop supporting Joe Biden who supported segregation and the mass incarceration of black men.I’m almost six months pregnant but got the time to rip you a new WAP."

Cardi also posted two since-deleted videos aimed at Owens, writing alongside one: "The type of people that drag me all day online all cause I hate trump. This girl tho she makes me sad. She have a identity issue. She hates her own kind…"

At the end of all of this, I think it’s safe to say the two women can agree on one thing: That they’ll always disagree when it comes to politics.