Stuck with him! Ariana Grande went Instagram official with her boyfriend, Dalton Gomez, ahead of her birthday.

The Grammy winner shared a selfie with the real estate agent on Thursday, June 25, as part of a nine-slide post documenting her time in quarantine amid the COVID-19 pandemic. Many of the photos featured her dogs, but fans were excited to see the couple getting cozy by a pool in the seventh slide. 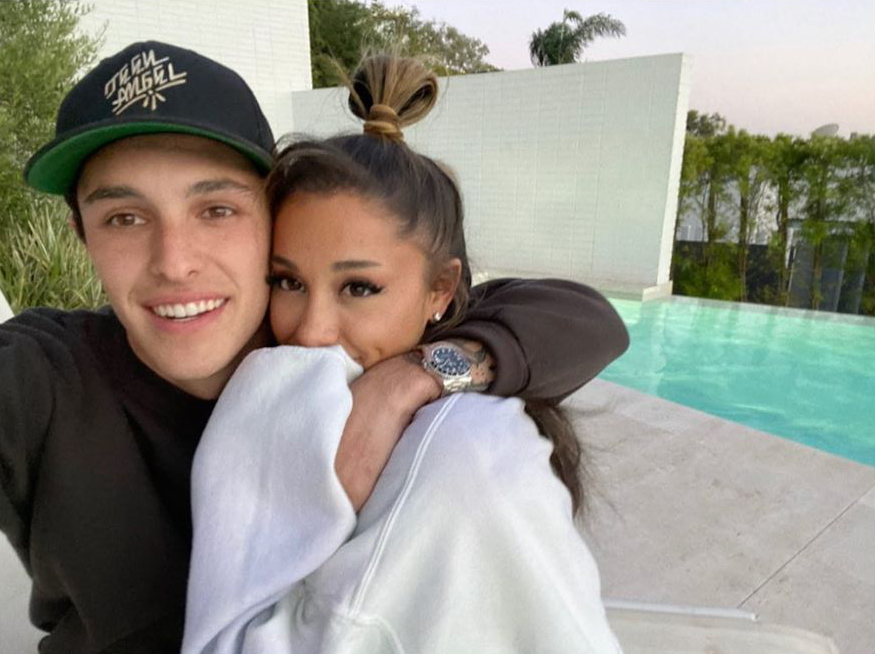 The “Thank U, Next” singer turned off comments on her Instagram post, but her fan base was quick to flock to Twitter to celebrate her relationship milestone.

Grande, 26, and the Aaron Kirman Group employee were first spotted together in early February, when TMZ published a video of them making out at Bar Louie in the Northridge neighborhood of Los Angeles. The following month, Us Weekly confirmed that the pair are dating.

The pop star showed off her boyfriend for the first time in her and Justin Bieber’s “Stuck With U” music video in May. The couple slow-danced and hugged in the blink-and-you-miss-it scene, which they filmed themselves while self-isolating at home. Later that month, Gomez made a cameo in a hilarious promotional video for Grande and Lady Gaga’s collaboration, “Rain on Me.”

The California native “holds one of the largest Rolodexes of A-list buyers … [and] is quickly becoming an industry titan,” according to his bio on the Aaron Kirman Group website. In 2019, he sold Grande’s music attorney Aaron Rosenberg’s $7.5 million L.A. home to The Big Bang Theory alum Kunal Nayyar.

Prior to Gomez, Grande had high-profile romances with rapper Big Sean from 2014 to 2015, her backup dancer Ricky Alvarez from 2015 to 2016 and Mac Miller from 2016 to 2018. She was also engaged to Pete Davidson for four months in the summer of 2018. Grande’s relationship with the Saturday Night Live star, 26, ended after Miller died at age 26 from an accidental drug overdose.

“By no means was what we had perfect, but, like, f–k. He was the best person ever, and he didn’t deserve the demons he had,” she told Vogue in July 2019 of the late rapper. “I was the glue for such a long time, and I found myself becoming … less and less sticky. The pieces just started to float away.”