Joe Biden used his first primetime address as president to call attention to the rise of anti-Asian racism amid the COVID-19 pandemic, calling the attacks “un-American.” Biden, who delivered his March 11 speech on the one-year anniversary of the first pandemic shutdowns, condemned those who have committed “vicious hate crimes against Asian Americans who’ve been attacked, harassed, blamed and scapegoated.”

“At this very moment, so many of them, our fellow Americans, they’re on the front lines of this pandemic trying to save lives, and still, still, they’re forced to live in fear for their lives just walking down streets in America,” President Biden said. “It’s wrong, it’s un-American and it must stop.” Biden is trying to make that happen. Since the beginning of 2020, Asian Americans have reported a rise in racist attacks and harassment after news broke that the novel coronavirus originated in Wuhan, China.

Stop AAPI Hate revealed that, by the end of 2020, they had received more than 2800 reports from Asian Americans who had been called racial slurs, were physically assaulted, and more. The surge of hate crimes and racial harassment surged as former President Donald Trump repeatedly blamed China for “bringing” COVID-19 to the United States and calling the deadly illness the “Chinese virus,” the “China virus,” the “Kung-Flu,” and more. In September 2020, Rep. Grace Meng (D-NY) introduced a mostly symbolic bill that called on “all public officials to condemn and denounce any and all anti-Asian sentiment in any form” and urged officials at all levels to document and investigate any reports of anti-Asian hate crimes. 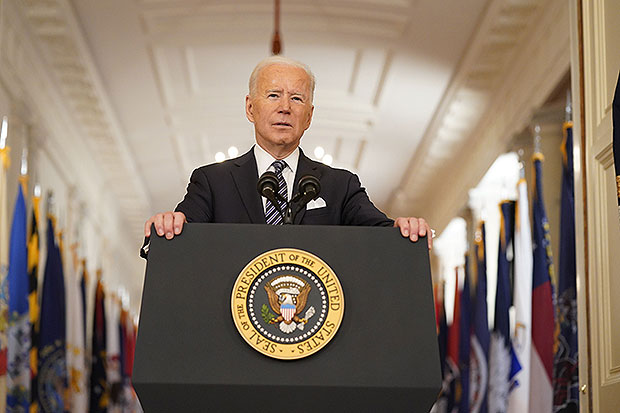 The president was roundly applauded online for his speech. “Thank you President @JoeBiden for your leadership and speaking out against Asian American hate,” one Twitter user wrote following the address. “The last guy released a statement yesterday using an anti-Asian slur to discuss the virus,” another person tweeted, referring to Trump. “Tonight, in primetime, Joe Biden condemned AAPI hate & violence. Those distinctions quite literally save lives.”

Biden also revealed in the speech that he is directing the states to make all adults eligible for the COVID-19 vaccination by May 1 — two months earlier than anticipated. He stated that his initial goal, administering 100 million vaccines in his first 100 days of office, will be achieved on Day 60. Biden urged Americans to “stick to the rules” and not derail progress. “We’ve made so much progress,” he said. “This is not the time to let up.”