The 56-year-old actor opened up about his chat with Barbara, 83, and her husband Scott Mitchell, 57, at the weekend. Barbara played Peggy Mitchell on the BBC1 soap until 2016, while Ross starred as her on-screen son Grant Mitchell.

Talking on Good Morning Britain, Ross said: “I spoke to her on FaceTime on Sunday along with her husband Scott.

“She recognised me but I think we all have to be realistic that there is no cure for Alzheimer’s presently and it’s probably not going to get better for her.”

Her condition worsened in June and she moved to a care home at the end of July.

Scott, who married Barbara in 2000, previously opened up about the decision to move Barbara into a care home.

He said: “I feel I’m on an emotional rollercoaster. I walk around, trying to keep busy, then burst into tears. 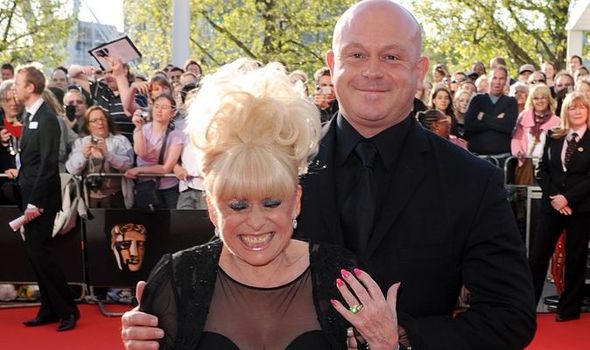 “It feels like a bereavement. It’s always been my biggest fear, that one day I would have to take her somewhere and she would be thinking, ‘Why would he do this to me?’ That fear has become a reality. It’s something that I never wanted.”

Dame Barbara was diagnosed with the irreversible, progressive memory disorder in 2014.

There were around 850,000 people with dementia in the UK last year, the Alzheimer’s Society said. This represents one in every 14 people over 65.

Dame Barbara is an ambassador for the The Royal British Legion’s annual poppy appeal.

Ross yesterday told GMB viewers: “The reason I’m doing this is because I’m effectively standing in for her.”

Urging them to leave a red poppy in their windows in support of Remembrance Day, he added: “It’s an honour to be talking on her behalf.”

Explaining the reduction in collections this year due to the pandemic, he said: “There’s normally around 40,000 people out on our streets collecting for the Royal British Legion.

“We know that’s going to be down by some 30 per cent at least, so this year every poppy counts.”

He added: “I know there are a lot of people out there suffering.

“We know that particularly in the armed forces community there are people suffering.”