Arnold Spielberg, the father of director Steven Spielberg died surrounded by family in Los Angeles Tuesday at the age of 103.

Spielberg, born in 1917, earned a degree in electrical engineering after serving as a radio operator and chief communications man for the 490th Bomb Squadron in World War II.

He became a computer designer who helped create the GE-225 mainframe computer, which led to personal computers, according to the Hollywood Reporter.

He also went on to work for General Electric and IBM. 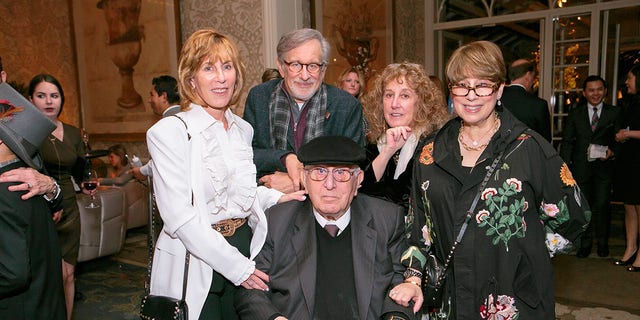 Arnold Spielberg is surrounded by his children, Nancy Spielberg, Steven Spielberg, Anne Spielberg and Sue Spielberg, at the celebration of his 100th birthday in 2017.
((Photo: Business Wire via AP))

“When I see a PlayStation, when I look at a cell phone — from the smallest calculator to an iPad — I look at my dad and I say, ‘My dad and a team of geniuses started that,’” Steven Spielberg, 73, said of his father, according to Variety.

Steven Spielberg and his three sisters, Anne, Nancy and Sue said in a statement that their father taught them to “love to research, expand their mind, keep their feet on the ground, but reach for the stars [and] look up,” according to the Reporter.

The director said his father also helped him with the first film he ever made when he was 17 called “Firelight,” which showed in one movie theater in 1964 and he has said his father’s experiences in the war inspired him to direct “Saving Private Ryan.”

In 2012, he was awarded the USC Shoah Foundation Institute's inaugural Inspiration Award for his work in creating a system to record the testimonies of thousands of Holocaust survivors. The Shoah Foundation was founded by Steven Spielberg.

As well as his four children, Arnold Spielberg is survived by four stepchildren; 11 grandchildren; and eight great-grandchildren, according to The Reporter.

Steven Spielberg is an Oscar-winning director of "Saving Private Ryan" and "Schindler's List." He has also directed "Jurassic Park," "Jaws," the "Indiana Jones" series and dozens of other classics.