The Luyendyk twins are here! Arie and Lauren Luyendyk shared the first images of their newborn twins — a boy and a girl — on social media after expanding their family

Arie and Lauren Luyendyk are giving their fans the first look at their adorable newborn twins. The couple, who met and fell in love on season 22 of The Bachelor, posted the first images of their new additions — a boy and a girl — to Instagram on Monday, June 14, two days after Lauren, 29, gave birth on June 12. The couple are also proud parents to daughter Alessi, 2.

Lauren’s post featured a photo of the now-mom of three cradling her new babies in the hospital bed shortly after delivery. A second photo captured the twins sweetly laying beside each other in bed. Lauren wrote in the caption of her post, “6.11.21 @luyendyktwins 🤍🙏🏼.”

Arie, 39, shared the same photo of his wife and their babies, as well as close up shots of his new son and daughter, whose names have yet to be revealed. He wrote in his caption, “Never been prouder of my wife than in this moment. She is the strongest woman I know and I’m lucky to be on this incredible journey with her. We are proud parents of a healthy boy and girl!”

Arie documented the couple’s hospital journey on his Instagram Story before the twins arrived. On June 12, Arie said his wife was “so excited” to welcome the babies. He later posted a photo of himself in scrubs while Lauren was being “prepped” for delivery. Just a few hours later, they became parents of three!

Arie and Lauren had a drama-filled journey on The Bachelor in 2018. Arie actually initially chose Becca Kufrin as his season’s winner and dumped Lauren during the finale. But as the show was airing, Arie ended things with Becca and pursued a relationship with Lauren. By After the Final Rose in March 2018, they were fully back together and got engaged during the live after show. 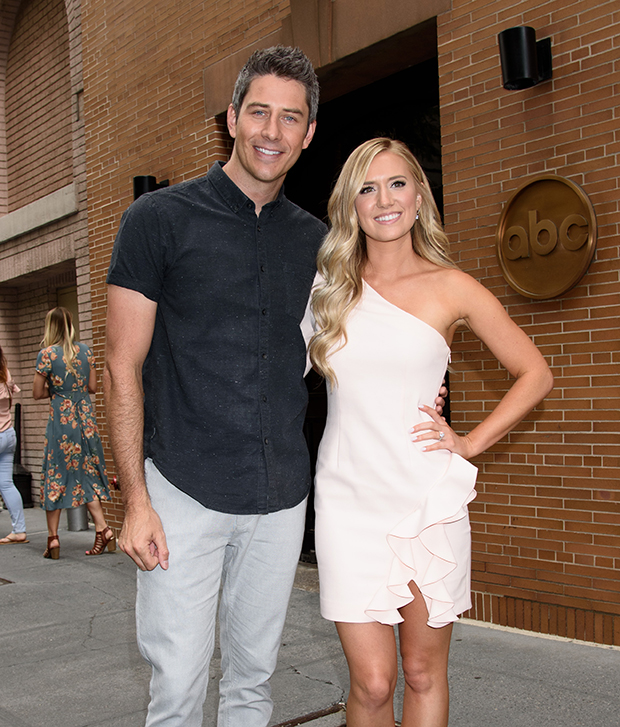 In January 2019, Arie and Lauren tied the knot in Hawaii. At the time, Lauren was already pregnant with the pair’s first child. Their first bundle of joy, Alessi, was born in May 2019.

Arie and Lauren later announced in December 2020 that they were expecting again. Weeks later, they shared the shocking news that this time it was twins! Congrats to the happy family of five!