Meghan Markle is expecting her second child and Princess Eugenie just had an adorable baby boy—both very happy pieces of news that really shouldn’t be cause for drama! But due to reports that Eugenie was less-than-thrilled when Meghan and Harry’s first pregnancy “upstaged” their wedding (apparently “it did not go down particularly well”), there’s speculation that there is once again tension. Which…NOPE!

People reports that there’s zero truth to chatter than Eugenie is feeling upstaged, with a family friend saying “They would have known about each other’s due dates,” and another insider confirming “These times tend to bring families together. What is lovely is Eugenie having her baby as Harry and Meghan are having theirs. They are very close. And they are all deciding to go their own route.” 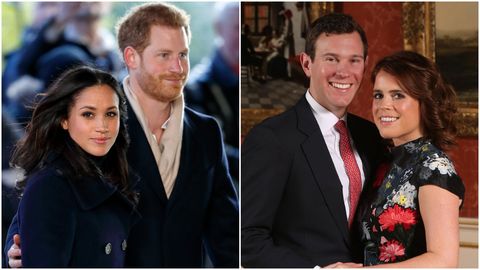 On top of that, People’s sources said there’s absolutely no reason to read into the fact that Prince William and Kate Middleton didn’t offer individual well wishes to Meghan and Harry on the announcement of their pregnancy. Instead, “the firm decided to have an overarching message.”

All that aside, there *is* some tension in the royal family right now thanks to the Sussexes being stripped of their patronages, and Meghan and Harry are expected to dive into it during their Oprah tell-all, so stay tuned!

You love all the deets on the royals. So do we. Let’s overanalyze them together. ✔️