Gabrielle Chanel’s lucky number was five. For Karl Lagerfeld it was seven. And for Riccardo Tisci, it’s 17, which is apparently why he puts that number on T-shirts and at the end of his Instagram handle.

That’s just the tip of the iceberg when it comes to superstitions in the fashion industry, where fortune tellers, tarot cards, good-luck talismans and even shamans have been prized for eons. So today, on Friday the 13th — always considered an unlucky day — designers must be scurrying for any rabbits foot they can find.

It’s plain that an irrational belief in supernatural influences lies behind the fragrance the late Alber Elbaz created in 2017 with Frederic Malle, dubbed Superstitious; why former Dior couturier Gianfranco Ferré never included a look No. 17 in his collection — it was always 16bis, and why four-leaf clovers and evil-eye motifs have become so popular in recent jewelry collections.

“The idea that superstition comes in part from a feeling of a lack of agency and financial anxiety would be significant for people in fashion because it does so much seem like you need luck to get ahead,” she said, noting that designer Arnold Scaasi used to consult a fortune teller regularly about his lucky numbers, which would help him choose when to show his next collection.

According to Steele, Scaasi shrugged when a reporter looked askance at his practice.

“It doesn’t hurt to have a little extra luck” was the retort. “Diane von Furstenberg apparently had some coins with a family connection that she’d always put in her shoe before a fashion show. I think many people have this idea that they have a certain lucky piece of clothing or jewelry,” Steele added.

Christian Lacroix said he has been gifted so many good-luck talismans over the years — including a gold Napoleonic coin from legendary embroiderer François Lesage and a copper lion figurine from the late American editor Carrie Donovan — that carrying them in his pockets was no longer feasible.

Considering three, and multiples of it, his lucky numbers, he usually had 36 or 63 outfits in his collections. And he visited Madame Mallais, a fortune teller popular among the fashion crowd in the 1970s when he was still a student at La Sorbonne in Paris. She scribbled something on a piece of paper and asked Lacroix what it might represent, and also told him he would meet “a guy who will be very important in your life named Arnaud.”

Years later, Lacroix would realize the sketch was his CL fashion logo and that Arnaud (the French spelling for the name Arnold) in fact referred to Bernard Arnault, the luxury titan who plucked him from Patou and set up a couture house just for him in 1987. 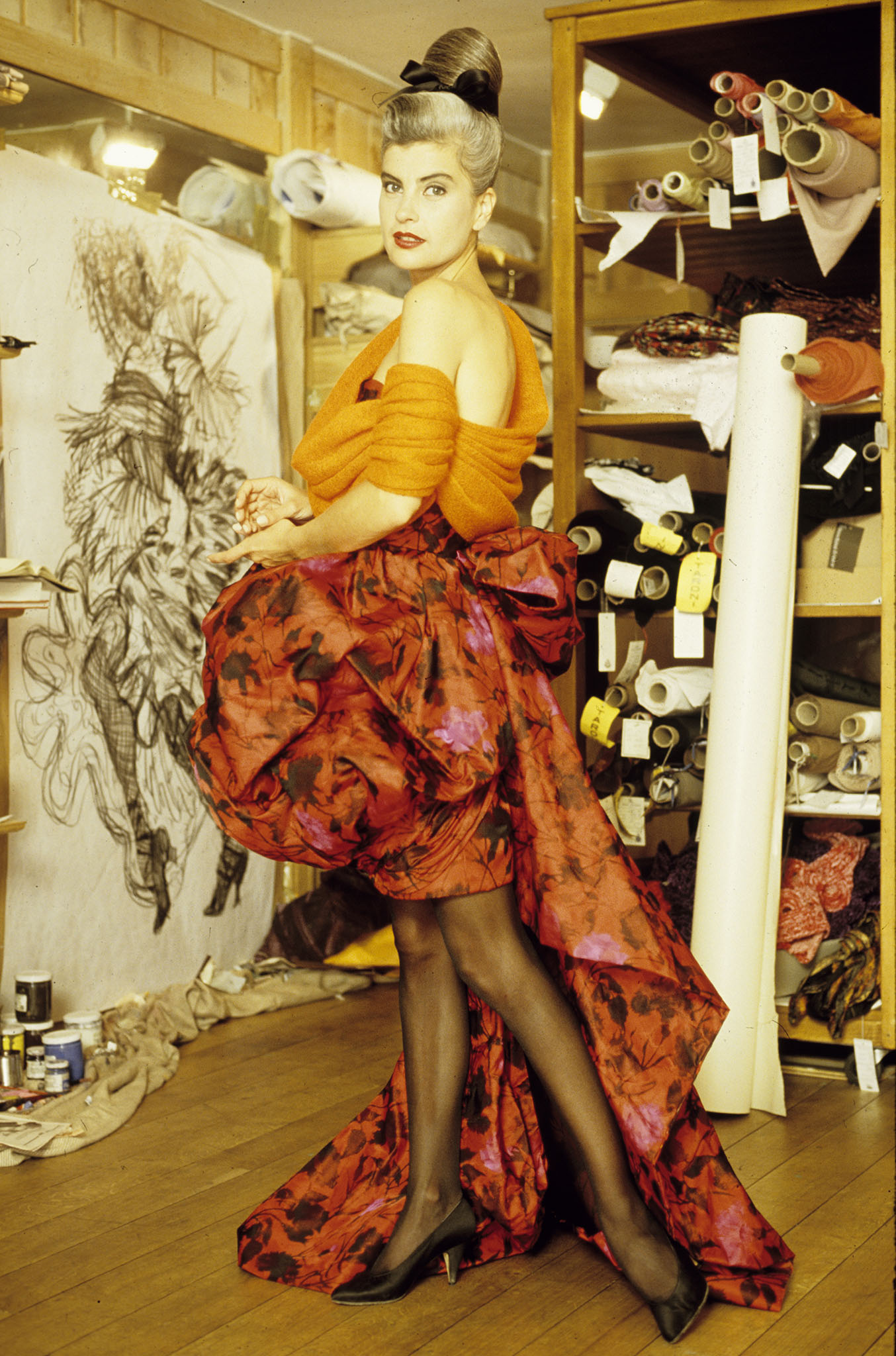 Paris-based jewelry designer Elie Top has worked alongside many designers with superstitious tendencies, fishing out a photo of himself at age 18 when he was an intern at Dior. It shows him clutching look number 16bis on a hanger backstage at a fashion show, with Ferré in the background.

(Like many Italians, Ferré considered the number 17 unlucky. Tisci, by contrast, apparently embraced it because the 17th card of the tarot, known as The Star, is auspicious.)

Top also worked briefly with Yves Saint Laurent, who had been known to visit fortune tellers, believe his dog Moujik possessed special powers and kept bronze lions for luck, and with Elbaz, who would never hand anyone a pair of scissors, always placing them on a table.

In a 2015 interview, Lagerfeld recalled a spooky premonition from his youth. “It’s unbelievable, I don’t know how it happened — it’s so strange, this fame thing. But as my fortune teller told me when I was young, she said: ‘For you, it will really start when it’s finished for the others.’ It’s quite true.”

Top said he does not consider himself superstitious, yet he sensed a hunger for reassuring symbols during the pandemic, which led to a collection released late last year dubbed “Lucky Charms” hinged on clover-, heart- and star-shaped forms. He said it sold “very well.” 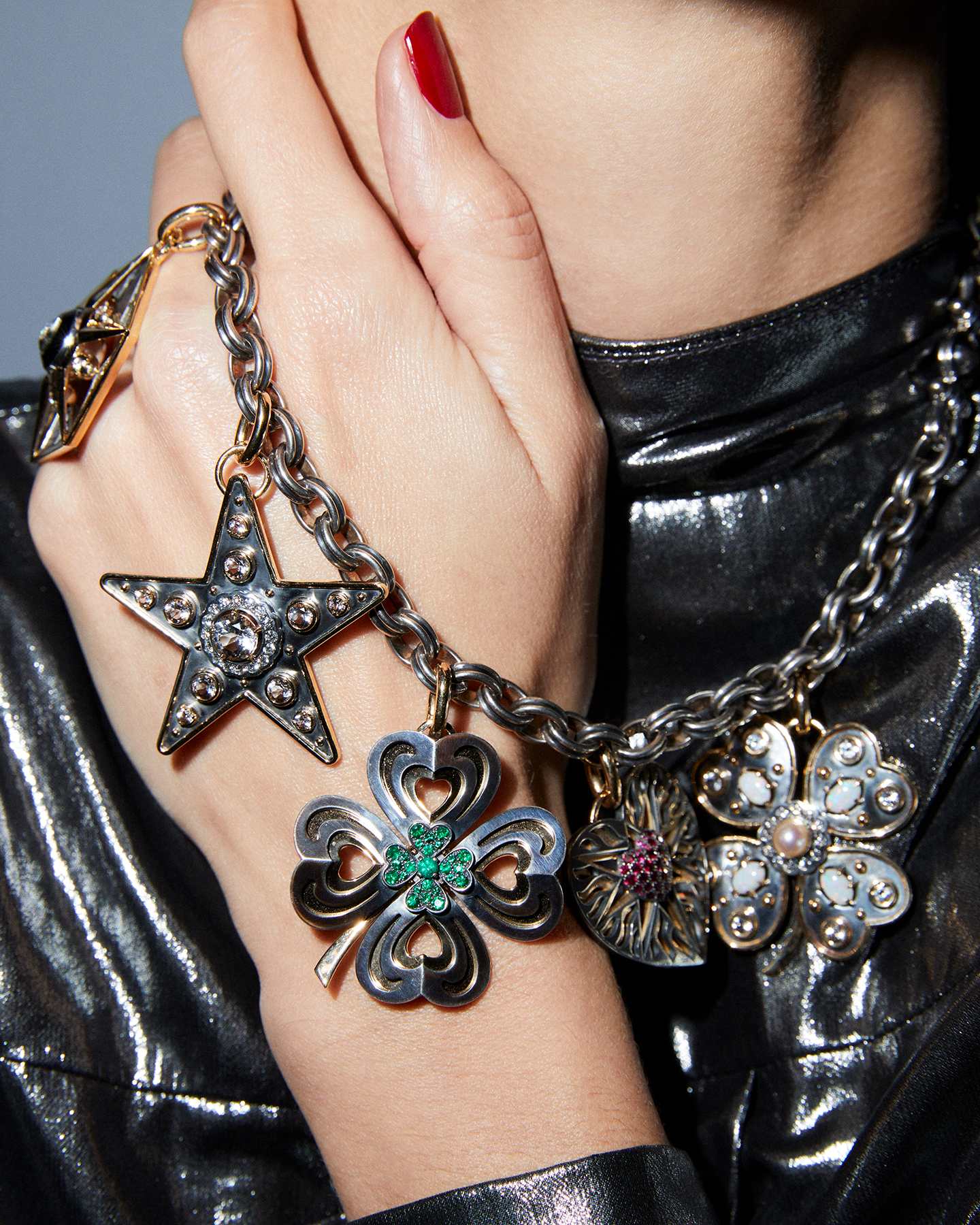 “That’s what I was feeling was relevant for people,” he said. “It’s something with a meaning, so it’s even more precious, and if you give it as a gift, it’s like you’re offering a person some protection.”

Top has also referenced zodiac signs and astrology in other collections — and he never hands anyone a pair of scissors.

Christian Dior ranks as one of the most highly superstitious designers of all time. He onsulted a clairvoyant, Madame Delahaye, for all his major decisions, and who clung to a metal star he stepped on one evening in 1946, taking it as a sign that he should launch his own couture house.

Among talismans he collected was lily of the valley, commissioning his florist to produce it year round so he could always carry a sprig of the spring bloom with him.

Legend has it that Madame Delahaye urged Dior not to travel to Montecatini, Italy. He died on the ill-fated voyage in 1957, at the age of 52.

Dior’s current couturier Maria Grazia Chiuri has referenced the house’s superstitious past, basing her spring 2021 couture collection on the divinatory arts, in particular a 15th-century tarot deck designed for the Duke of Milan, which informed the palette of dusty jewel tones and old gold. 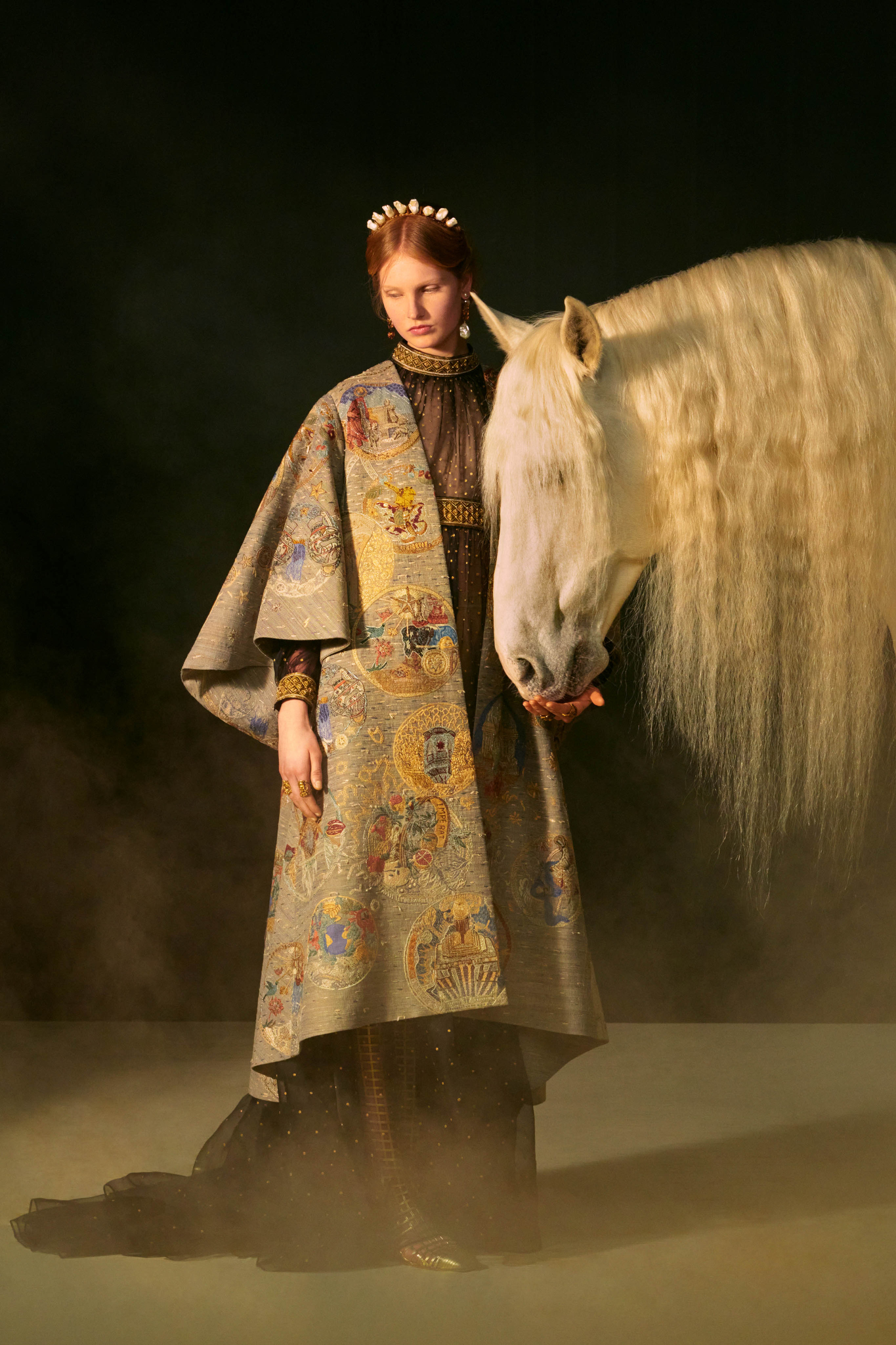 Couture ateliers in Paris are renowned for the many superstitions bred in the workplace. Among them: A piece of tulle should never hang from the ceiling, as it foretells death, for example. Spilling pins is also looked upon as a dim omen.

By contrast, wedding dresses are harbingers of good fortune. Should a seamstress prick a finger while sewing, it is viewed as good omen for the bride. Similarly, if a seamstress sews a strand of her own hair into the wedding dress, it should speed her own route to nuptial bliss.

Turbulent times seem to breed superstitious beliefs. Fashion historian Pamela Golbin noted they were prevalent around the First and Second World Wars, when Elsa Schiaparelli created an entire collection based on horoscopes, when Dior relied on his lucky number 13 and mystical guidance from Madame Delahaye, and when Gabrielle Chanel would schedule fashion shows on the fifth day of the fifth month.

She also noted that lucky symbols, zodiac motifs and talismans have reigned as motifs across the decorative arts for hundreds of years.

In 2016, the house of Schiaparelli created a contemporary version of the iconic Zodiac jacket, part of the founder’s Astrological collection for fall 1938 that was inspired by astronomy, constellations and the Sun King.

Steele noted that the color green has long been derided as unlucky in fashion, which probably stems from Victorian times, when some clothes were dyed a vivid green using arsenic, with disfiguring or deadly consequences for the wearer and manufacturer. 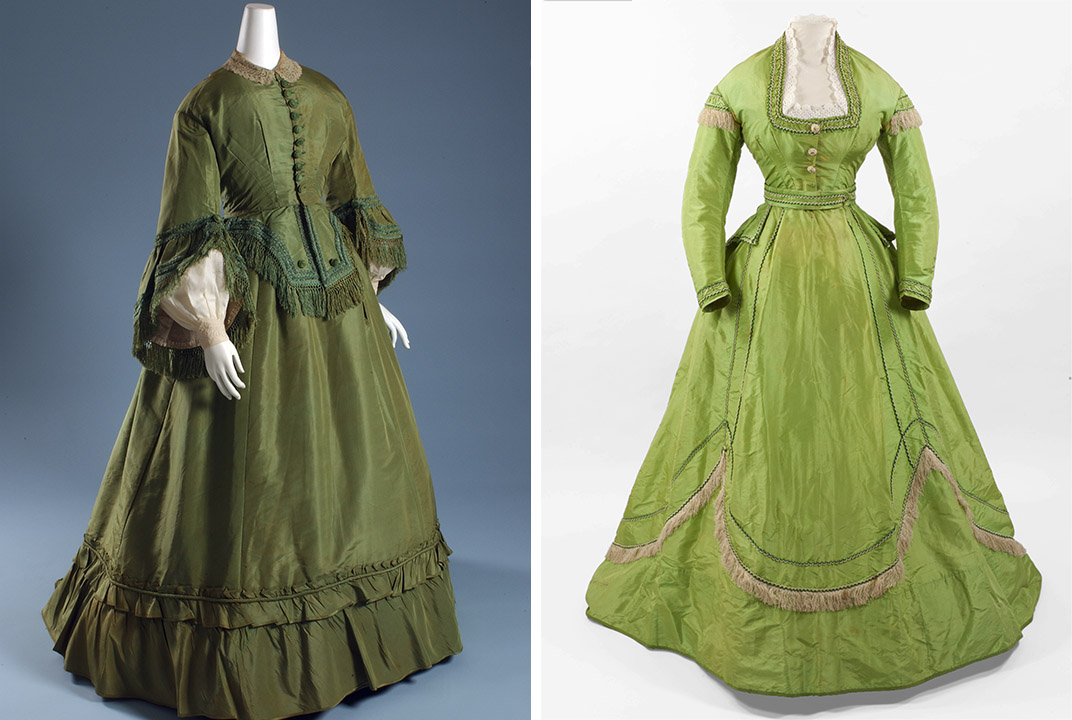 With the pandemic spurring the popularity of outdoor shows, the use of shamans to prevent rainfall may become more prevalent.

To wit: According to sources, Alaïa hired a shaman for its open-air show in Paris on July 3, and while a few raindrops fell on guests who arrived early, Pieter Mulier’s debut collection for the Paris house was showered mainly with praise.

Louis Vuitton has engaged Brazilian shaman Osmar Santos Scritori, who goes under the handle The Weather Son on Instagram, for several of its destination cruise shows, according to multiple media reports. In a rare interview with French publication Technikart, Scritori’s wife, Adelaide, also a medium, explained that when she was little, an ice storm ruined her father’s coffee plantation and “that’s where it all started.”