A SAVVY couple who were forced to miss out on a big wedding day revealed how they put the cash they saved towards buying their first home – and celebrated with a ‘first home cake’, designed to look like their block of flats.

Timi Merriman-Johnson, 31, and Jenni Hagan, 30, who first met at a wedding in 2015, originally planned to spend around £20,000 on a grand celebration with two ceremonies, two parties and more than 200 guests. 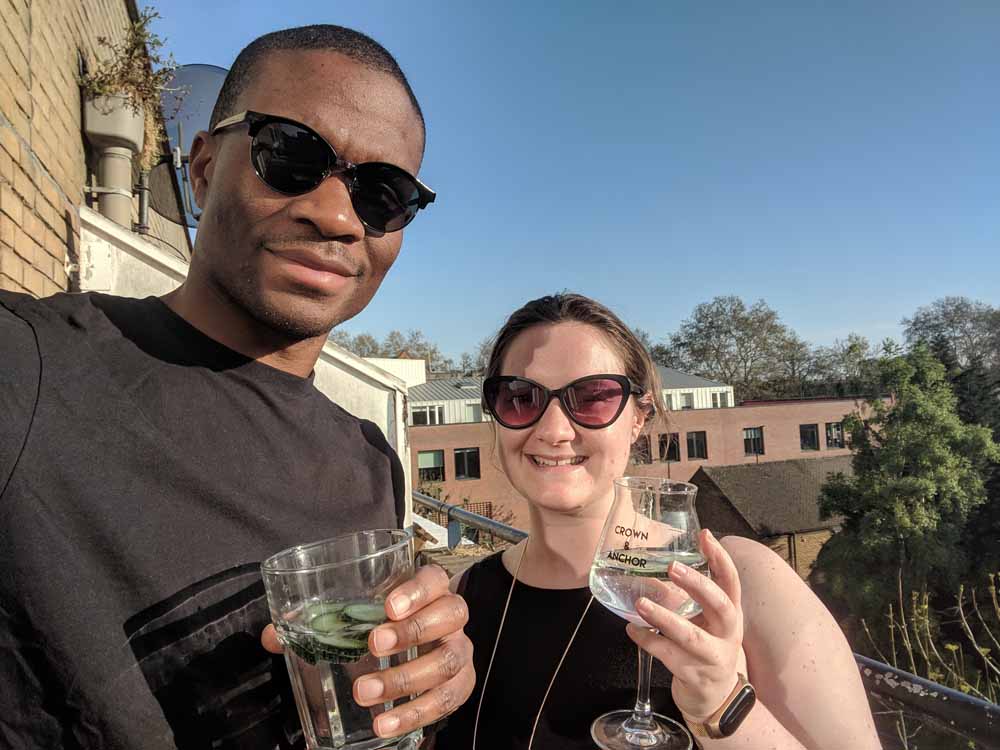 But instead, will have a small affair at a Chelsea registry office, with just 12 of their nearest and dearest this August, costing around £4,000.

The cash they saved was put towards helping them buy the flat they already shared in Southwark, south London for £465,000.

Timi, a financial content creator who goes by the name Mr Money Jar, and technology consultant Jenni celebrated their completion date with the enormous chocolate and vanilla cake.

Timi, from Croydon, said: “We were already living in the property, so we didn’t have a moving in day. But when Halifax sent the cake we celebrated the move – and it was delicious!” 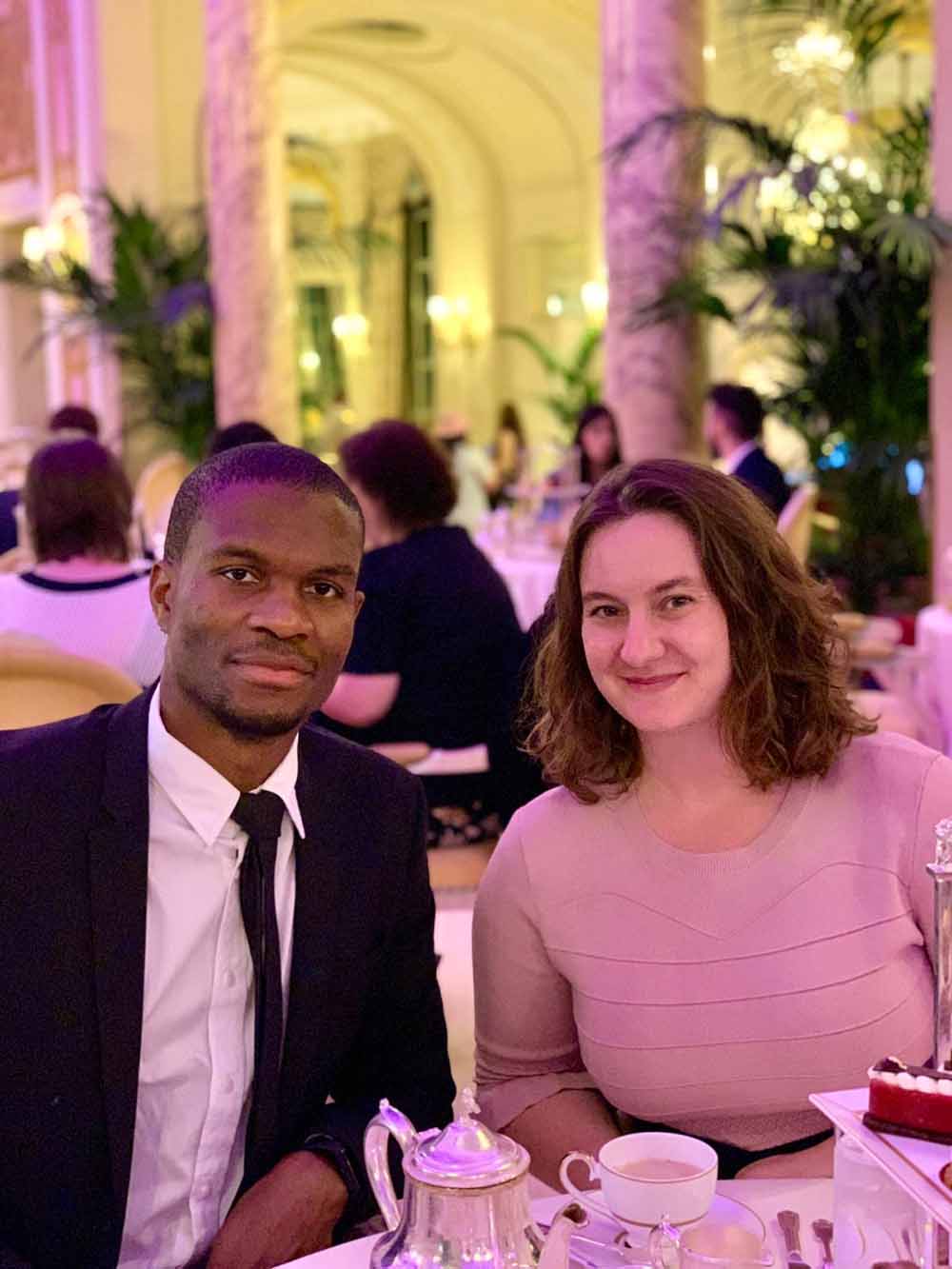 Jenni, who grew up in Dundee, Scotland, added: “Buying our flat instead of having a big wedding was much more about us making the right decisions for ourselves at the right time.”

The couple first crossed paths at their friends’ wedding in August 2015, where Timi was one of the groomsmen and Jenni knew the couple through work.

“Our friends were trying to hook us up for the whole next year,” laughed Timi.

“At the wedding, we said hello briefly but I was running around trying to sort the seating out – as an entire table had been forgotten about!”

Meeting properly in December 2016, on a night out at a bar and restaurant with mutual pals, the pair hit it off instantly. 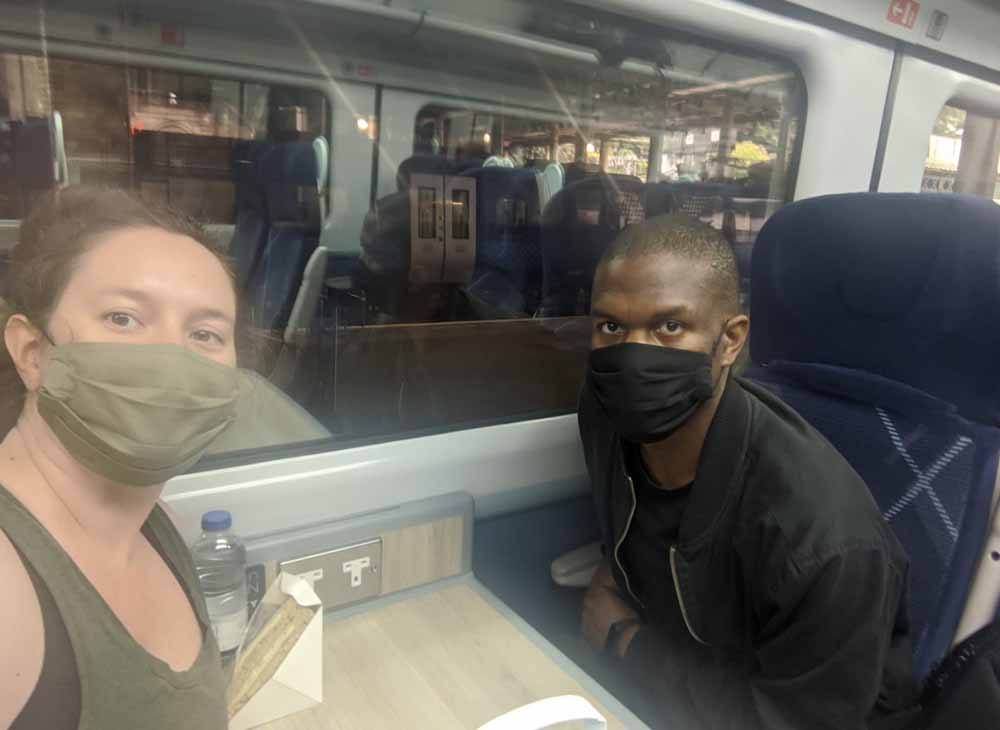 Timi said: “We went on our first date a couple of weeks later – dinner and a walk around the South Bank.

“I thought Jenni was very kind, very mature and very easy to speak to, and she found me hilarious!

“It didn’t feel like a date, just two people who’d known each other for a long time going for dinner.”

The two quickly became serious, exploring different bits of the city as they got to know each other.

“Due to the sorts of people we are, we wouldn’t have gone into it if we didn’t think it would be serious,” Timi added.

Moving in together in 2017 was a milestone for the besotted couple.

Having put aside money every month, when their then-landlady had the property valued in early 2020, they decided to approach her about buying their home. 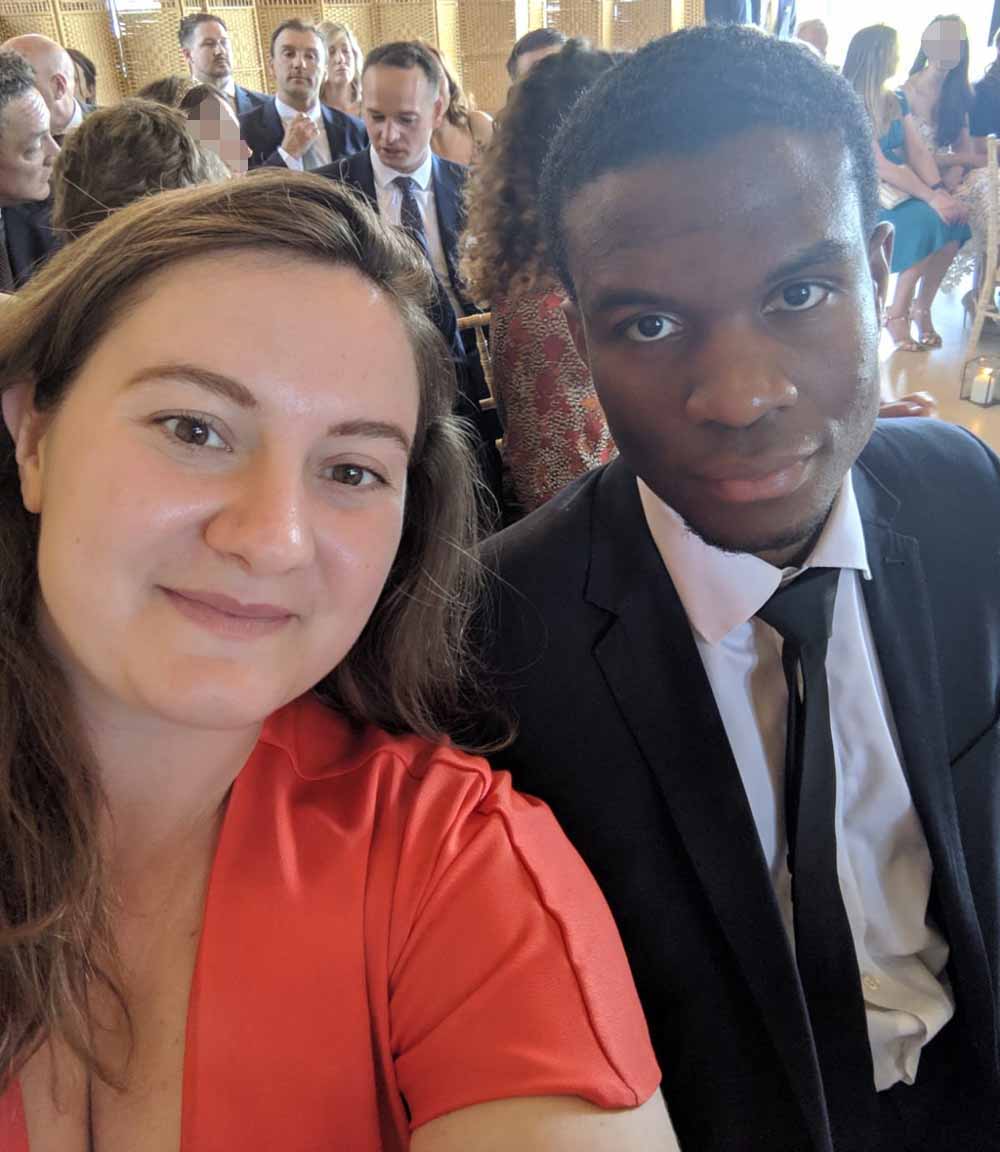 Timi said: “We first spoke to our landlady in February and told her we were a young couple trying to get on the property ladder, meaning we weren’t in a chain.”

Discussions went well until Covid hit in March – when, with the country put in lockdown, they came to a halt.

“There was that really scary period where there was no toilet paper and no eggs,” Timi remembered.

“She retreated, understandably, and banks started to pull products as well.

But, in the summer, things were getting slightly better and she came back to us and asked if we were still interested.”

Alongside their plans to buy, Timi and Jenni had discussed marriage – and carried out an unconventional proposal in September 2020. 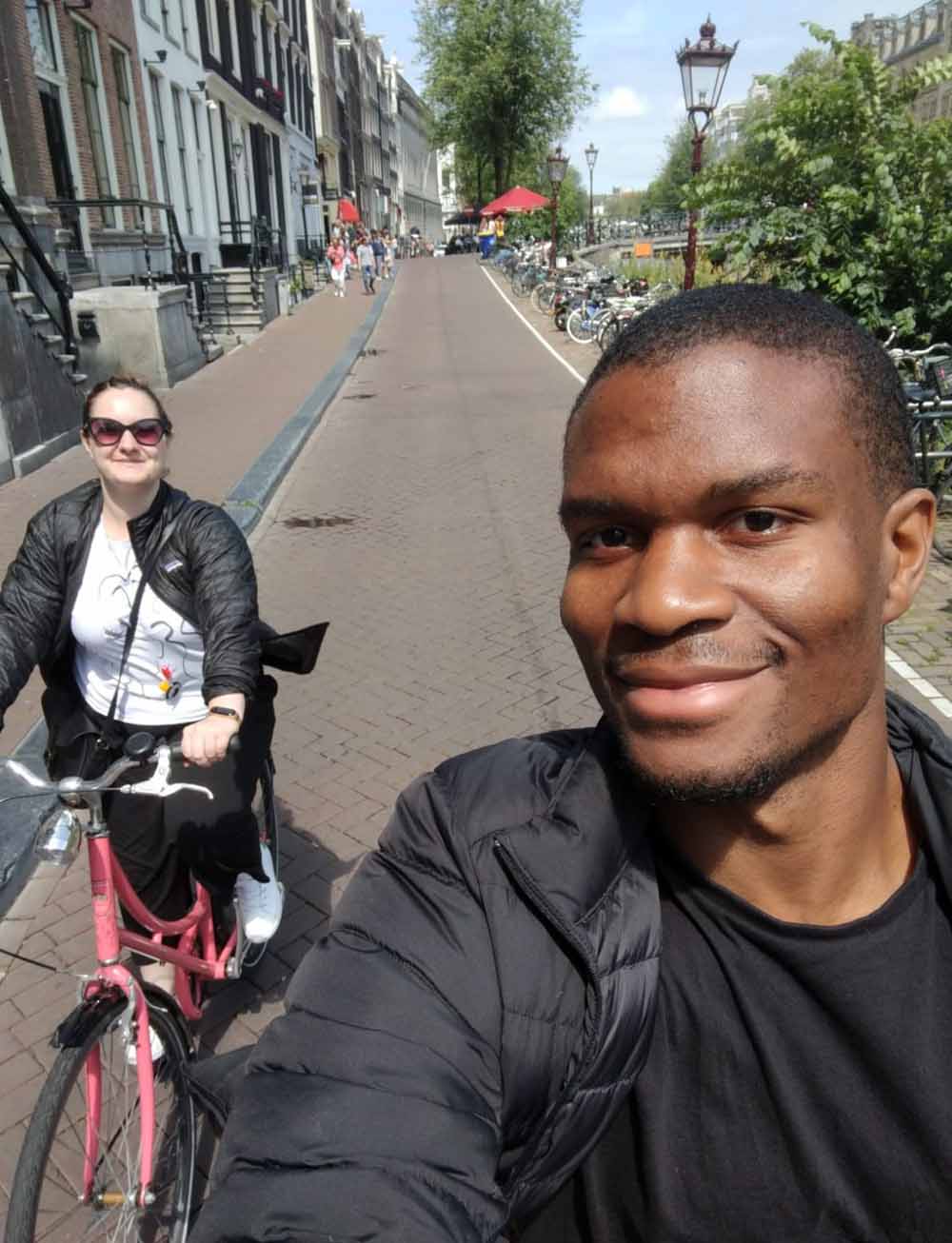 Timi said: “We knew quite early on that we wanted to be in a long-term relationship with each other.

"We’d regularly check in about how we felt about marriage and the rest of life’s milestones.

Both on the same page, the couple decided to make a family event out of the decision.

“We went to visit my mum and asked for her blessing to be married and visited Jenni’s parents in Scotland and asked them,” Timi said.

“My mum was really happy and Jenni’s parents were too, and said they were really looking forward to welcoming me to the family.” 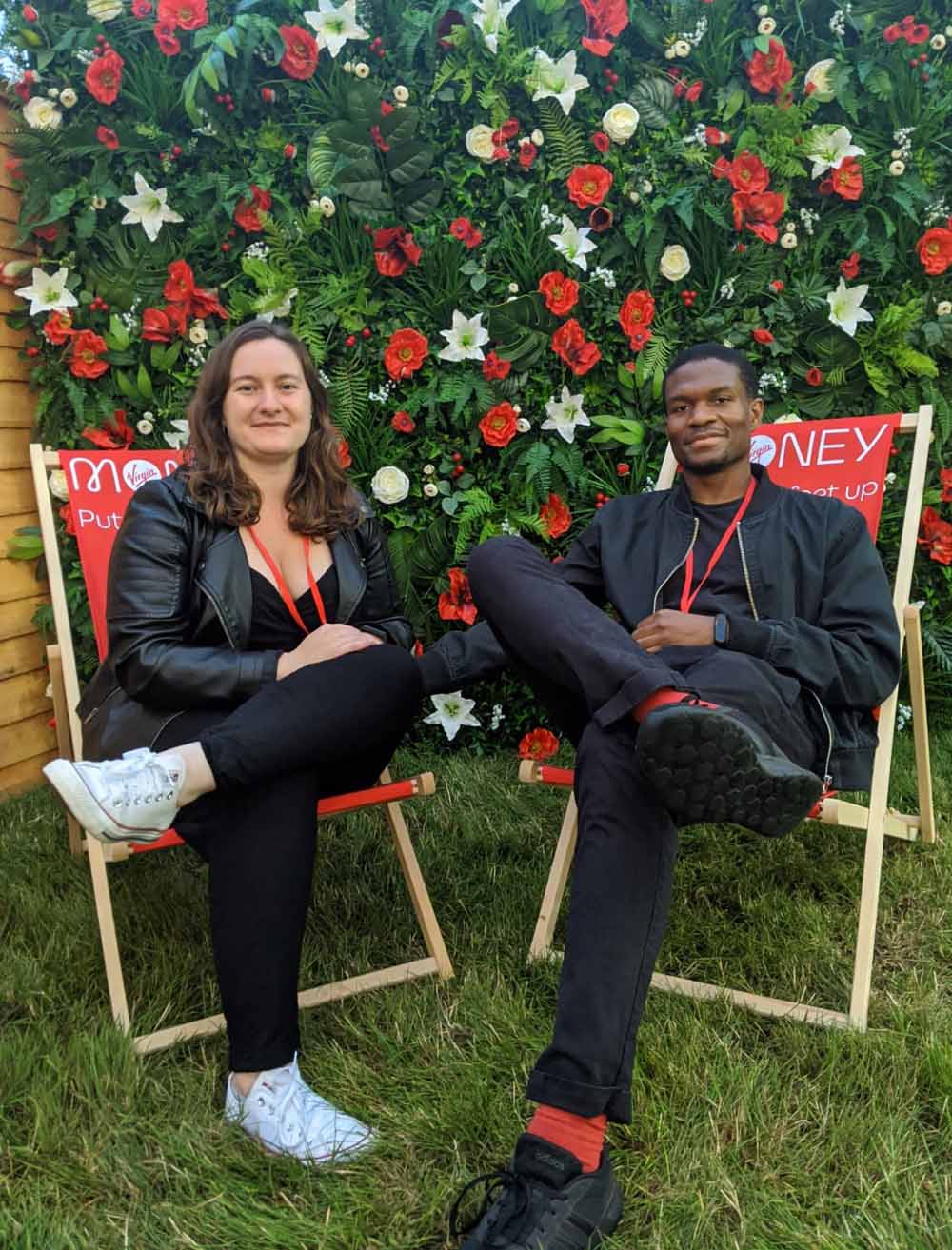 Both coming from big, tight-knit families, their first instinct was to turn their marriage celebration into a huge party, with multiple celebrations.

Timi said: “I am from a British Nigerian background and Jenni is Scottish, so we come from two cultures that love to party and dance.

“We created a spreadsheet and a conservative guest list was 200. It easily could have been 300!

“We would have had a traditional Nigerian and a Scottish ceremony – so 200 people at two events.”

But aware of the fluctuating pandemic restrictions, they then decided on a single smaller do, planned for August, 2021, with 12 of their closest loved ones gathering at a registry office, followed by a restaurant meal and drinks at a hotel. 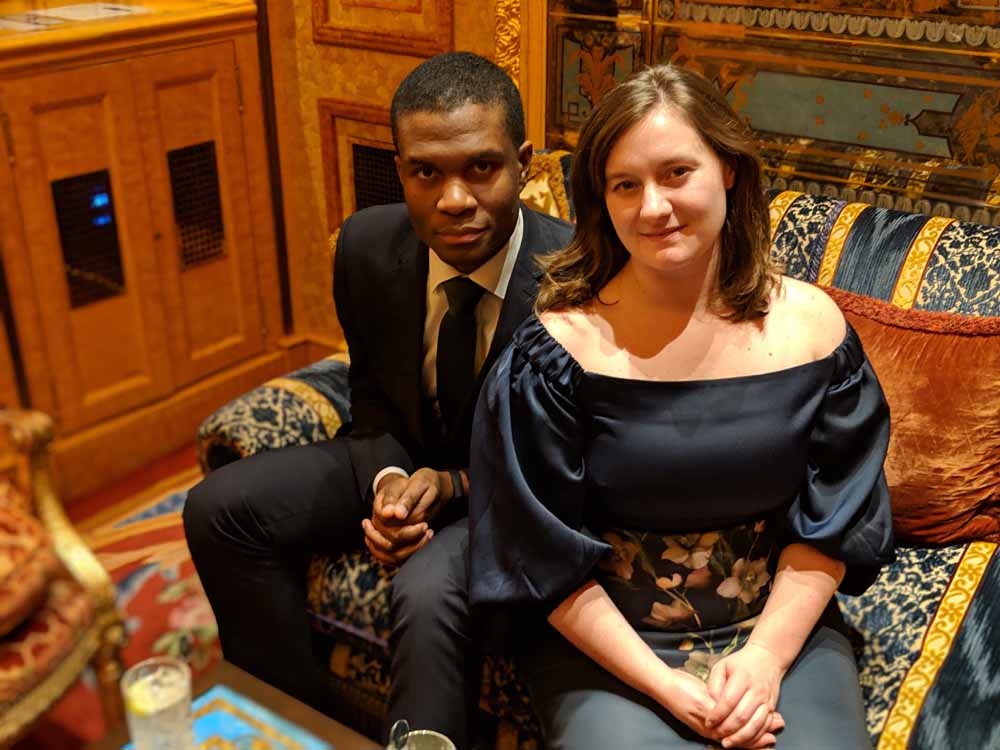 “We wanted the simplest possible plans so we knew they could go ahead no matter what happened with Covid – whether we’re green, amber, red or Tier One, Tier Two,” Timi explained.

Discussions continued with their landlady and in October 2020, they agreed the sale and were able to pay a 10 per cent deposit on the property.

Jenni said: “We had decided to buy a house first before planning a wedding of any kind. We felt the house was more important to us than having a big expensive wedding.”

“It felt like coming to the end of an eight-month marathon,” Timi laughed. “Everyone was tired – it had taken a long time!”

The cake they received from mortgage lenders Halifax was the icing on the celebration.

Delighted with the gift, Timi and Jenni even did a photoshoot with their delivery – moulded to look like their Southwark block of flats, with cake figures of themselves stood outside. 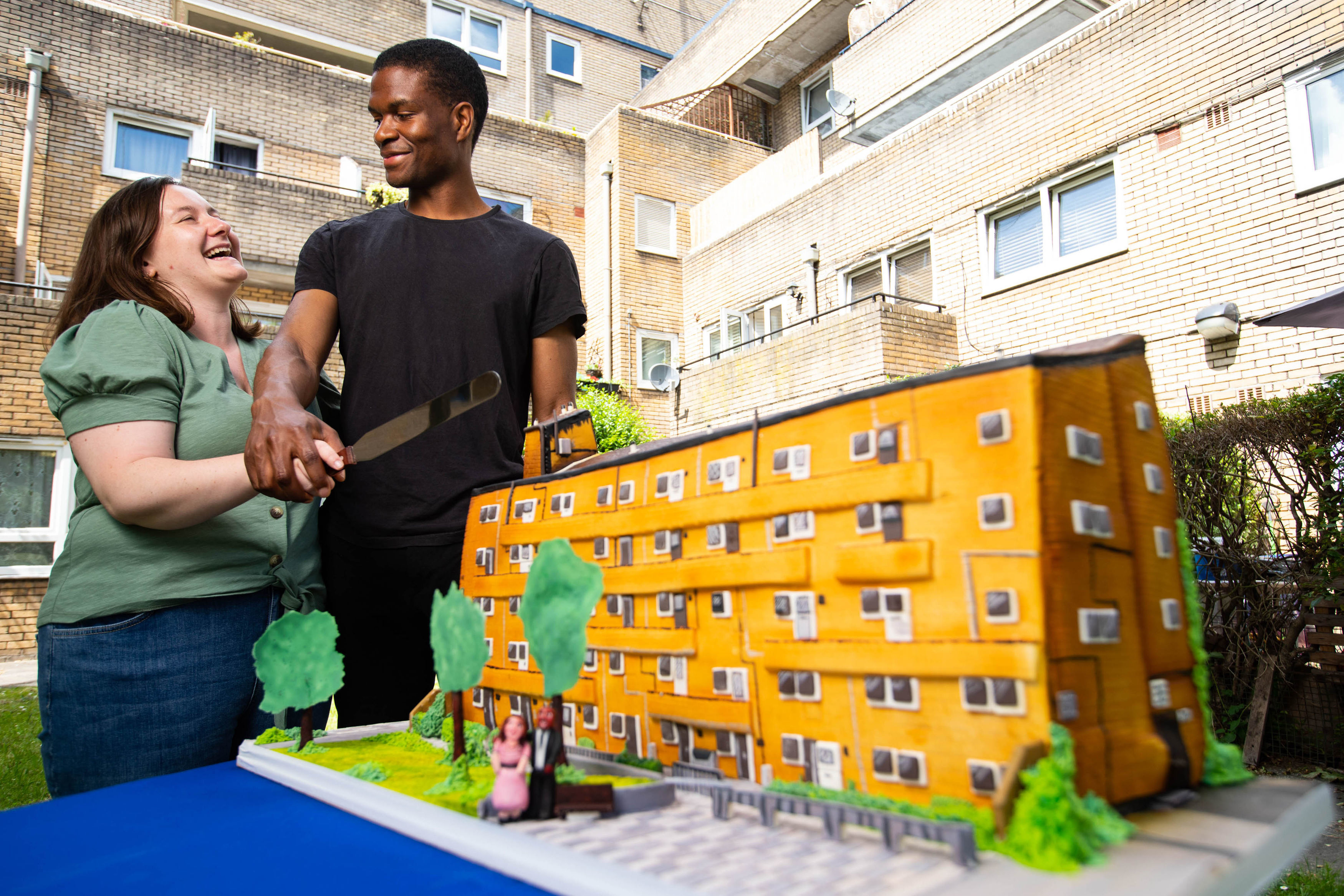 “It was a delicious chocolate and vanilla cake – we ate it and took pics of ourselves feeding it to each other,” Timi said, adding that they also shared slices of the cake with their neighbours.

He added: “We will have a wedding cake as well to share that moment with our family and friends next month – so we didn’t save any of this one in the freezer for our move-in date anniversary.”

Now the couple are busy making their new home their own and have just bought a new sofa, to add to the contents given to them as part of the sale.

Timi said: “It all happened in the middle of lockdown, so we haven’t had a housewarming party yet. 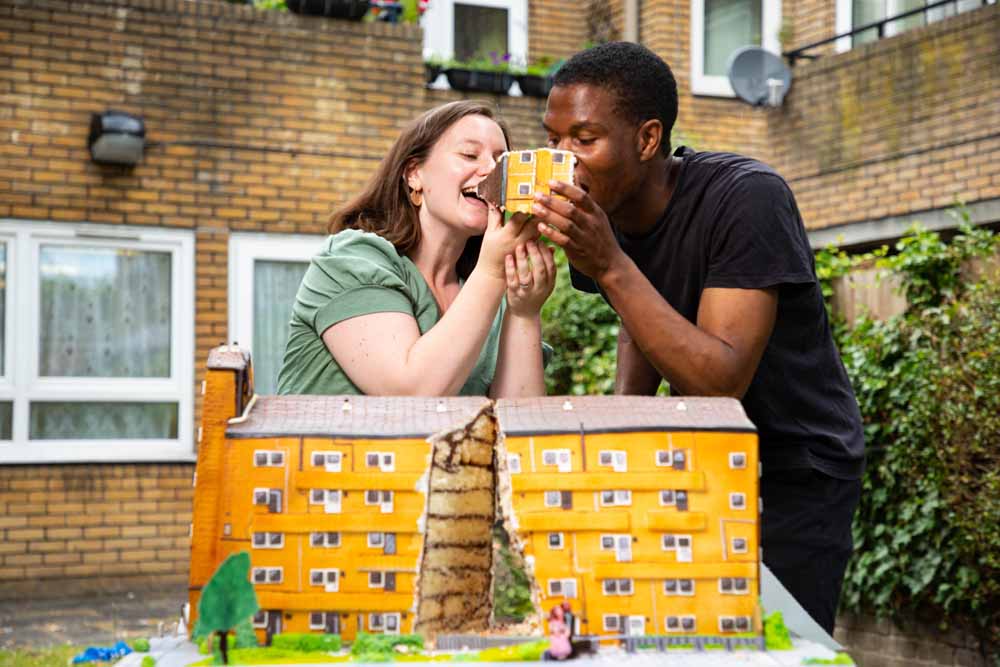 “The wedding, even though it’s small, will be a celebration of us and the house as well.

"At some point in the future, we’ll be able to look back over the past year and pop that bottle of champagne.”

While Jenni said: “Covid didn’t go away when it was supposed to, and we didn’t want to keep rearranging our wedding plans.

The Bake King, Ben Cullen, said: “I’ve created thousands of larger-than-life cakes for a variety of occasions but buying your first home is a unique moment that deserves the ultimate celebration.”

Research from Halifax shows that nearly two-thirds (64%) of couples say owning their home is a bigger priority than getting hitched.

To help couples celebrate getting their first home and give them their own cake-cutting moment, Halifax has teamed up with extreme cake maker Ben Cullen, known as The Bake King, to create larger than life first-home cakes.

My ex hid where he lives to avoid paying child support – so I catfished him, got his address & now he has to pay $23k.

‘Entitled’ bride savaged for rude note banning people from public camping ground so she can use it to marry.

I’ve won £18k in prizes & five-star holidays by entering up to 100 competitions a DAY – here’s how you can win.