PARIS – Guests arriving at the Dior showroom this season had to make their way through a gaggle of kids thronging the pavement: fans of Travis Scott, who was in the building to put the finishing touches on the spring 2022 collection he designed with Dior’s artistic director for men’s wear Kim Jones.

It was just the latest in the multi-hyphenate’s winning streak of collaborations with companies as diverse as Nike, Dover Street Market, McDonald’s, Playstation, Epic Games and Byredo. For Dior, the partnership marks the first time it has created a full collection with a musician.

The line was due to be unveiled today in Paris with a physical runway show on a set that summed up the spirit of the collaboration: a desert-like backdrop covered in oversized blooms inspired by founder Christian Dior’s garden, and cacti symbolizing the musician’s home state of Texas and his creative collective Cactus Jack.

Scott said the mood was influenced by working on the highly awaited sequel to “Astroworld,” his bestselling album from 2018. “I’m in this new album mode where it’s like psychedelic rock,” Scott told WWD. “So even just like the field of cactuses and mushrooms, you might get tripped out.”

Scott and Jones have known each other for a while, and grew closer last year, when the rapper became the unofficial face of the Air Dior capsule collection that the French fashion house developed with Jordan Brand.

“It’s just an amazing relationship, just connecting. He always knows what he wants to do, and I’m kind of like the same way,” Scott said. The two spent six months working on the collection, which includes a new take on the Dior Oblique logo that spells out the word “Jack,” as well as a Western-style double Saddle bag with a stirrup handle.

Scott said he was particularly into the tailoring, having worn a Dior suit to the 2019 Met Gala and other events – and he was impressed with the house’s speed of execution.

“Way quicker than what I thought. You know, any experience when I was younger, trying to get, like, a pair of pants took me a f—ing month. You come to a house and it’s just like, ‘Yep, tomorrow.’ It’s like, ‘Whoa!’” he said with a laugh.

“We tried all different types of silhouettes, taking it somewhere that I usually don’t even go with my own clothing,” he continued, referring to a silhouette of a narrow jacket with flared pants. “We produce more street style things, so to come into a house that does more couture-level, and kind of mesh, it was kind of cool.”

Still, there are plenty of casual options in the lineup, with motifs ranging from Cactus Jack’s signature hand-drawn graphics to rattlesnake prints, and plenty of cowboy-style brown leather.

“I just tried to take some of the textures of what you might see in my backyard on an everyday basis,” Scott explained. “I wanted to make something that felt like you can wear it on the street every day, but it still has some type of way that you can wear it in and out of a major building, or to the bodega – so we just took that journey.” 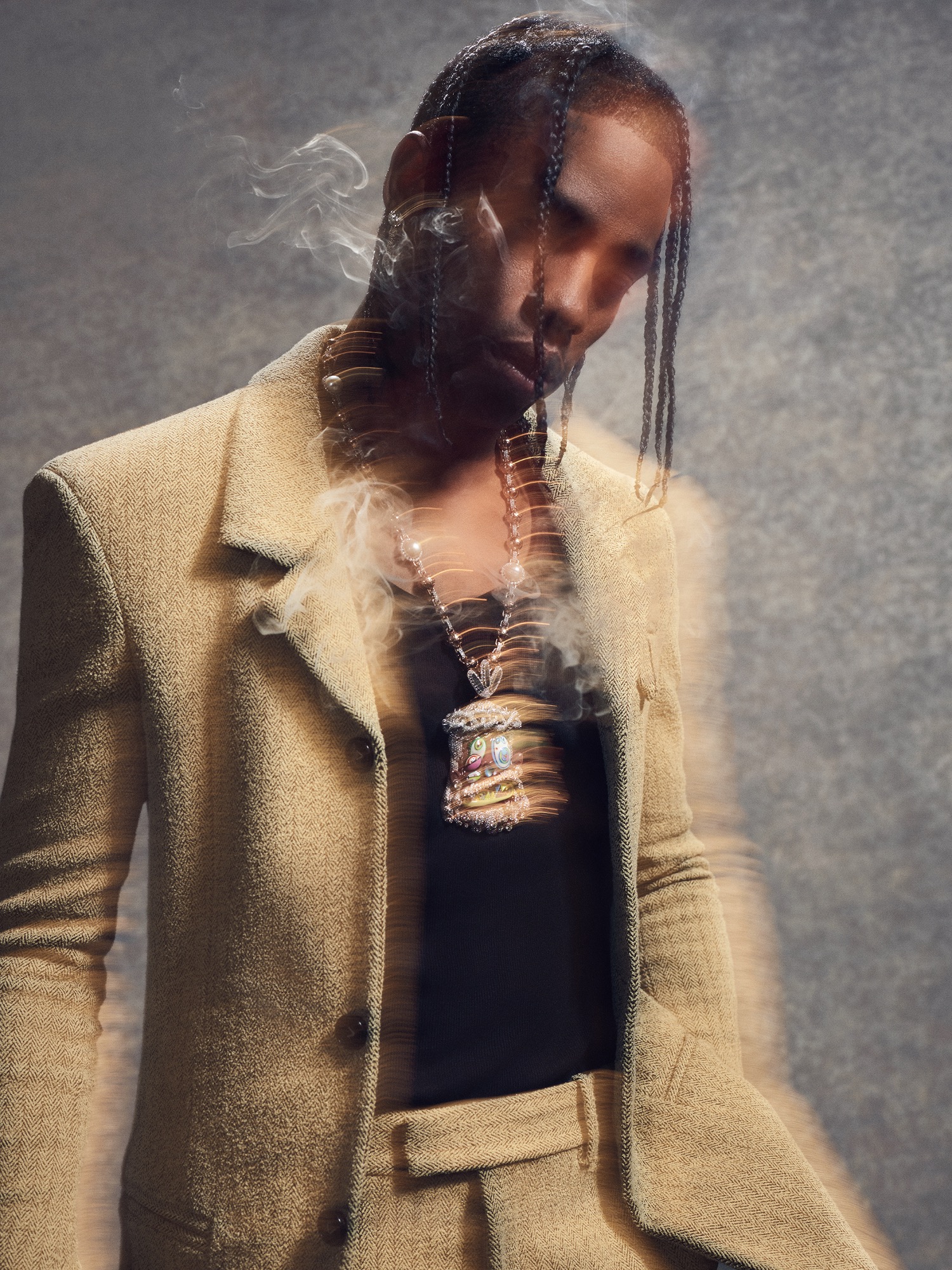 Scott said his high-low approach comes naturally. “High-end, and even couture, has always even been in my metaverse of things I like. And I don’t think there’s even a difference going from McDonald’s to Dior. It’s just the things that I like in my natural state,” said the singer, rocking a cactus-shaped pendant studded with diamonds.

“Way too many – enough to blind it out. Probably to count, we’d be here all day,” he said of the necklace, the first custom piece for men designed by Victoire de Castellane, Dior’s creative director of fine jewelry. For the record, it features 2,219 diamonds – in addition to six emeralds and 34 pearls.

Scott has appeared in campaigns including Saint Laurent’s spring 2019 ads, and this week featured in the second issue of Bottega Veneta’s quarterly digital journal. Earlier this year, he launched his Cacti seltzer brand.

He’s also been lauded for his innovative music marketing strategies, such as bundling concert tickets, merchandise and a new album, and staging a virtual concert within Epic’s wildly successful “Fortnite” game. Jones said the performer has a unique ability to speak to young consumers.

“I see things that Travis does, that other people don’t do, that interest me. He’s a leader, not a follower, and I think that’s always really important. You cross different sections of society. The fact that he can do Dior and McDonald’s is testament to him – no one else could,” he said.

As part of the collaboration, Dior will auction off four white shirts hand-painted by artist George Condo to benefit the fashion program created in partnership between Scott’s Cactus Jack Foundation and The New School’s Parsons School of Design.

“That was one of the things that really got me into wanting to do this with Travis, because he understands, like I do, that we need young people to go through the system to be trained to fulfill their dreams,” Jones said.

Scott was among the honorees this month at the annual Parsons Benefit, attending with his on-again, off-again partner Kylie Jenner and their daughter, Stormi. He noted there is a philanthropic element to most of his business ventures.

“I always try to figure out any moment where we can use whatever comes from this to literally try to give back to people that really need this stuff. I launched this foundation with Parsons to help kids in Houston to attend that school,” he said, noting there is a strong pool of talent in Texas.

“There’s way more creatives there. If they had the opportunity to experience these programs, get out their creative ideas, have a viewing for it, it would be amazing. So trying to take this money and fuel these people to bring them more to light, that’s like the super drive behind this whole thing,” he explained.

Up next is his “Astroworld” festival, due to take place in Houston on Nov. 5 and 6.

Dior Teams Up With Sacai on First Co-branded Collection