FEATURE walls are showing no sign of going out of fashion, but you might have worried that adding one to your home would cost a fortune.

But as this mum proves, a cool urban-style feature wall can bring a transformative update to your home – and it only cost £12. 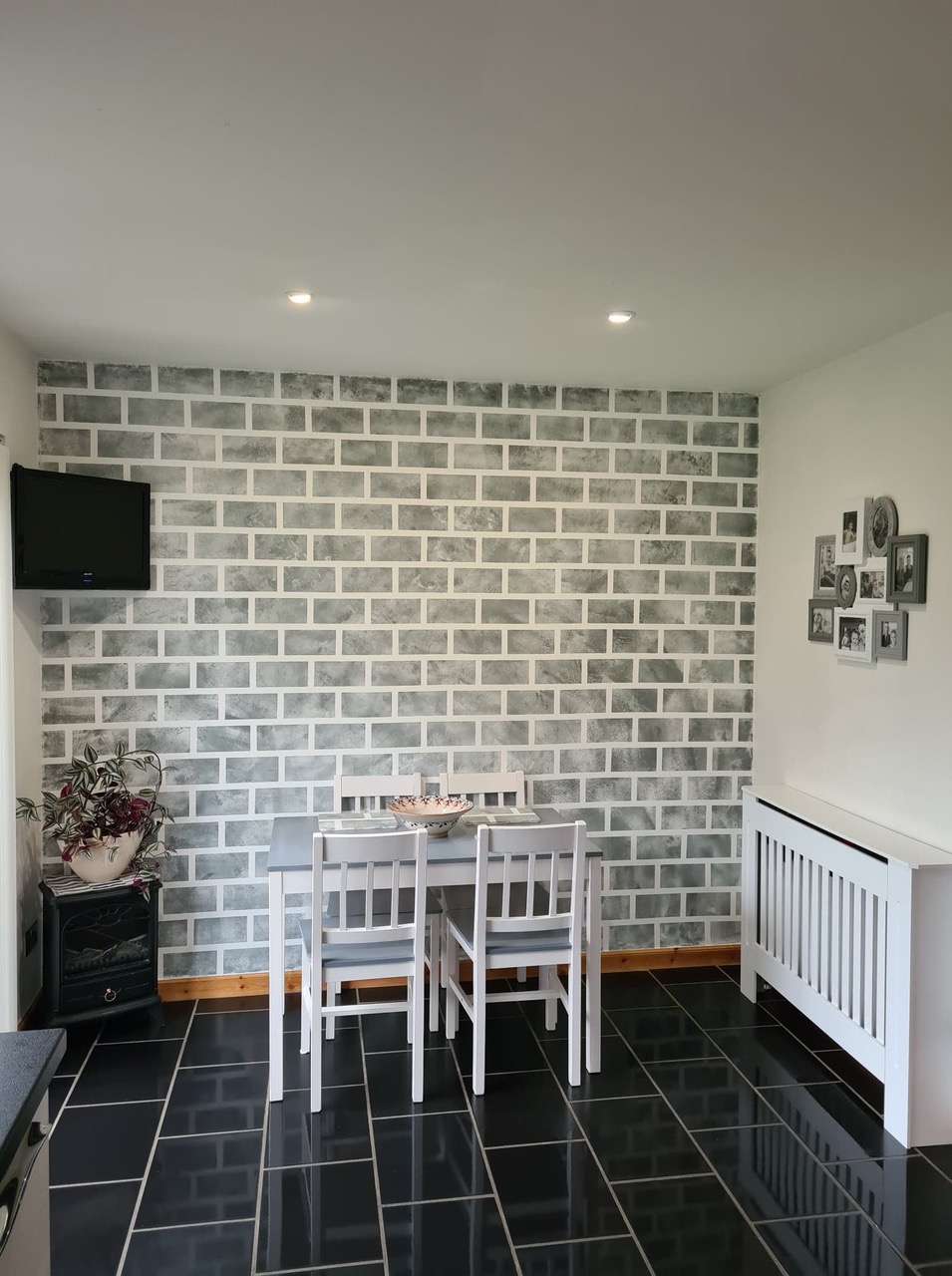 Victoria McIntyre, 33, a neurological nurse and mum of two from Perthshire, wanted to brighten up her kitchen.

She used £12 of frog tape and paint to add a modern brick-effect wall and it looks fantastic.

Victoria told money-saving community LatestDeals.co.uk: “I've just returned to work from maternity leave so carrying out DIY projects during lockdown with a small child and a baby has definitely come with its challenges.

"My husband was working from home throughout lockdown so getting stuck into redecorating at night times felt somewhat like an escape from the madness. 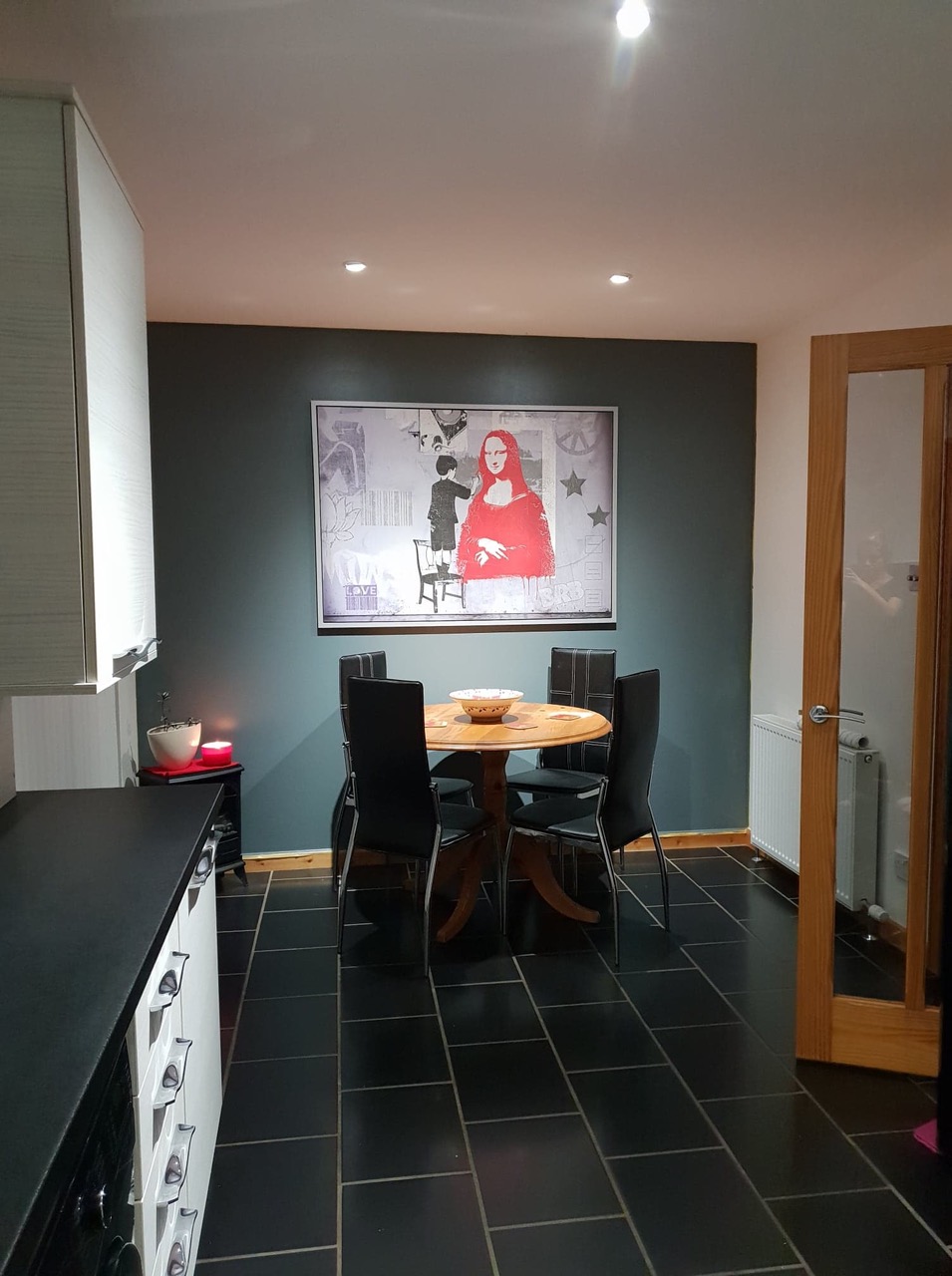 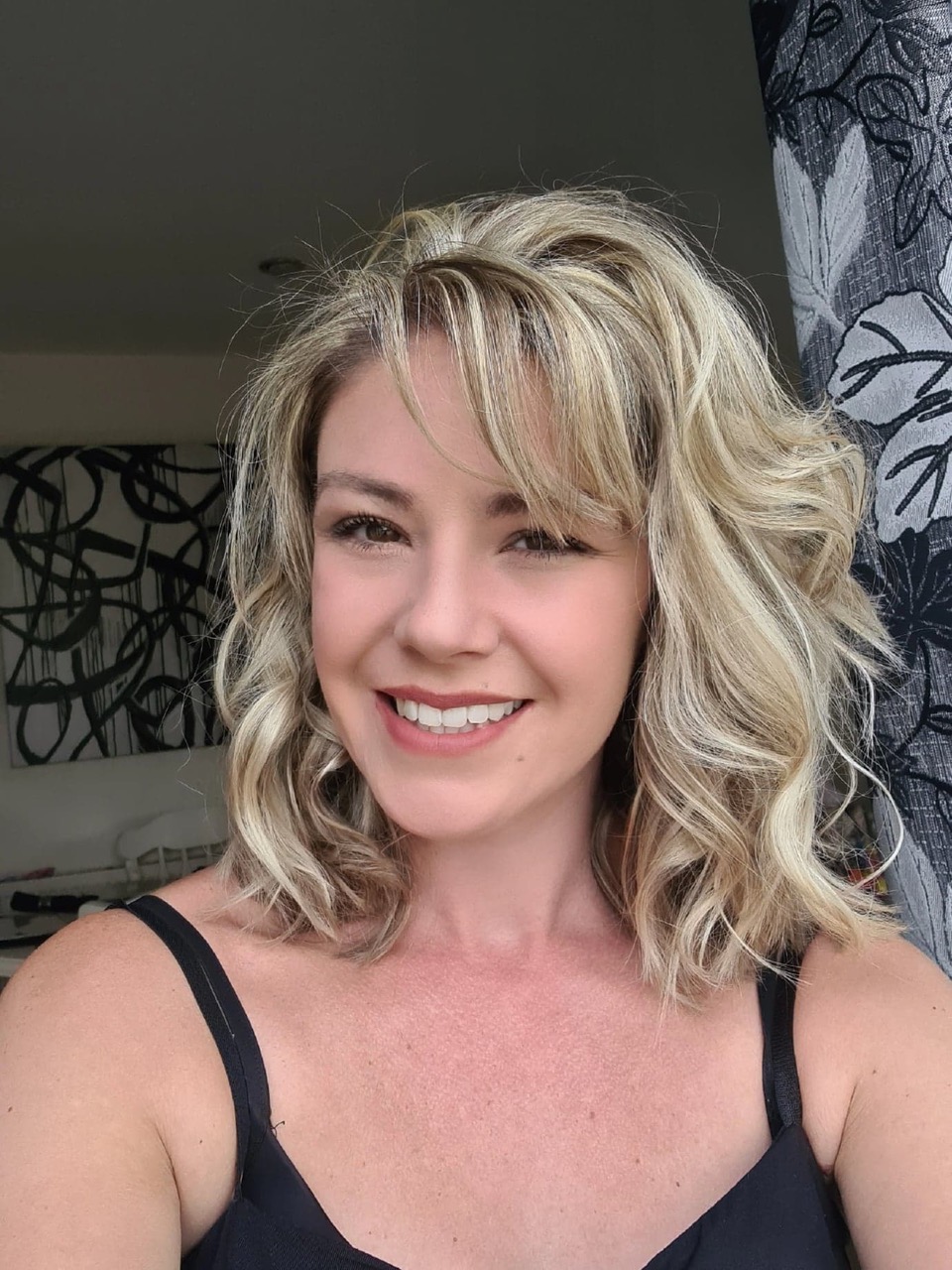 "Myself and my husband came up with this idea to brighten up our kitchen after I had already transformed three bathrooms.

"We liked the idea of using frog tape but wanted to try something different other than your typical geometric walls which are very popular right now.

"We could have achieved a similar effect from using wallpaper, however, we are not a massive fan of wallpaper as it's not as easy to simply change when you decide on a new colour scheme, and of course it would have been far more expensive.

"We have a brick tile splashback throughout the kitchen so we decided if we were to do a brick effect wall we would prefer if the ‘bricks' were the same size as those in the kitchen. That's where things got a lot more complex!

"The feature wall was a deep grey so that needed a few coats of white as a base coat prior to any frog taping being applied. 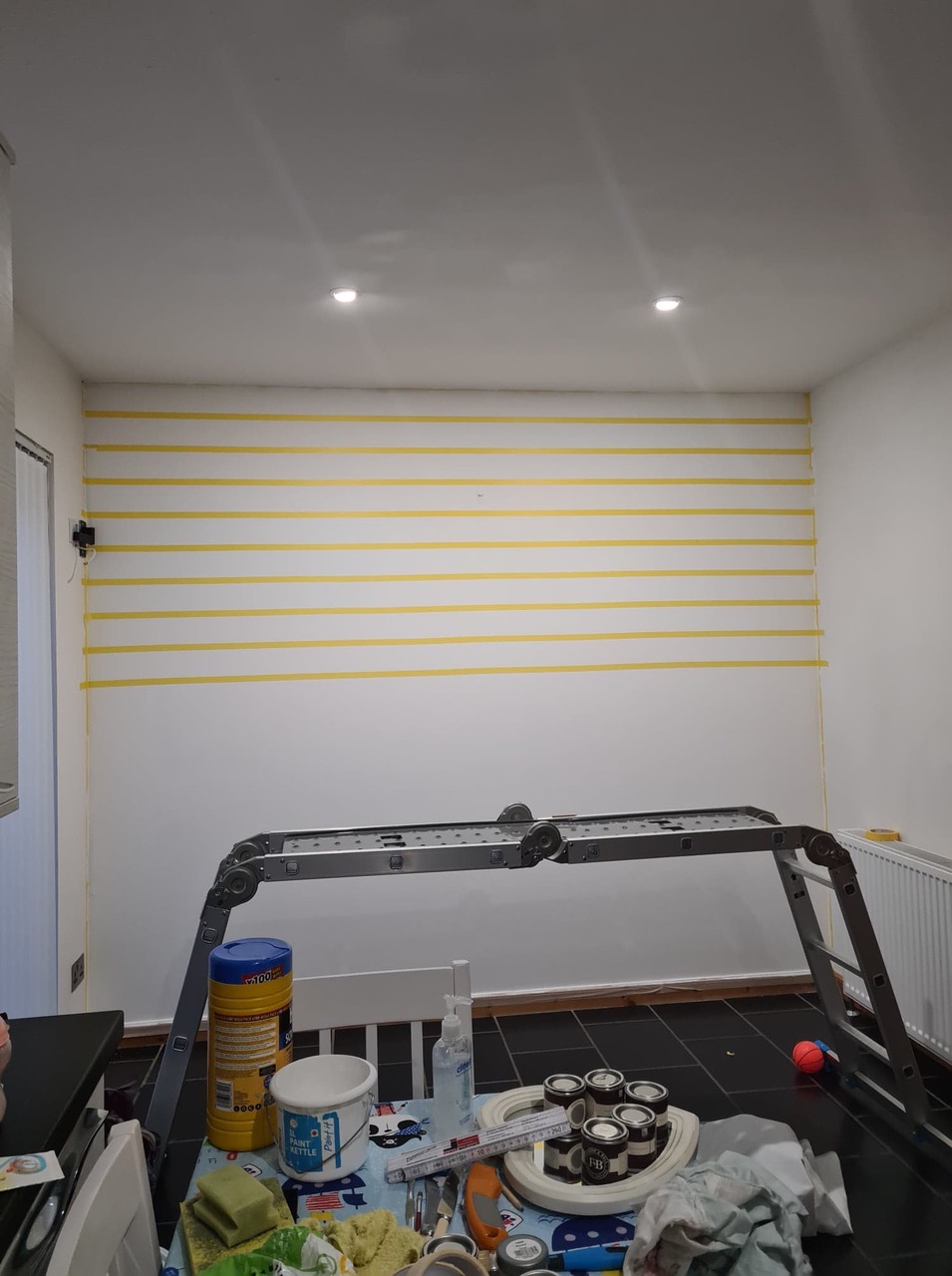 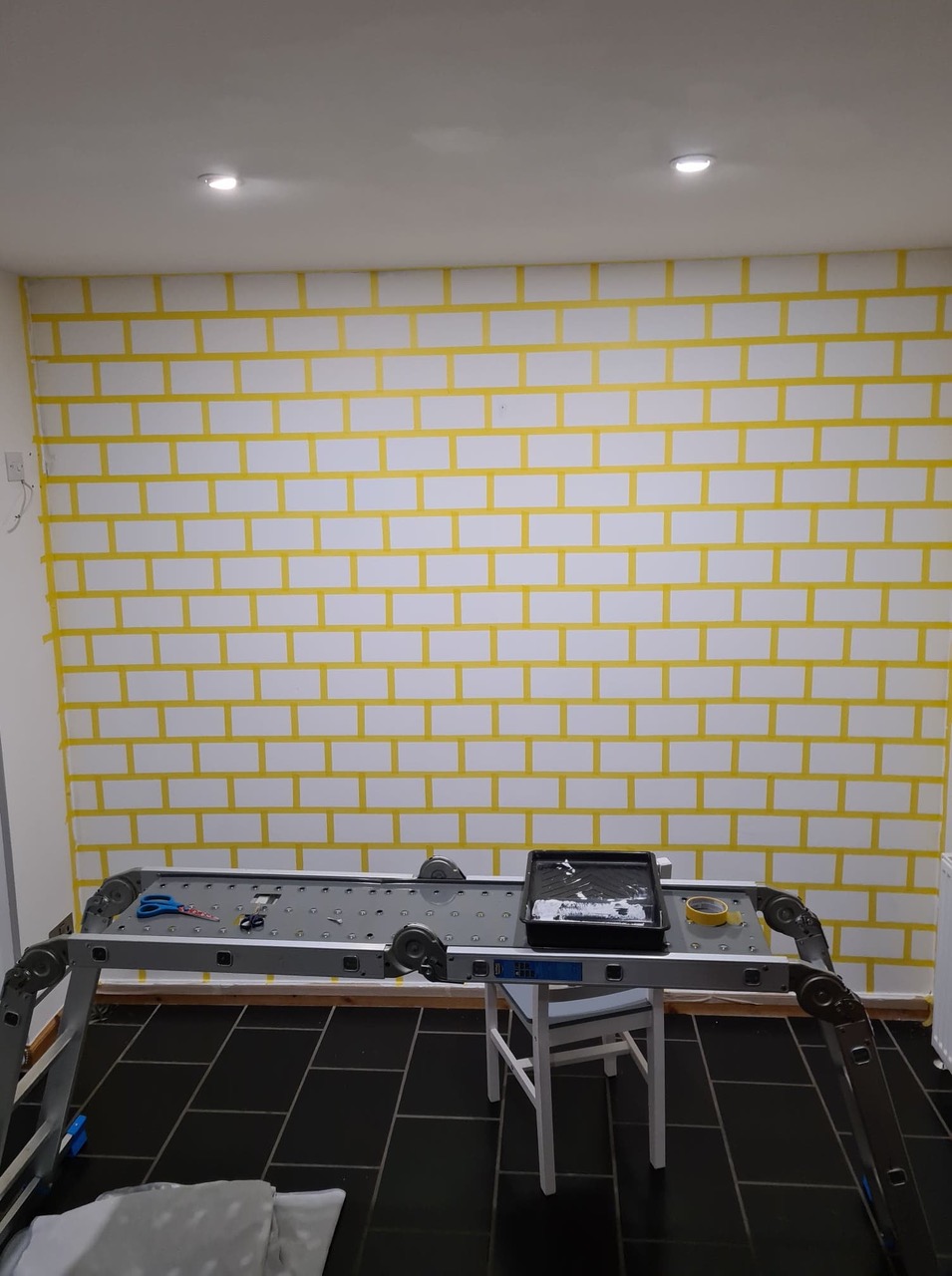 "I initially thought it would be a case of frog taping off horizontal lines along the white wall but quickly discovered the walls were slightly off, despite this being a new build house.

"Each horizontal line had to be added to the wall using a measuring tape and spirit level. This is well worth taking your time with as if the lines are off even a by a few millimetres you will end up with a wavy effect rather than brick effect.

"The vertical lines were added one by one using a spare wall tile we had. It took six hours of frog taping, only 10 minutes of painting it and about 40 seconds removing all that frog tape.

"To achieve the brick effect I simply drizzled our grey paint into a paint tray and using a deep fluffy roller I ran it through the paint with very little pressure so we never absorbed too much paint on the roller. 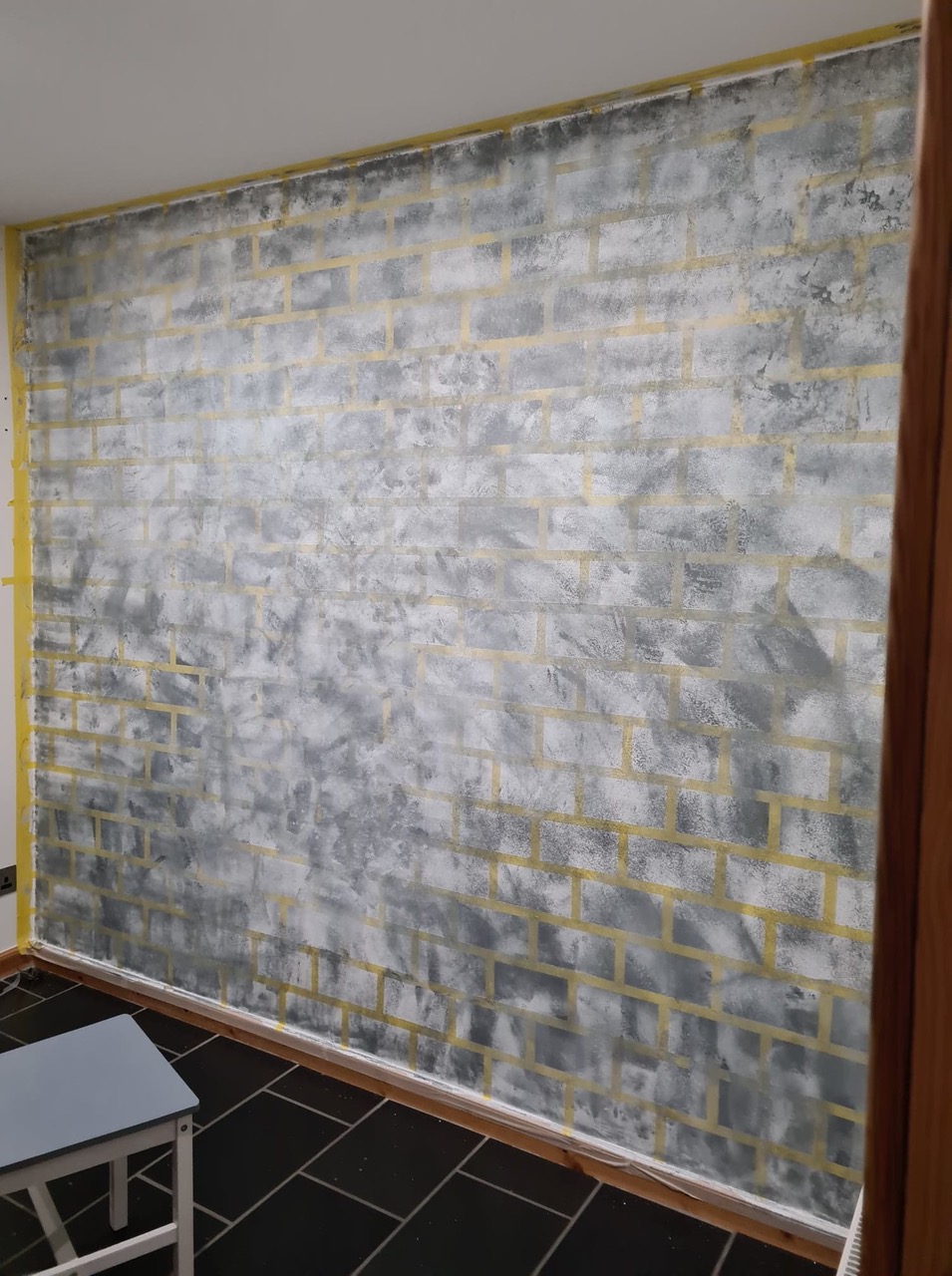 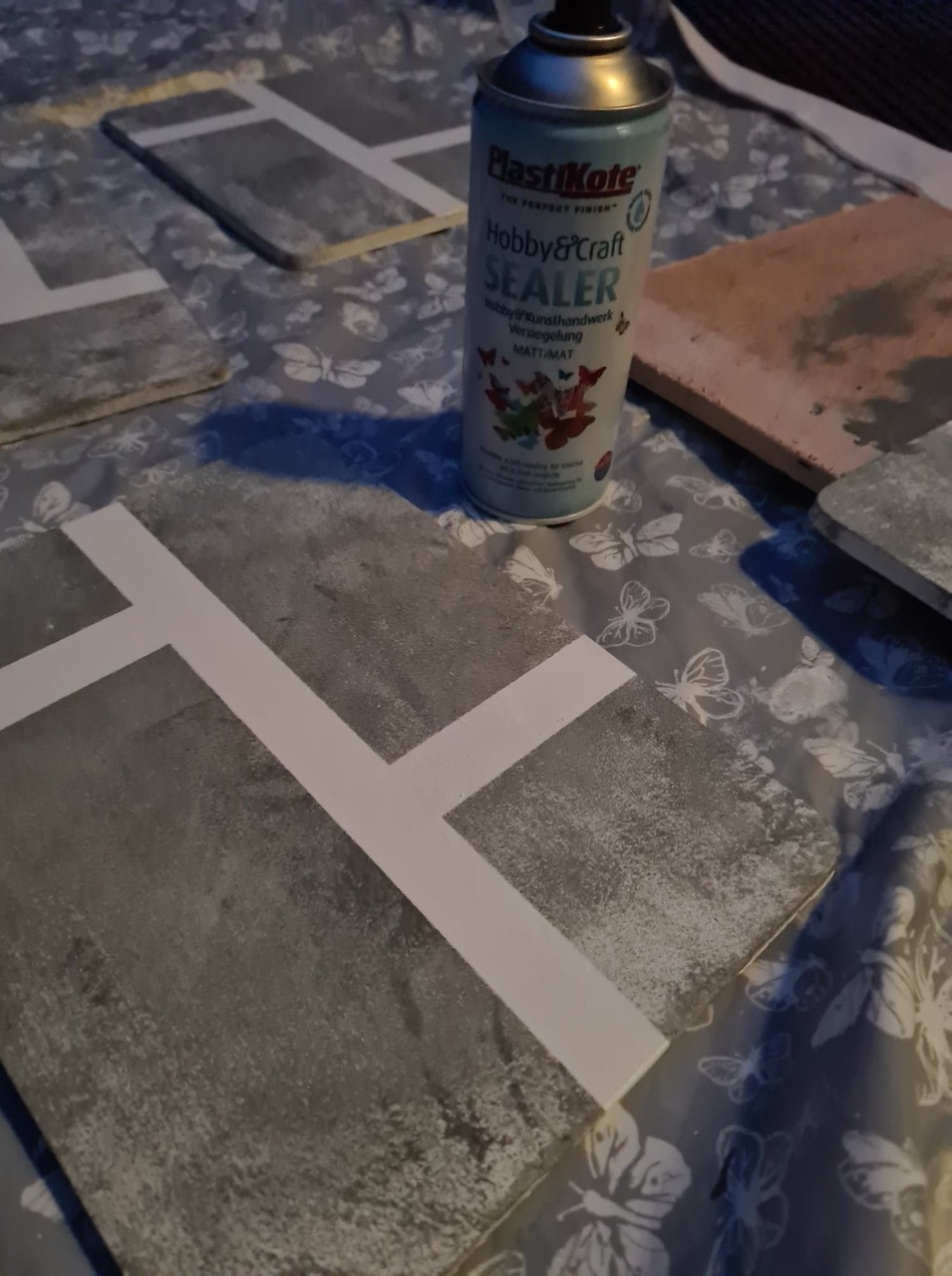 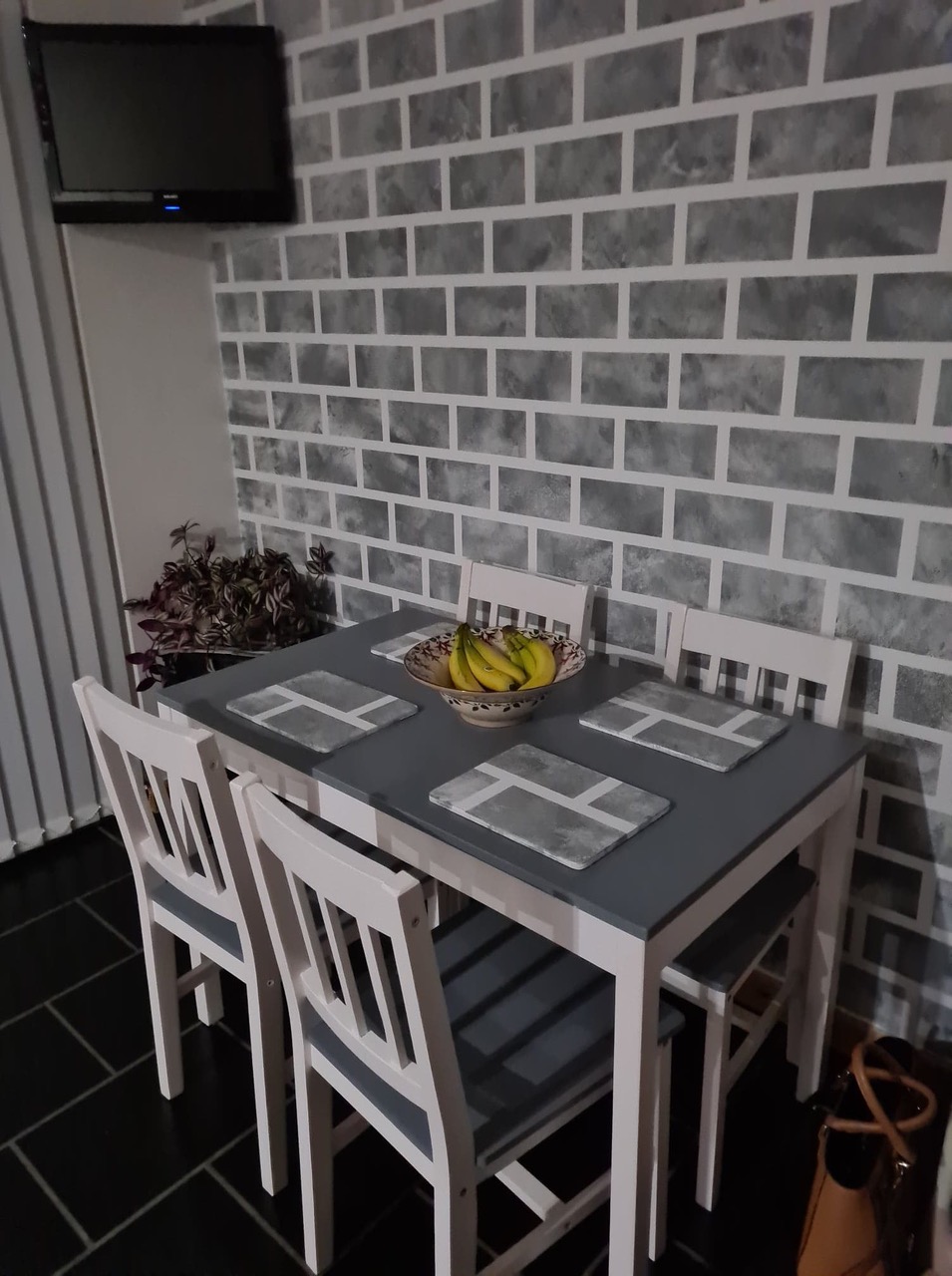 "We then very firmly ran it back and forth over the entire wall. We utilised a natural sea sponge for the edges to fill the gaps where the roller could not reach.

"The aim was to cover the entire wall with as little paint as possible to create an almost porous effect to mimic that of your typical brick.

"We already had plenty of white paint at home so to achieve the whole look it only cost me a total of £12. 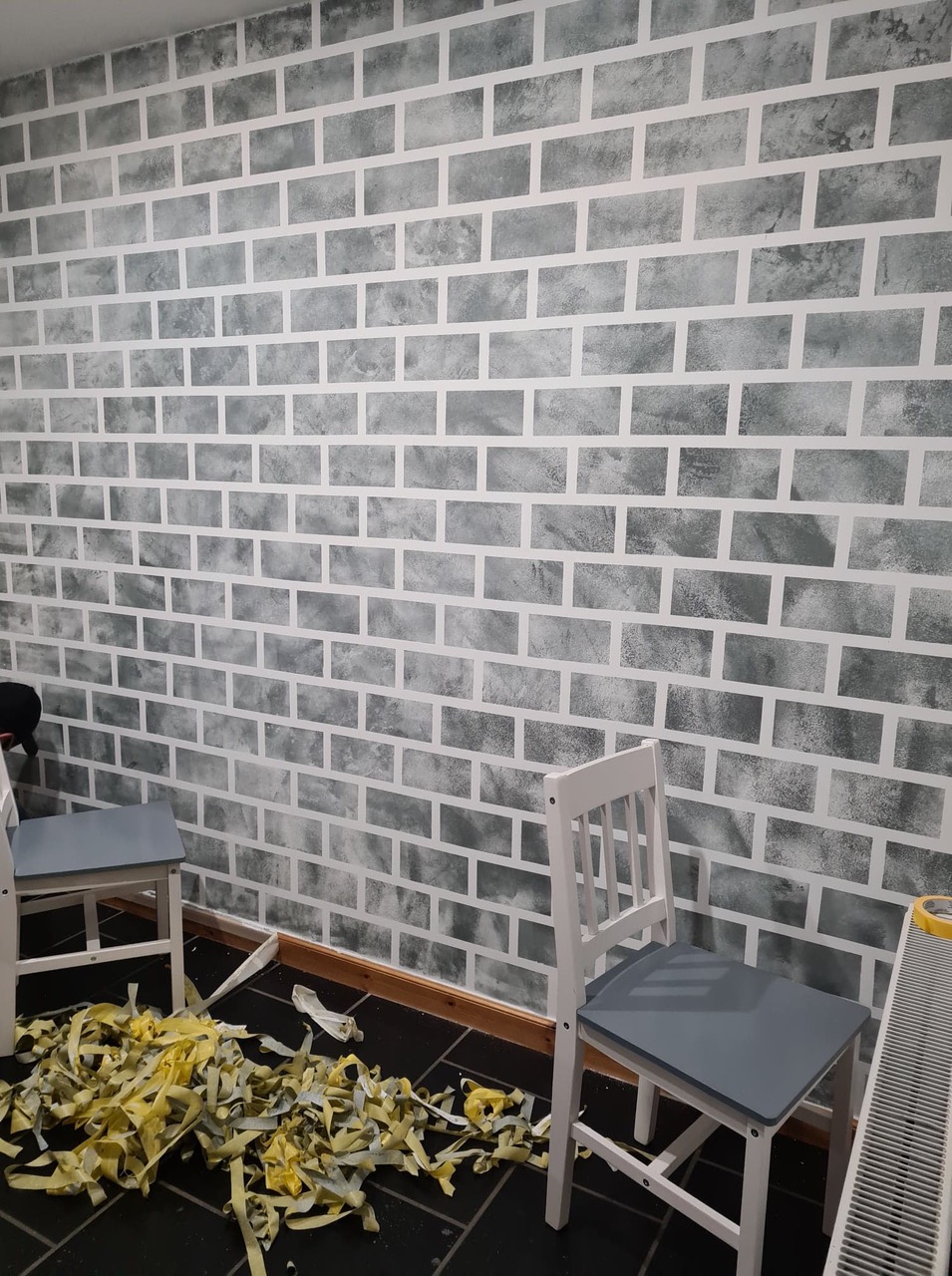 Victoria was delighted with the finished result of her project and says the brick wall brings a unique flair to her kitchen.

"I was absolutely thrilled by how it turned out in the end,” she adds.

“There was a point right before we pulled off the frog tape where my husband and I thought 'oh no, if this looks ridiculous we have no choice but to paint over it in solid grey', but fortunately enough we both loved it.

"We both think it adds a unique look to the kitchen.

"The greatest thing of all was it only cost me a total of £12. I hadn't thought about the cost much before starting but I would never have expected that it would only cost that!

“I then figured that if it was a total disaster then at least it wasn't an expensive one! 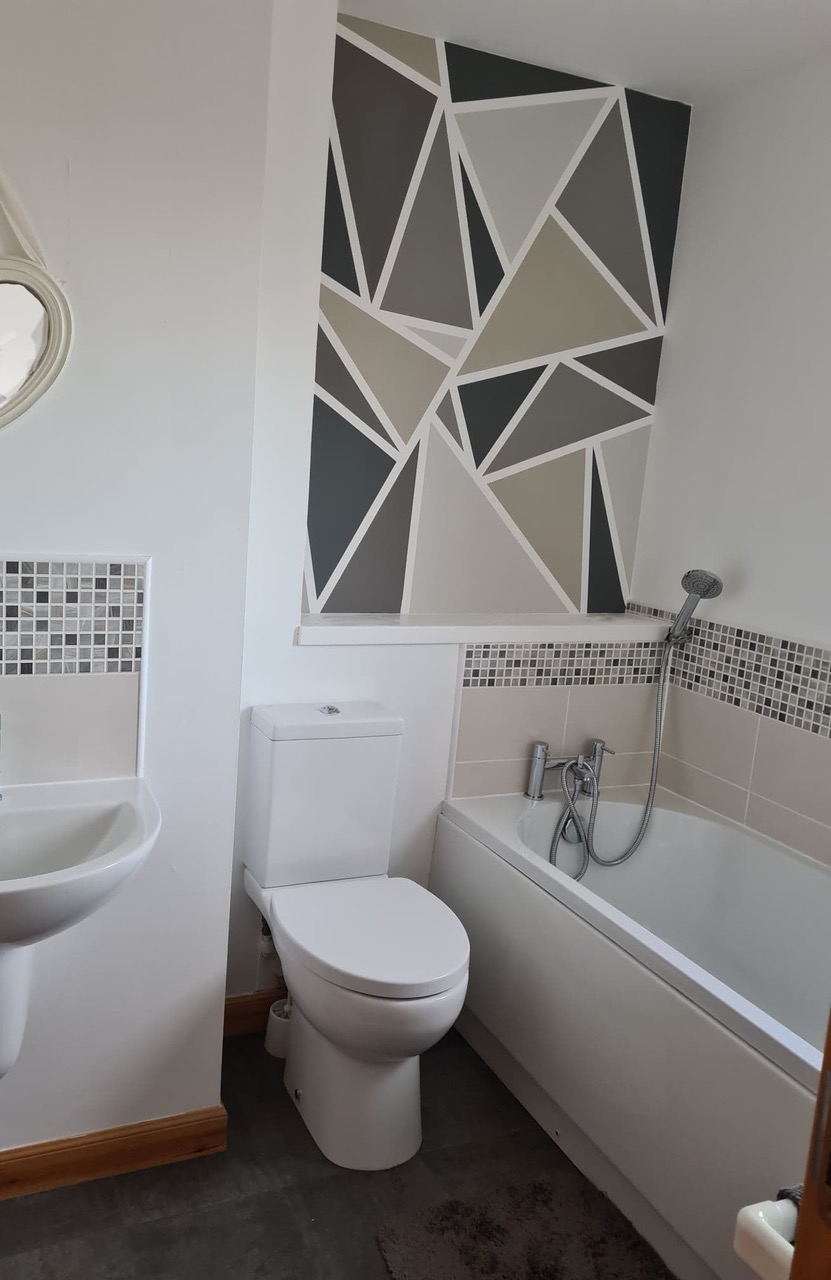 "Thankfully we both think it looks great – it really brightened up the kitchen and gave the illusion of it being bigger.

"Anyone who has been in our home since doing it has had nothing but really great comments on it, which is really nice.”

“It just shows that using budget materials such as frog tape can really pay dividends.

“With Black Friday coming up, retailers will be slashing the prices of DIY materials as we get into November, so if you’ve been planning a wallet-friendly renovation at home, now’s a great time to start stocking up on supplies.”

Plus a DIY fanatic quoted £300 for designer wood panelling does it herself on the cheap – and you’d never know the difference.

Meanwhile, this dad surprises son with a bedroom makeover – but gets a SERIOUSLY unimpressed reaction.