In November, while the nation waited for the presidential election to be called, Laurence Cheatham, 34, an artist in the New York City area, picked up his coloring pencils and began to work.

He started by drawing an image of John Lewis and Elijah Cummings in the clouds, looking down at Earth. As the days went on, Mr. Cheatham added Ruth Bader Ginsburg to the sky. And, when Arizona was officially called for the Democratic candidates, he added John McCain, a former Senator of that state. The four hovered above an image of Kamala Harris and Joe Biden in an embrace.

The final product is an example of a visual tradition in Black culture that usually circulates during two specific occasions: When a Black person ascends in society or dies. In this case, the moment came when Ms. Harris, was sworn in as the first woman and the first Black and South Asian person to ascend to the position of Vice President.

The tradition, which often uses heaven as a symbol of good conquering evil, are often crude, cut-and-paste montages of historical figures by unsigned artists. Once made for T-shirts and posters, now these images are shared online.

In them, the main character du jour is usually surrounded by Malcolm X, Rev. Dr. Martin Luther King Jr., or any civil rights activist. They are also commonly joined by athletes including Kobe Bryant, or other prominent figures in Black culture, like Tupac Shakur and Biggie.

And moments after Ms. Harris placed her hand on Thurgood Marshall’s Bible and took the oath of office, the images began circulating on social media.

It’s hard to pinpoint an exact time when these works began to merge into the mainstream, according to Aaron Bryant, a curator at the National Museum of African American History and Culture. But “they have been around for a long time,” he said.

“Throughout art we have always celebrated folks that we see as heroes. They become a symbol of good conquering evil,” said Mr. Bryant. “That is really central to just telling stories — and history is really about telling stories.” 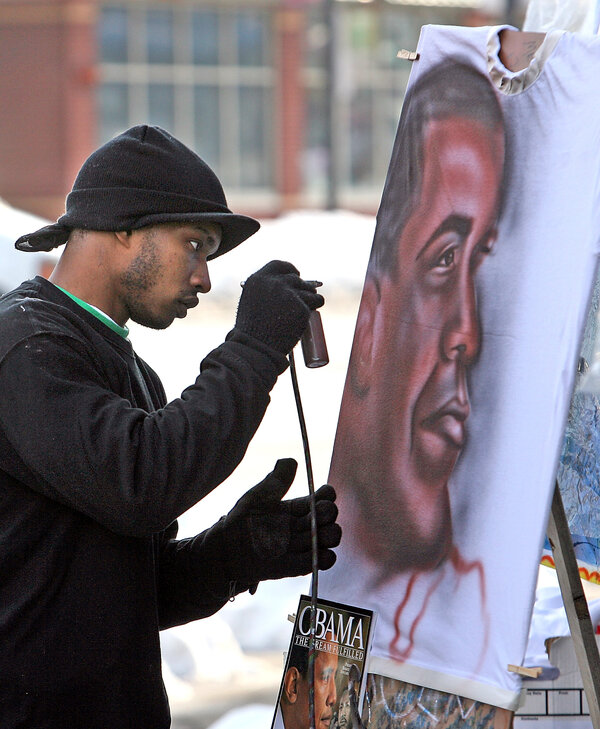 For Desus Nice, the comedian and journalist, it was easy to remember where he first saw a similar image: a mural at the 125th Street two and three subway stations by Faith Ringgold called “Flying Home: Harlem Heroes and Heroines.” The glass mosaic on the platform wall was completed in 1996 and depicts Malcolm X, Sugar Ray Robinson, Josephine Baker, and other figures integral to Harlem’s history flying through the notable Manhattan neighborhood.

These days, he recoils at some of the images he comes across online. Images of Malcolm X baptizing Tupac, or Supreme Court Justice Ruth Bader Ginsburg shooting dice in an alleyway with rappers who have died are more of a troll, Desus said.

“It is a surprise,” Desus said. “For example, if they’re doing the inauguration, they’re like, ‘OK, let’s do a little Crispus Attucks and Kobe Bryant.’”

Regardless of the obvious punch lines in some of the works, some people — “older aunties,” according to Desus — share the images earnestly on social media.

“It’s a way for people to memorialize people,” Desus said. “There is a pride to it — that part of it isn’t cringe. You have to kind of balance it.”

While some of these images are camp or cringe, Mr. Cheatham’s image of Ms. Harris was sincere. “I wanted to do something less comical,” Mr. Cheatham said. He was responding to the tension between Donald Trump and John McCain, before Mr. McCain’s death. “And then I watched Arizona turn blue. It felt like John McCain’s response from beyond.”

What makes these images particularly Black is that they aren’t made for the white public, he said. “If you don’t get the reference, you’re not going to enjoy it,” Desus said. “They’re not made in a way that is for general consumption. There is definitely a hood angle to it in that they’ll do something that if you’re not from the hood you’ll take the whole memorial as blasphemous. It is like graffiti in that way.”

Edwin Sacasa, who works as Shirt King Phade, began airbrushing similar images onto T-shirts in the late 1970s and in the 1980s did work for rappers like LL Cool J and Nas. Initially these were memorial tees and they spelled the name of the person who had passed, their nickname and some graffiti style motifs. The deaths, usually involved with the crack epidemic of the 1980s, soon became too many — and Mr. Sacasa’s customers began requesting more hopeful imagery.

“As the death culture became more prevalent, you still want hope,” Mr. Sacasa said. “No matter how the person might have been living, that person might have had a dream and that dream became deferred. That was the beginnings of combining different genres.”

Mr. Sacasa’s clients soon stopped asking for their loved ones’ names on their custom shirts and began to ask for renderings of people they looked up to while they were living. Someone that may have lost their way can be remembered by the people that motivated them in life, not by the horrifying scenes that ended up taking so many young Black lives in the 1980s and 1990s.

The Black existence in the United States is centered on surviving extraordinary trauma, family and ancestral rupture. Clinging to the images of people that served as heroes to the community is par for the course, according to Baratunde Thurston, a writer and comedian.

“When I see these celebrations of life or acknowledgment of deaths and the linking of some of these greats, I see us trying to love ourselves and take ownership of ourselves,” Mr. Thurston said. “We have only been allowed a few heroes, so when anyone approaches that height, through life or death, we have to recognize. We aren’t going to wait for you to name a street. We are going to claim and honor our own.”