In California, the color of suffering is the juicy purple of seedless grapes. In Alabama and Alaska, it’s blood-colored. Blue signifies safety in many states, unless the blue is navy and you’re in Utah, in which case it communicates total catastrophe — the worst conditions possible. In New Mexico, nothing is better than green except for a color the governor’s office used to call “green-plus,” before it was changed to turquoise.

If you live in one of the roughly 20 states that signal coronavirus restrictions with hues (often in direct relation to infection rates), the colors have exerted greater influence over your life than almost any other authority, dictating whether your neighborhood bar is open and how many people in a nearby town are permitted to get haircuts simultaneously.

If you live in a place where the colors represent tiers of “guidelines” rather than mandatory constraints — Oklahoma, for example — it’s possible you never got into the habit of paying attention to them. Residents of other states — Maryland and Georgia, for instance — might be surprised to learn that some parts of the country are doing anything with colors at all. 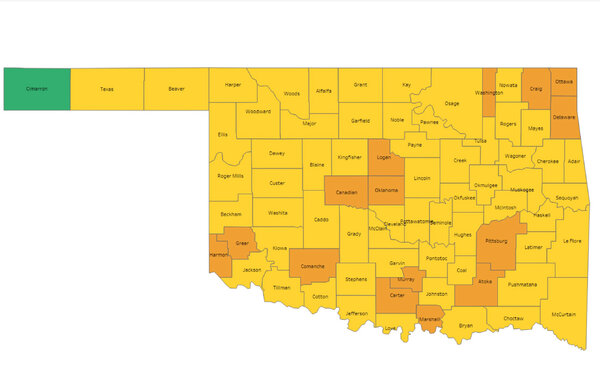 The Colorful Maps of Covid-19

Even in places where color-based rules are law, the hour draws near when widespread vaccine availability will curtail the coronavirus’s spread. The colors, stripped of relevance, will fade from memory like pigments from an 18th-century celestial atlas — except that they will go much more quickly.

The past is littered with the forgotten minutiae of crises. In truth, hindsight only seems to provide a circumspect understanding of history.

For instance: It is relevant, a century later, that local enforcement of aggressive social distancing measures during the 1918 pandemic portended significant health and economic benefits — and so those measures are recalled, examined and appreciated.

Yet it is also the case, although we do not dwell on it, that in the fall of 1918, American newspapers were constantly begging readers to save as many peach pits and nut shells as possible (“Residents of New Orleans Said to Have Failed to do Their Share,” lamented an article in the Times-Picayune on the topic).

Just because a detail is no longer germane does not mean it lacks value; the quality of being even a little bit interesting may be enough to justify committing it to record. It is changes in routine, after all, that distinguish the present from the past.

Gone today is the drive behind papers’ once-daily exhortations for readers to hold onto cherry stones, olive pits and hickory nut shells: a nationwide Red Cross campaign to transform the organic material into charcoal mask filters for the protection of American soldiers against German chlorine gas. (Also: The colored maps of Covid-19 could not have existed during the 1918 pandemic because there was no easy, inexpensive way to convey colored images to millions of people simultaneously.)

In short, it is too soon to know if the country’s idiosyncratic Covid guidance maps will assist future attempts to combat a pandemic, or merely exist as useless curiosities.

But there is already something meaningful preserved in hues that stretch from creamy corn-silk yellow to screaming candy-apple scarlet: a wildly colorful — abstract, and at times contradictory — portrait of a land in chaos.

From state to state, the frameworks’ particulars (how the hues are ordered; what they mean; the degree of authority they convey), could be said to display either rhyme or reason, but not both.

For example, many places evaluate coronavirus metrics (cases per 100,000 people, say) on a county-by-county basis, and distribute colors they have assigned to those values accordingly.

It is unsurprising, then, that the most basic questions — What color conveys safety? Or danger? — received no consistent answers.

Karen Cheng, a professor of visual communication design at the University of Washington, said over Zoom that “the most sensible” option for conveying safety information to the general public in the United States — in every state — would be via a red/yellow/green tricolor palette.

This is, after all, the nearly uniform color scheme of the nation’s traffic lights and road signs. (“Red is pretty strong here as a warning color,” she said. “Caution signs are yellow.”)

No state currently uses that. But a handful of places, including Alabama, use red/yellow/green plus a middling orange level: red/orange/yellow/green. Orange, Professor Cheng said, is the hue she would recommend if four were needed — because it has a logical place in our mental color spectrum. We understand orange as a mix between yellow and red.

Professor Cheng also praised Alaska’s map, which features a three-tier red/orange/yellow system, for incorporating changes in value (that is: the relative darkness or lightness of a color) as well as hue (which tells us, for instance, whether a color is blue or yellow) to convey escalating alert levels. Because Alaska’s levels exist on a dark-to-light continuum (red not only red but also the darkest color; yellow not only yellow but also the lightest), its map is easily understandable, even in black and white.

Many maps’ issues were simply matters of taste. Oregon’s shades appear to have been chosen from a smoke-damaged Crayola set. Hawaii’s Kauai County introduced what Professor Cheng described as a “useless problem” by employing yellow text on a white background in its Covid tier tracker. (“Yellow never reads against white,” she said. “Kids always do that, all the time: ‘It looked good on my screen!’ Doesn’t matter. Doesn’t work.”) Landlocked Utah’s decision to render every transmission level a different shade of blue gives its all-county map the appearance of a Utah-shaped ocean of varying depth. (Professor Cheng still praised the state’s use of a straightforward dark-to-light continuum.)

The most frustrating maps were those that, at first glance, might appear the most organized, with a wide array of colors.

Rainbow maps are “known to be ineffective,” Professor Cheng said, because the hues do not “map consistently and logically for everyone.”

For instance, adding blue to the red/yellow/green color mix can throw internal motion gauges out of whack.

“There’s a moment where you’re like, ‘Well, what’s blue mean?’” she said. “It’s very hard to violate your internal schema.”

Overcoming ingrained color meanings was a problem members of the Red Guard encountered during the Chinese Cultural Revolution, said Professor Cheng, when they launched an ad hoc effort to change the meaning of stoplight colors. The idea was that red, the color of the Communist Party, should mean “go.” It didn’t stick.

(Across America’s harlequin Covid maps, meanwhile, the appearance of “red” is subjective. “Red” is magenta in California, brown in Indiana, and salmon pink in Colorado. In Alabama, it is red.)

Even those states that incorporate blue disagree on whether it connotes conditions better or worse than green: On North Dakota’s color dial, blue (“new normal”) represents the safest tier, one level below green (“low”). Colorado reverses the hues, placing the safest tier — green (“protect our neighbors”) — a rung below blue (“caution”).

Colorado’s map presented other issues for Professor Cheng. For one thing, in addition to blue, it incorporated a surprising wisteria (“purple” — a level worse than “red”), bringing its total divisions to six — twice the number she recommended as ideal, based on common mental models like the three-part phone number format.

And, she said, for a map meant to convey danger and urgency, Colorado’s Easter egg colors were a confusing choice: “It’s very sweet,” she said.

But Professor Cheng’s greatest ire was reserved for New Mexico’s display — a map that, in its original red/yellow/green form, was the only statewide alert system that met her ideal criteria. A mid-pandemic redesign incorporated what was, for her, the biggest misstep of any state’s map: turquoise.

“I just don’t think that’s the logical end point of this spectrum,” she said, baffled.

Turquoise, he said in an email, “as both a mineral and color has deep cultural resonance in our state, having been mined here for centuries,” and is, he said, “often associated with a certain authentic New Mexico-ness.”

The Turquoise Trail, a National Scenic Byway that connects Albuquerque to Santa Fe, is indeed a popular road trip route in a state that offers a standard turquoise license plate option on its turquoise-colored Motor Vehicle Division website.

The idea to allow counties to progress to a fourth tier, even less restrictive than New Mexico’s original highest green tier, was a topic of internal discussion for weeks before its design and rubric were finalized, Mr. Stelnicki said. Around the governor’s office, staff referred to this level with the unofficial name “green-plus.”

Governor Lujan Grisham’s use of the vague term in a February news conference hastened the need to identify exactly what color green-plus was. The idea for “turquoise” came from a member of the governor’s legal counsel, Kyle Duffy.

“There was no debate at all,” said Mr. Stelnicki. “It was the kind of suggestion that registered as sensible on its face with everybody here. So, good job to Kyle for thinking of it.”

Professor Cheng chuckled and grimaced over Zoom when she realized the state had chosen the illogical color in a moment of New Mexican pride.

She wasn’t surprised the official guidance fell short of ideal visual standards. Government in the United States “has been traditionally a source of terrible design,” she said. “They just don’t have the resources. They don’t prioritize it.”

But, she added, “maybe rightfully so.” Legislative budgets are finite, after all. “Maybe they need more social workers, not graphic designers.”

Effective design, she said, is not something Americans have come to expect from the federal government.