A figure emerges from the Brasserie Lipp, the famous old Parisian restaurant where Apollinaire and Cocteau once dined, striding onto the cobblestones of a dimly lit, deserted street in the protective embrace of a striped knit. It is half poncho, half puffer, with the sweep of a Musketeers cape. Caught on film, she is serving not croque-madame, but rather notice to the world: There’s a new Chloé girl in town.

Yes, that mythic fashion creature who has been through more designer reinventions than Madonna is being reinvented once again.

Created by Gaby Aghion in 1952, the Chloé girl romped in the Provençal flower fields thanks to Karl Lagerfeld, went a little more risqué under Martine Sitbon, became Lolita-ironic under Stella McCartney, and turned baby-doll cool via Phoebe Philo. She was somewhat confused in the hands of Paulo Melim Andersson and Hannah MacGibbon, relaxed and accessible with Clare Waight Keller, and edgily bohemian under Natacha Ramsay-Levi. 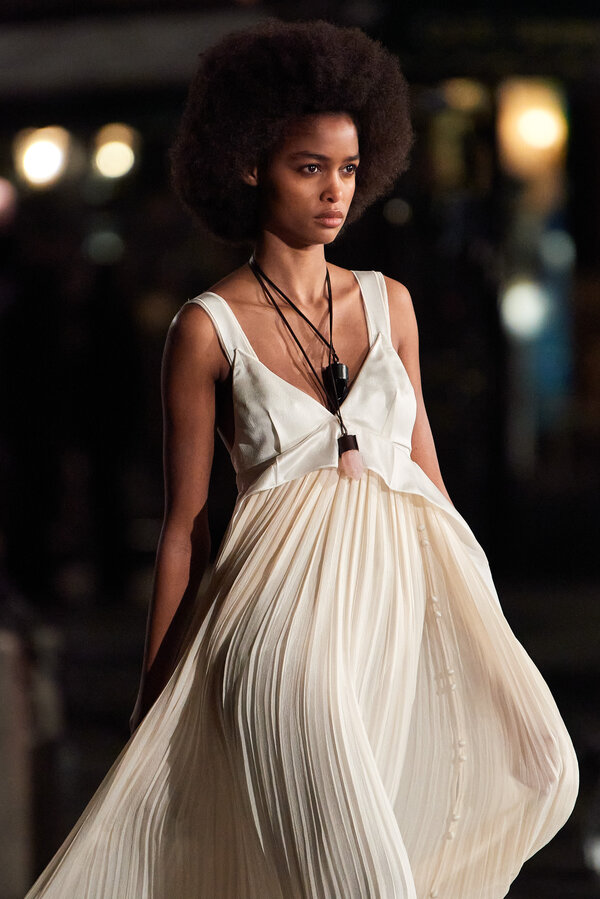 So who is the Chloé girl now, in the creative hands of Gabriela Hearst, the Uruguayan-born New York-based designer with an environmental bent and an obsession with fabrications (so much so that before the digital show, she sent a box of swatches — 43 in all — to virtual attendees so they could feel the knits, silks and tweeds for themselves)?

She’s a woman. And she’s attuned to the issues of the world.

Ms. Hearst’s debut collection was an ode to the haute homey, partly crafted from recycled cashmere and other sustainable materials, as well as upcycled deadstock — that is, the literal materials of the brand’s past, out of which she laid her foundation.

If it wasn’t exactly boundary-pushing, it had a certain unfussy flair. Besides, messing with silhouettes or social identity has never been Ms. Hearst’s calling card; she’s more of a luxury naturalist. Plus, she and her sustainable agenda arrived at the house only two months ago.

Fifty versions of the Edith bag, arguably the brand’s most famous former “It” bag, were bought on eBay and remade in materials gathering dust in the atelier. Leather coats with a 1970s swagger were patchworked together from scalloped remnants. There were long, body-skimming gaucho-meets-Sonia Rykiel striped sweater dresses and more sedate pebbly versions of the same; the occasional nightie gown; and a whole lot of sheepskin and fringe of the urban (and urbane) kind. Also specially-made ceramic buttons and Moonbooties (a collaboration) with linings made from recycled cashmere

And there was what looked like a sweeping greatcoat made of upcycled silks in various shades and prints, that turned out to be an inside-out version of a Sheltersuit, a garment created by a Dutch nonprofit with a technical outer shell that can be zipped together and turned into a sleeping bag for the homeless.

Though the Chloé Sheltersuit will not be produced, Ms. Hearst worked with the nonprofit’s founder, Bas Timmer, to create 1,000 traditional backpacks made from similar deadstock. For every bag sold, two Sheltersuits will be donated.

It’s a start, in more ways than one.