Tibi is giving pandemic-era lessons in personal style, and finding new paths forward for its business. 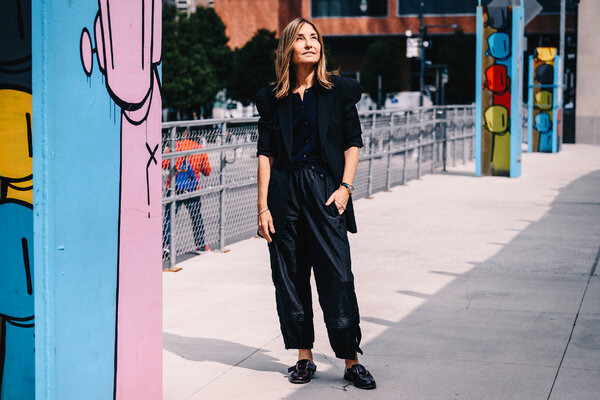 In late April, Amy Smilovic began streaming live from the Instagram account of her fashion label, Tibi. About once a week, she and Dione Davis, her styling director, would put on Tibi outfits and talk — easily, authoritatively — about how the clothes made them feel.

“When you feel good about the outfit that you’ve put on, your confidence just can go through the roof,” Ms. Smilovic said in one early episode, after Ms. Davis modeled a pair of tailored bloomers. In the same session she wryly compared her pandemic state to a “walking pharmaceutical commercial” whose list of symptoms included crying in the shower and sending emails at 4 a.m. Ms. Smilovic believed a good outfit could help with that too.

Tibi designs clothing for “creative pragmatists,” a term Ms. Smilovic, 52, coined late last year to describe a style she had long struggled to describe. The look is about balance — being modern but not edgy, she says, and chill but not bohemian. As she once advised on Instagram, where she also occasionally ribs Lululemon moms, Bravo stars and yogurt-straining yogis: “when u dress interesting u will feel interesting.”

From a design perspective, this usually means adding unusual twists to familiar closet staples: an oversize blazer with slits at the elbows; jeans that look as if they’re being worn backward; a crew-neck sweater with rounded shoulder pads. Ms. Davis called the weird accents “Tibi Easter eggs.”

As the summer continued, the styling sessions evolved. Instagram Live had become a popular feature in the pandemic as people (or brands, mostly) sought new ways to connect with homebound followers. At the beginning, Ms. Smilovic and Ms. Davis streamed from their homes, splitting the screen in half.

When they were allowed to return to their SoHo storefront and Wall Street office, the live sessions became more polished (but not too polished), eventually overseen by a filmmaker on staff. By September, viewership had grown from about 5,000 to 20,000. Some of the products featured were selling out online within days, they said.

Elaine Chang, the president of Tibi, had a theory about why the videos were resonating: “When all of us were consumed by 24/7 fight-or-flight mode, being able to share in Amy’s conversations about fashion and what it means for people reminded us of human potential,” she said. “There is a light at the end of the tunnel.”

The good news was that Tibi’s customer base was growing, with Instagram now driving 10 to 15 percent of all sales, the company said.

The bad news was that the world was still a catastrophe. There was no tiptoeing into this summer of hell — a season marked by widespread illness and staggering death tolls, police brutality and mass protests. Unemployment spiked. Industries collapsed. Sales at clothing and accessories stores dropped more than 50 percent.

One day Ms. Smilovic was jetting off to Paris Fashion Week, her label on track to pull in $55 to $60 million in sales in 2020. Three weeks later, she was laying off 44 people — more than half of her company — and cutting salaries for the rest.