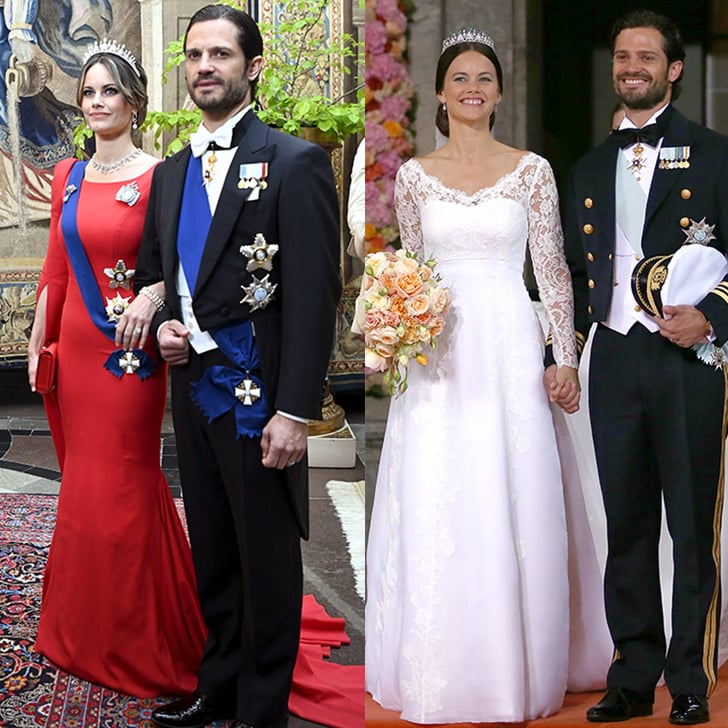 Princess Sofia of Sweden recycled her wedding tiara when she attended a banquet dinner at the Royal Castle in Stockholm on Tuesday, May 17. Royal family enthusiasts will recognize it as the showpiece she wore down the aisle in 2015 to marry Prince Carl Philip, as it has the same diamond base. However, in 2017, Sofia updated the design to replace the pear-shaped emeralds that lined the top with a series of pearls instead.

Fashion admirers first noticed the tweak at the Nobel Prize Award ceremony. But during the gala — hosted by her in-laws, King Carl XVI Gustaf and Queen Silvia — Sofia embraced a thoroughly regal moment, allowing the refurbished tiara to shine. She chose a scarlet mermaid gown complete with floor-length bell sleeves that extended into a train. The royal finished the look off with pearl drop earrings, tying in with the stones on her crown, with her diamond choker reflecting the shape of the lower band on which the pearls are set. A red envelope clutch, a brooch, and her blue ribbon of badges completed the look.

When she first debuted the tiara (a gift from King Carl and Queen Silvia) on her wedding day, she coordinated it with Bernadotte family earrings and her lace-embroidered, sheer-sleeved dress wedding gown by Swedish designer Ida Sjöstedt. Today, we appreciate Sofia’s vision of repurposing her sentimental piece on a special occasion.

The fête, where Princess Victoria and Prince Daniel also made an appearance, marked the first state visit between Finland and Sweden since 2015, the same year as Sofia’s wedding. Following the event, both country ambassadors submitted written applications to join NATO on Wednesday, May 18.