Crown Princess Mary of Denmark, 50, is the wife of Crown Prince Frederik of Denmark. Frederik is the heir to the Danish throne, and if he becomes King, Mary will automatically become Queen of Denmark. The royal couple married in 2004 and have four children.

Since her wedding to Frederik in 2004, Mary has worn a vast number of various jewels, from tiaras to bracelets.

Interestingly, she is the only member of the Danish Royal Family to have worn jewels from the Danish Ruby Parure since 2004.

This Parure is an heirloom set of jewellery that was made for Désirée Clary Bernadotte, who later became Queen Desideria of Sweden, to wear at the coronation of Napolean and Joséphine in Paris in 1804.

When the Bernadottes ascended to the Swedish throne, the ruby jewels became part of the royal collection. 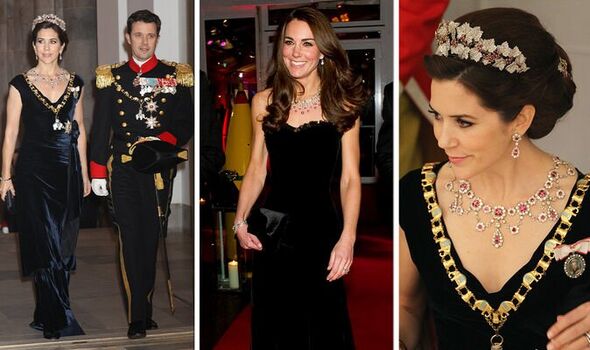 The jewels were then handed down the generations of Danish monarchs, after arriving in Copenhagen in 1869 when Princess Lovisa of Sweden married the future King Frederik VIII of Denmark.

Since then, Queen Alexandrine and Queen Ingrid have been seen wearing the jewels, as well as Crown Princess Mary.

The royal women made adjustments to the jewels too, altering them to make them more comfortable or suitable to their personal looks.

One of the main jewels in the set is the grand tiara.

This ruby tiara is one of the “most glamorous and regal ruby tiaras in Europe’s royal vaults”, according to the Court Jeweller.

Mary notably wore this tiara in January 2012, when royal from all over Europe visited Copenhagen for the celebrations of Queen Margrethe II of Denmark’s Ruby Jubilee.

A highlight was the white-tie gala dinner at the Christiansborg Palace, to which Mary donned a beautiful dark blue velvet gown.

The Princess combined the tiara with a pair of earrings and a necklace from the Ruby Parure.

The earrings and necklace are both adjustable: Mary opted for a subtle look when it came to the earrings, wearing only the stud and one pendant drop, but she went all out with the necklace.

The Princess donned the necklace in full, complete with its festoon and pendant sections.

Both the earrings and necklace match the tiara, brimming with both silver diamonds and red rubies.

Interestingly, Princess Mary’s ruby necklace is not unlike a piece the Duchess of Cambridge has worn on several occasions.

Most notably, Kate Middleton donned the ruby and diamond necklace in December 2011, when she attended the Sun Military Awards at the Imperial War Museum in London.

Like Mary, Kate wore a velvet gown for the event, which looked beautiful accompanied by the necklace, which was silver with protruding ruby flowers.

The floral fringe necklace was reportedly among Kate’s wedding gifts, but it is not known who gave it to her.