A HEARTBROKEN mum whose three-year-old is battling a cancerous brain tumour has pleaded with fellow parents to "cherish every moment" – as her son prepares to live out his final days in lockdown.

When little Xander first started experiencing bouts of dizziness and vomiting back in June 2019, his parents, Jo and Matt Deeley, thought it was down to a simple ear infection. 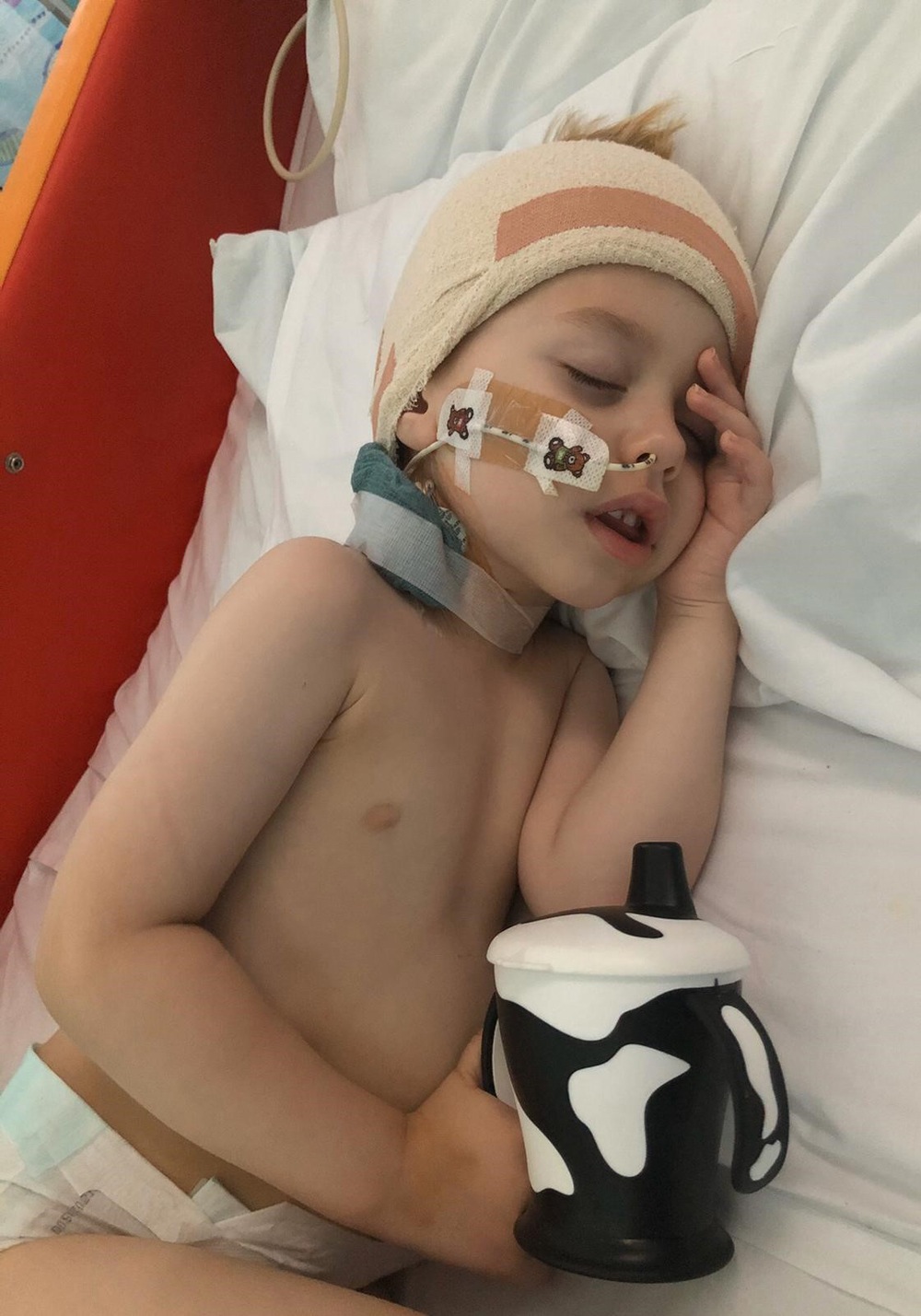 But they later discovered he had an aggressive brain tumour which, despite three major operations and other intensive treatment, has spread and cannot be cured.

Now Jo, 42, who works in insurance, Matt, 38, a dental technician, and their daughter, Elora, seven, are doing their best to make memories with little Xander.

As a vulnerable person, he's been told to self-isolate for 12 weeks at the family home in Solihull, West Midlands, to protect himself from the coronavirus.

Revealing her fears that this could mean him being in isolation for the rest of his life, Jo said: “It does upset me when I see people moaning and groaning about being stuck indoors while the country is in lockdown.

“So many people will come out of this and one day be able to return to their normal lives – but that won’t be the case for us. My child isn’t likely to be here at the other side of all this.

“I just want parents to realise how precious their children are. Yes, they can be testing, but being around them 24/7 while the schools are closed can also be a chance to make memories.

“We have to treasure every moment with our little ones.” 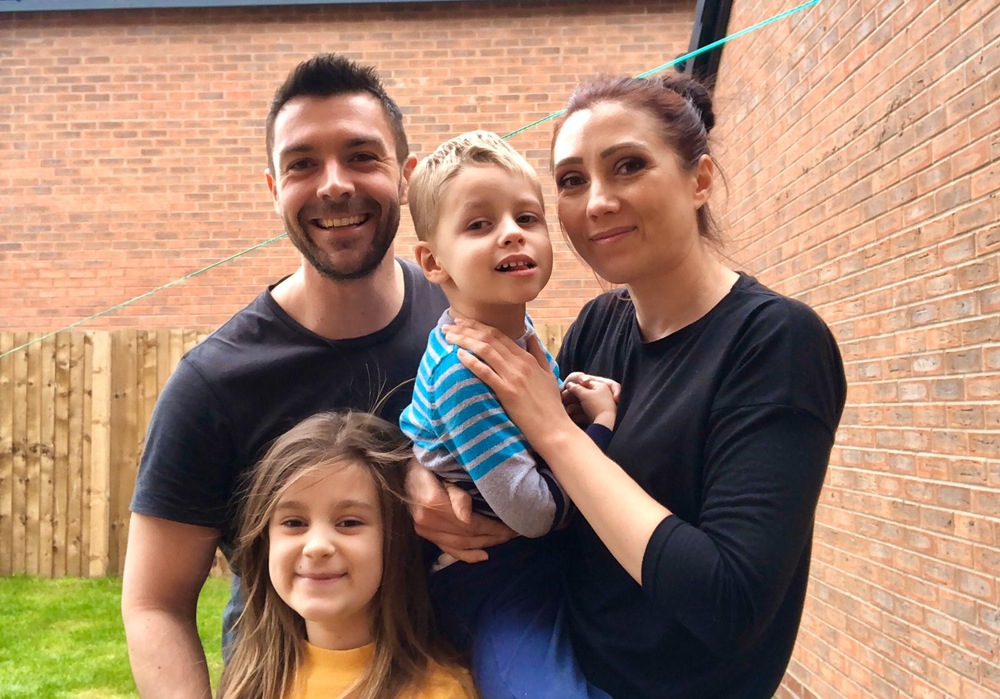 Speaking in reaction to this, Jo asked the public to think of people like Xander when they go out.

She said: “To see people still going out, sunbathing and having picnics in parks, like nothing has happened, is upsetting.

“I know it’s not everybody, but a handful of people still don’t seem to be taking this seriously.

“I’m sick of hearing people saying that if they got the virus, they would be strong enough to fight it off. It isn’t about us as individuals.

"We’re all in this together, and we need to think about the most vulnerable – people like Xander – and how to protect them.”

I’m sick of hearing people saying that if they got the virus, they would be strong enough to fight it off. We're all in this together, we need to think about the most vulnerable

Until June 2019, when he was hit with a nasty vomiting bug "out of the blue," Jo said her son was a "perfectly healthy little boy."

"He was in nursery at the time, so I assumed he’d just picked something up, like kids do,” she said.

“He would rally for a few days and seem fine, then go back to being poorly.”

Before long, he also began struggling with his balance, swaying to one side “as if he was drunk.”

And he started screaming whenever she laid him down for a nap, clutching the back of his head as though he was in pain.

To be on the safe side, Jo took Xander to the doctor, where she was told it was probably an ear infection and given antibiotics.

When the tablets had no impact, she returned to the GP and even went to A&E when his vomiting became particularly serious, but medics did not think it was anything sinister.

“Everybody just thought it was a particularly bad ear infection, as they can affect balance,” she said. “I certainly don’t blame the doctors – they did the best they could.” 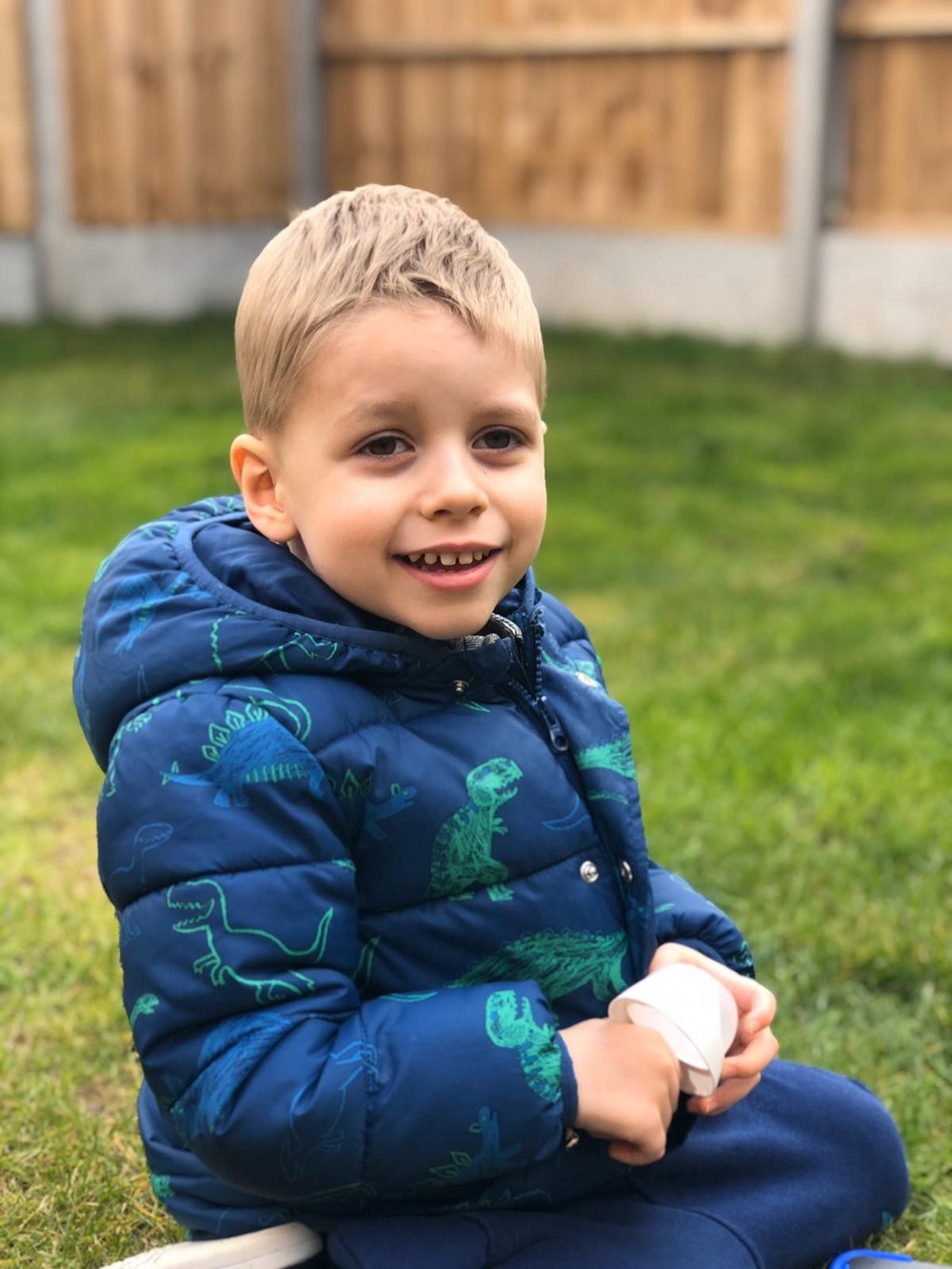 Meanwhile, Jo did her own internet research and found HeadSmart, a campaign by The Brain Tumour Charity aiming to reduce diagnosis times by highlighting the signs to watch out for.

Reading the list of symptoms on their website, her heart sank as she recognised several displayed by her little boy.

In July, she made an urgent dash to casualty at Birmingham's Heartlands Hospital when Xander's vomiting returned. This time, tests showed his blood sugar to be dangerously low.

Admitting him, doctors ran an MRI scan, which revealed a worrying mass in his brain – breaking the news to Jo and Matt that Xander had a tumour.

“I’d already prepared myself for the news, because of what I’d read online, but hearing it out loud was very different,” she said.

“The mass was about the size of a golf ball – so large it was pushing the rest of his brain to the side.

“I felt overwhelmingly guilty – that I hadn’t pushed more for a diagnosis and poor Xander must have been going through hell.” 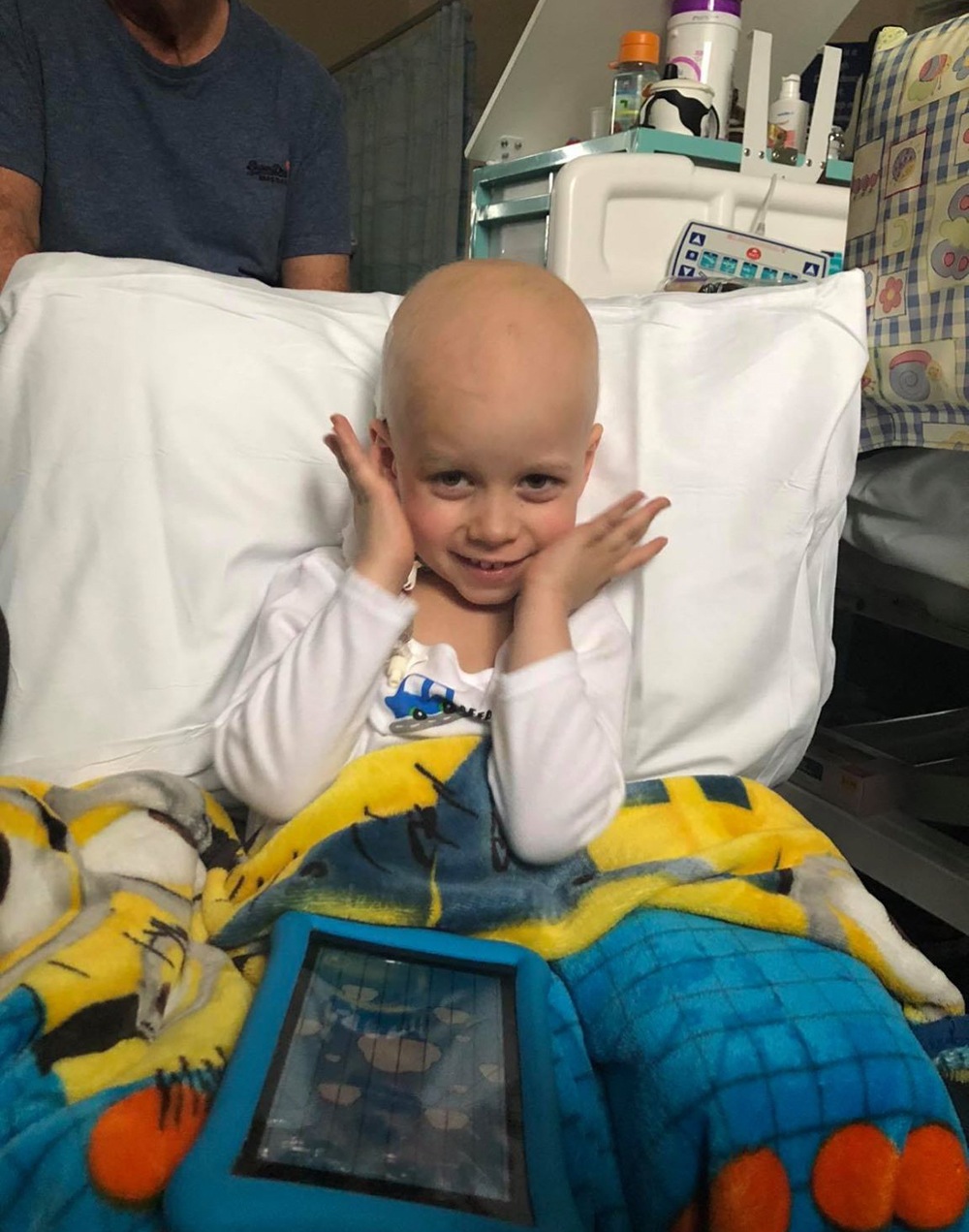 Due to the size and precarious position of the tumour, doctors knew they had to operate quickly, so transferred Xander to Birmingham Children’s Hospital, where he had surgery the following day.

During the 12-hour procedure, medics removed the bulk of the mass, but had to leave some residue behind, as it had wrapped around his brain stem.

“That basically controls everything – the flow of messages from the brain to the rest of the body, and basic functions like breathing, swallowing and consciousness,” Jo said.

“It was just too dangerous to operate near there, as one wrong move could have left Xander in a vegetative state for the rest of his life.

“Seeing him come to was really frightening. I remember handing him his favourite toy and he started shaking it, like he used to do back home.

“Seeing that, I thought, ‘There’s still some of Xander left in there somewhere.’ I was just so relieved he was alive.”

After his operation, Xander remained in hospital for three weeks recovering, with his parents taking turns to be by his side while family members helped with Elora.

“We’ve always been completely honest with her. We just didn’t see the point in lying, in case something happened further down the line and we had to explain all over again,” said Jo.

“I’m not sure she understands the severity of his condition, but she knows Xander has a brain tumour.”

Xander was eventually diagnosed with grade three Anaplastic Ependymoma – meaning the cells divide rapidly and are abnormal in their structure.

According to Cancer Research UK, just 30 children are diagnosed with ependymomas in Britain every year and the tumours usually develop in the cerebellum, at the back of the brain above the spinal cord.

“Xander’s prognosis was never great, as he was fighting such a rare type of tumour,” said Jo.

“We knew the survival rate would depend on how much surgeons could remove, and knowing they couldn’t get it all meant he would never make the age we’d wanted him to.”

In August last year, Xander had a second bout of surgery to try and remove more of the mass, before beginning three months of chemotherapy.

“Sadly the chemo didn’t work,” continued Jo. “The tumour actually grew while he was having it, despite us trying three different drugs.”

Xander had a third operation to remove some of the regrowth in November 2019 – this time lasting a mammoth 13 hours – and a six-week course of daily radiotherapy at Birmingham's Queen Elizabeth Hospital.

Jo said: “The radiotherapy was more to make the cancer cells dormant, so that we could buy some more time with him.

“As chemotherapy had been ineffective, treatment became more about prolonging his life than curing him.

“He went through so much. After one of his operations, his nerves were damaged, so he had to learn to swallow all over again. He absolutely loves eating and was so frustrated not to be able to.

“Despite everything, he is such a happy, loving little boy. I’m not just saying this because I’m his mum. He truly is a joy.”

Because the Covid-19 outbreak means things like clinical trials are on hold, every last little bit of hope has been snatched away from us

Xander’s radiotherapy finished in February, and the plan was to conduct regular progress scans to check for regrowth.

But just six weeks later, in mid-March, a scan showed the disease had spread and two new tumours had sprung up on his spine.

“We knew it was bad when the hospital called us to say we had to come in person, despite the country locking down due to the coronavirus,” said Jo.

“To be blunt, it was game over. They told us very gently that there was nothing else they could do. It was absolutely devastating.

“Because the Covid-19 outbreak means things like clinical trials are on hold, every last little bit of hope has been snatched away from us.”

Reeling, Jo had no choice but to take her little boy home and make the most of his remaining time.

His exact prognosis is unclear, as it will depend on how scans to
monitor him go, and whether or not he is able to have radiotherapy on the tumours on his spine.

But his immune system has been compromised by the treatment, meaning Xander must remain in isolation for 12 weeks.

“In a sense, it’s almost a relief that Matt and I can’t work at the moment because of the virus, as that means we can spend every single day with Xander and Elora, making memories as a family,” said Jo.

But the nationwide lockdown also means that special plans like a trip to Disneyworld, or one last visit to CBeebies Land at Alton Towers are not going to be possible for the foreseeable future.

“We’ve had to cancel a lot of plans,” continued Jo. “We can’t do simple things like take him to the park, or down to the beach in Devon, which we used to love doing as a family.

“His immune system is too compromised. It’s too much of a risk.

“At the moment, we cannot even see other family members or friends – it’s literally just the four of us at home.

"If things do take a turn, though, we’ll obviously have decisions to make then about who can see him and how to make it happen.”

For now, the Deeleys are at home together, making the most of every precious second.

By speaking out, Jo wants to both raise awareness of the symptoms of brain tumours in children and to thank the charity CLIC Sargent, who have been an unwavering source of support in her darkest hour.

The charity – the UK’s leading one for children and young people with cancer – has launched an emergency fundraising appeal to help families in crisis, struggling with the emotional and financial fallout of the coronavirus pandemic.

The appeal comes as they are dealing with a huge increase in demand for their social work support services, from anxious parents worried about their child’s risk of infection, families separated by isolation and those struggling both financially and practically.

Jo said: “CLIC Sargent have been there for us constantly. They check in with us and they aren’t just there for the cancer support.

“They brought an overnight bag for us for hospital and were there for us from the very start. CLIC Sargent have just been absolutely amazing – anything you want or need, any information or even just to talk, they are always happy to provide it.

"Our experience would have been very different without them. I want to thank them for everything they’ve done and for making our experience as good as it can be.”

The charity's Chief Executive Rachel Kirby-Rider is appealing for donations at this difficult time, as they endeavour to continue their vital work.

She said: “Cancer doesn’t stop for the coronavirus. The young cancer patients and families we support are facing a real crisis and need us more than ever.

"We will continue to fight to be here for those families like Xander’s, but we urgently need funding to do that.”