The last time Ralph Lauren had a real live fashion show, it was a doozy. That was way back in September 2019, when the world was in a very different place.

And way back in September 2019, he built a whole retro 1920s nightclub, dripping in crystal chandeliers and Art Deco, in an abandoned bank building in Lower Manhattan. Janelle Monáe performed, belting songs and climbing on tables and smashing Champagne glasses. It was all very Gatsby-fabulous and remember when.

In case you don’t, on Thursday night he recreated the event, sort of, with a black-and-white concert film of Ms. Monáe — as strong an argument as exists for Mr. Lauren’s double-breasted, nipped-waist suiting — crooning Frank Sinatra’s “All or Nothing at All” (as well as an assortment of her own tunes) in the gilded environs of Mr. Lauren’s Beverly Hills flagship. A drum set was framed in one corner by hanging racks; a sax player perched on a stool in another. 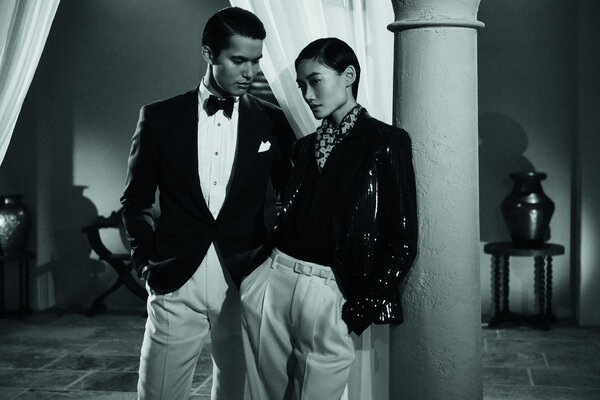 Beforehand, a black-and-white film starring Mr. Lauren’s spring collection had played. (He’s one of the few designers who has stuck to a see-now-buy-now schedule. Remember when?) The mood was very “Key Largo” and Bogie-Bacall, all bow ties and nautical stripes, gents in ivory suiting leaning an elbow on a baby grand and women in one-shouldered columns and slithery halter necks kissed by the breeze on a balcony. Originality has never been Mr. Lauren’s calling card, and he’s happy leaning into his particular brand of elegant nostalgia. The people in the picture may have gotten more diverse, but the storytelling has not.

Still, it wasn’t all throwback Thursday. After Ms. Monáe’s set, you could virtually tour the store and shop the racks. In other words, scratch the itch to go out that had just been ignited. It’s been flaring up all over.

Indeed, Mr. Lauren is not the only designer who thinks we’re due for some dancing and delight — and it’s time we got our closets ready.

“I think I just really miss going to a club,” Stella McCartney said on a Zoom call before the unveiling of her collection, an energetic mash-up of juicy color and exaggerated flares, swirling, Op Art prints and stretch satin ruching photographed in the Tate Modern.

“I think I just basically want to listen to really, really loud music and not feel caged in,” she continued. “To see the glitter and have an experience again.”

So apparently, did Junya Watanabe, who called his show “Immortal Rock Spirit,” which pretty much says it all. His muses were the big stadium bands — Kiss, the Who, AC/DC, Queen — and his building blocks were denim, concert tees and assorted collaborations, including with Versace, all spliced together in a sonic boom of clashing notes and invention.

Meanwhile, flares, that universal symbol of 1970s nightlife, are turning into a thing, seen at Raf Simons and Tory Burch.

Mr. Simons paired his (slouchy, liquidy) with gigantic knits, sleeves dangling to the knees and big, bulbous quilted jackets, plus the best accessory of the season: armbands made from little skeleton hands that can be worn wheresoever you please: the bicep, the tricep, the forearm.

Ms. Burch’s were more tailored and urbanized, in wide-wale cord suiting mixed with poplin shirtdresses complete with vests (remember the vest?), which was fitting given that her social nostalgia took the form of an ode to the … well, the Odeon, the downtown eatery that Ms. Burch said was her cafeteria when she first moved to New York. Yum.

Up, Up and Away

We’re all dreaming of the moment our yesterdays become tomorrow and we can escape the endless present. It has been a journey, folks.

For a recap, simply see Kei Ninomiya’s gorgeous abstraction of social distancing past, all bristling translucent porcupine spines and padded or metallic latticework, like portable personal gates. Or Jun Takahashi’s Undercover, a show that was like a quick trip through the psychodrama of the last year in 65 looks, from silky print pajama suiting through giant snugly knitwear and bow-tied baseball sweats, only to culminate in a flurry of butterfly prints and jackets like rainbow-colored blooms.

Still, perhaps no one has floated above as deftly as Rei Kawakubo at Comme des Garçons, who built the tropes of the Edwardian era into clouds: cumulous cutaway puffballs in black and white, lace and tulle, and crinolines, all topped by desiccated stovepipe hats from Ms. Kawakubo and the increasingly high-profile stylist and editor Ibrahim Kamara. Who, the show notes were quick to point out, “is not a hat designer” (italics their own). Time for all of us to try something new.