In the music video for “Solar Power” — her first single in four years — Lorde frolics on a beach, surrounded by people who dance and dine and pass her a bong made from a fennel bulb.

This is not the Lorde the world has come to know: a young artist processing her emotional wounds on critically acclaimed albums. But the world has seen enough darkness lately and so, apparently, has Ella Yelich-O’Connor.

While “Solar Power” captures this sentiment in its lyrics (“forget all of the tears that you’ve cried” and “let the bliss begin”), Lorde didn’t need them. Her choice of ensemble said it all: a canary yellow satin skirt with a matching crop top that hugs the bottom of her chest.

The outfit’s midriff isn’t subtle. There is no resemblance to the casual boxy crop tops of the last decade, nor to any other earlier variation: swimwear in the 1940s, athleisure cutoffs in the 1980s, the shrunken baby tees of Y2K.

This is more extreme midriff — the sort one should come to expect from Hot Vax Summer.

“It’s quenching a thirst among the younger consumer, catering to that festival style that they’ve been missing,” said Marian Park, a youth strategist at the trend forecasting agency WGSN. (This year, Rent the Runway reported that demand for crop tops, extreme or otherwise, has quadrupled compared to 2019.)

Lorde’s outfit, now sold out, was made from dead stock satin by Collina Strada, a label known for its sustainable practices and bright earthy-punk aesthetic. Its satin pieces in particular have attracted celebrity fans like Rihanna and Lady Gaga. 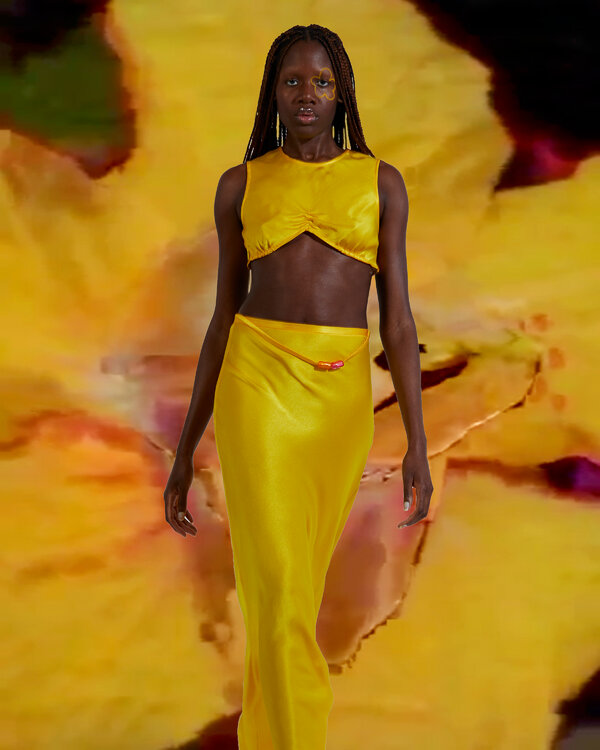 The yellow set from the spring 2021 collection — SZA also wore it on the cover of Cosmopolitan earlier this year — was the first time Hillary Taymour, Collina Strada’s creative director, had experimented with the underwire structure that made the crop top so severe.

“I wanted it to feel sophisticated,” Ms. Taymour said. “It’s for a girl who wants to look sexy but also supported.”

Ms. Park called the extreme crop top look an “exploration of sensuality for women, where it doesn’t feel so overtly sexy.” The style is an extension of lingerie dressing, which became unexpectedly popular early in the pandemic, as a kind of confinement indulgence. (People couldn’t dress up to go outside, but they could dress up to stay inside.)

But no label is defined by the extreme crop top — or by what Ms. Park called the “Instagram street-style peacock moments” driving consumers right now — more than Mirror Palais, founded in 2019 by Marcelo Gaia, a 30-year-old designer and former stylist.

One of Mirror Palais’s first pieces was the eye-catching “underwire polo,” a hybrid of a brassiere and a long-sleeved collared shirt.

When Mr. Gaia initially presented the concept to his patternmaker, she didn’t understand it, he said: “We had to work on it for a really long time before it actually fit.”

Then, when he introduced it on Instagram, “People were like, ‘What is this?’” Mr. Gaia said. “It was a bit polarizing. Some people were just in love with it and so excited about it, and other people I think found it to be kind of vulgar.”

The polo has since been worn by Bella Hadid, who turned the piece into what Page Six called “summer’s hottest top,” along with Ariana Grande and Rosalía. It has also been replicated by several fast fashion companies, much to Mr. Gaia’s frustration. (“I have very few regrets in my life, and my one regret is that I didn’t patent it,” he said.)

Mr. Gaia theorized that people are drawn to extreme crop tops both because of strides made by the body positivity movement — “the idea of: if you want to wear a crop top and you don’t have a six pack, go for it, your body still looks amazing,” he said — and the restlessness that came from spending a year “in hiding.”

“I think that it does take some confidence to wear something like that,” said Mr. Gaia, who is working on releasing a short-sleeved version. “But people are ready to have fun and to party and to live it up.”