Though Ilya Hoffman met Christiana Barkley during a basketball game, he wasn’t knocked sideways when he learned the identity of her father.

In May 2016, though, his friend Eric Magleby invited him to watch a replay of Villanova’s national championship game that season. A group of Villanova alumni had gathered at Mason Jar, a sports bar in Manhattan, and Mr. Hoffman was on the fence about joining them.

“Villanova grads are crazy, crazy basketball fans,” he said. “I didn’t go to Villanova.” He went to SUNY Albany for two years, then Baruch College, where he received a bachelor’s in finance and economics in 2009. “I thought, ‘I’m not sure this is the place for me.’”

But he went, and when someone pointed to one of the fans in the room and identified her as the daughter of Charles Barkley, the 11-time N.B.A. All Star, Hall of Famer and now television analyst for TNT’s “Inside the NBA,” his reaction was atypical. “I said, ‘Oh, you mean the guy from ‘Space Jam’? That’s where I knew him from. Some people might have been like, ‘Oh my god, Charles Barkley.’ To me it was like, ‘Look at this amazing girl.'”

Later that night, he invited nine Wildcats fans back to his apartment, six blocks away, for an after party. Ms. Barkley, a 2011 Villanova graduate who earned a master’s in journalism from Columbia in 2017, was among them. She thwarted his plan to be a generous host.

“I was like, ‘Guys, I have six slices of leftover pizza in the fridge,’” Mr. Hoffman said. “We’re going to throw them in the oven and split them up so everybody gets some. Christy pulled me aside and said, ‘I’m going to need two of those slices.’ We had just met two hours ago. It really showed her personality.” 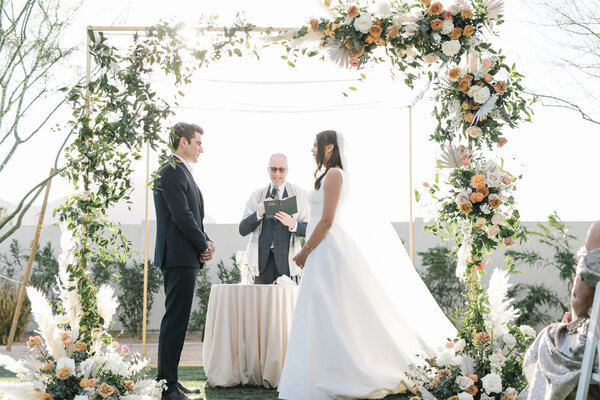 For Ms. Barkley, 31, the director of writing and senior account manager at the Koppelman Group, a college consulting company, a healthy appetite is something of a calling card. “People love having me to dinner because I never stop eating,” she said. After she and Mr. Hoffman started dating that spring, she endeared herself to his family while at the dinner table. On a first visit to his family’s home in Port Washington, N.Y., she asked Mr. Hoffman’s grandmother, Tamara Koliskor, for more matzo ball soup. That sparked an intergenerational love affair. “She’s a very grateful girl, and she does love matzo ball soup,” Ms. Koliskor said. “It’s impossible not to love her.”

Her affection for Ms. Barkley has since been well established among the family: “My grandmother is an old-school Russian Jew who’s hard to win over, but now I think she loves Christy more than my brother and me,” Mr. Hoffman said.

Mr. Hoffman was born in Moscow and immigrated to the United States in the late 1980s with his parents, Alex and Katia Hoffman, and brother, Ash. He grew up in Queens and later the family moved to Long Island.

Ms. Barkley is an only child. Mr. Hoffman’s first time meeting her parents, Charles and Maureen, in 2017 at their home in Scottsdale, Ariz., reinforced the expected when meeting a star of Mr. Barkley’s stature.

“I walked into their house and I was like, ‘That is a huge guy,’” Mr. Hoffman said of Mr. Barkley. But he left Arizona with a more complete picture. “When you go out to dinner with Charles, people can be pretty rude, like, ‘Hey, Charles, can I take a picture with you?’ But every single time he puts a smile on his face. He’s the most generous person. He never gets annoyed.”

He wasn’t even annoyed when he suspected Mr. Hoffman of dragging his feet about proposing to his daughter. In 2019, the couple moved to Killington, Vt. Both worked from home even prepandemic and loved the access to mountains, Ms. Barkley for hiking and Mr. Hoffman for skiing. “The biggest mountain on the East Coast is 10 minutes away,” Mr. Hoffman said. “I can ski on my lunch hour.”

[Sign up for Love Letter and always get the latest in Modern Love, weddings, and relationships in the news by email.]

During a Christmas trip to Scottsdale that year, he had asked the Barkleys for permission to marry their daughter.

“I had this vision in my mind of how it was going to go,” he said. “I had saved it for the last night we were there, when we were going to go out to dinner.” When Mr. Barkley announced he had to leave early for a trip and wouldn’t be able to make the dinner, Mr. Hoffman acted fast. “I approached Maureen and said, ‘Hey I want to talk to you. Can you ask Christiana to go to the store so we can have some privacy?’” Instead, Mrs. Barkley yanked him into her bedroom, where Mr. Barkley was preparing for his trip, for a 30-second chat.

Both approved. “I remember being really emotional about it,” Mr. Barkley said. “That’s not something that happens all the time.”

Back in Vermont, Mr. Hoffman gave himself a couple months to figure out the perfect proposal. “And then lo and behold there’s Covid and everything shuts down,” he said. When he still hadn’t proposed at the start of spring, Mr. Barkley started worrying.

Instead, Mr. Hoffman was trying to figure out how getting engaged during lockdown might look.

Ms. Barkley provided a hint. “She had mentioned to me that she saw someone on TV propose with a Ring Pop,” Mr. Hoffman said. “She was subtly saying that if I want to propose and I don’t have a ring, she would accept a Ring Pop.” By spring, though, Mr. Hoffman had a better plan in place. Through a family friend, he had found a jeweler in Manhattan to design a diamond engagement ring. On May 14, 2020, the day before Ms. Barkley’s birthday, he drove to New York to pick it up; along the way, he bought a Butterfinger and a Ring Pop.

Butterfinger is Ms. Barkley’s favorite candy bar. So she wasn’t surprised when, after a morning walk on May 15, he presented one to her as part of an at-home birthday celebration. “I was excited,” she said. While she tore into it with the usual gusto, Mr. Hoffman got down on one knee and presented the Ring Pop. That she found annoying.

“I thought he was making fun of me for even suggesting the Ring Pop, and that he was going to say something along the lines of, ‘It’s not going to happen today, but it will be soon,’” she said. Instead, he pulled the diamond ring box from its hiding place under the couch. “I said, ‘I love you, I want to marry you, I don’t feel right about proposing with a Ring Pop,’” he said. “She had chocolate all over her face.” She said yes, with enthusiasm.

On March 6, 120 friends and family members gathered for their wedding in Scottsdale at the Andaz Hotel. All had been Covid-tested just before, either on their own or through the help of Mr. Hoffman’s friend Marcus Howard, who had procured tests and set up a testing site at the Andaz, where out-of-town guests were staying.

Ms. Barkley, in a floor-length, sleeveless Reem Acra wedding gown, held a bouquet of white and pale peach ranunculus as she was escorted down an outdoor aisle by her father, who skipped his commentating stint during the N.B.A.’s All Star Weekend to be with his daughter instead.

Mr. Hoffman wore a dark suit and white shirt with an open neck and no tie. Beyond the huppah, woven with more ranunculus and greens, was a sweeping desert vista.

After a ceremony, led by Rabbi John Linder, that included the Jewish traditions of signing the ketubah and the bestowing of seven blessings, Mr. Linder pronounced them married. Cheers of “mazel tov!” erupted as Mr. Hoffman stomped a glass to mark the beginning of their new union.

Despite the Covid precautions, weeks before the wedding, Mr. Barkley offered to have medical professionals on site. But, as he explained to Ms. Barkley, and on “Jimmy Kimmel Live” days before the wedding, it wasn’t Covid he was so worried about. It was the hora, the traditional Jewish celebratory dance in which some guests are lifted in a chair.

He felt he needed to slim down before participating; Mr. Barkley is about 6 foot, 5 inches and weighs more than 250 pounds. Ms. Barkley said her father lost “a good amount” of weight before the wedding.

“But he was still very concerned,” she said. “He said, ‘I think it’s possible someone’s going to try and lift me up and they’ll get hurt, or I’ll get hurt.’” Though, while on “Jimmy Kimmel,” Mr. Barkley had called for “all Jewish people on deck” during the hora, it turned out they weren’t needed.

“He really was scared, but he got in the chair, and next thing you know he and my mom were up there,” Ms. Barkley said. “They had a blast.”

“It was the best weekend of my life,” her father said.

Where The Andaz Hotel, Scottsdale, Ariz.

The Elk, Please At an on-site reception, guests had their choice of steak, sea bass or elk for dinner, which was sort of an accident. “When we did our tasting we thought we’d have a few days to think about it,” Ms. Barkley said. But it turned out that their invitations were already being printed with the three options before they could change their minds. “My dad was stunned. He said nobody was going to order elk, but we had texted all our friends, like, ‘Please get the elk.’ About 30 people ended up helping us out.”

The Crowd Chose Zac Brown Mr. Barkley’s audience helped choose the traditional father-daughter dance. “My dad had been speaking about our wedding on his podcast, and he asked people to give him suggestions,” Ms. Barkley said. “The Man Who Loves You the Most,” was the favorite for its lyrics. For their mother-son dance, Mr. Hoffman’s mother chose a Russian song whose title translates to “I Pray for You.”

Minimoon After the wedding, the couple flew to Palm Springs for a friend’s wedding. They spent a few days there honeymooning.